It is true that in His grace and mercy, God has given us a temporary respite — a window of grace through the miraculous election of Donald Trump in 2016.

But as soon as his term ended in 1989, our society took up where it had left off in its rejection of Judeo-Christian values and proceeded in its downward spiral into the secular, pagan pit of Humanism.

President Trump was elected on a platform proclaiming that he would “Make America Great Again.” After his election, I said several times that we could not count on his doing so. I said that because I emphasized that no one could make our nation great again as long as we continued in our outright rebellion against God and His Word.

This ignorance is reflected in the latest polls conducted by the Barna Association which show that only 9% of Americans can be characterized as Bible-believing. And even more shocking, only 17% of professing Christians are truly Bible-believing.

Again, only 9% of Americans can answer these questions biblically, and only 17% of professing Christians can do so.

Is it any wonder that a recent national poll by the George Barna’s American Culture and Faith Institute revealed that: 77% of Americans believe divorce is acceptable; 71% believe sexual intercourse between unmarried adults is okay; 69% believe there is nothing wrong in having a baby outside of marriage; 58% believe viewing pornography is acceptable.

Or, consider what public opinion polls are showing regarding same-sex marriage. Acceptance of the abomination of same-sex “marriage” has increased rapidly from 37% in 2007 to 67% in 2018. The latest 2018 poll showed there is only one state left in the Union where a majority of people oppose same-sex marriage — Alabama!

My friends, we need to face up to the fact that we have lost the culture war. Humanism has triumphed. We are now a nation begging God to deliver us from judgment to destruction. 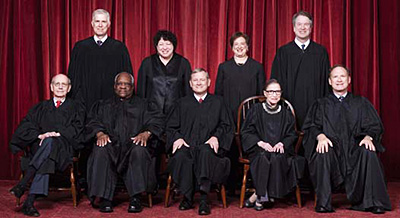 A radical President with a supporting Congress can undercut the Court by passing legislation to increase the number of members from 9 to 11 and to allow for additional appointments for each judge who stays on the court beyond the age of 70.

What most people forget, or don’t know, is that six times in American history, Congress has changed the size of the Supreme Court by either increasing or decreasing the number of justices — each time for political reasons.

Our Constitution does not specify the number of judges. The Court began with 6 judges. It was increased to 7 in 1807 and to 9 in 1837. It was further increased to 10 members in 1863 and then reduced to 7 in 1866 to prevent President Andrew Johnson from making any appointments. The current size of 9 was set in 1864.

Furthermore, as recent decisions of the Court are proving once again, you can never tell for sure how a justice will vote once he is appointed to the Court. The trend throughout modern history has been for conservative justices to become liberal, as is the current situation with Chief Justice John Roberts.

In the fourth and last part of this series determining what the Bible has to say about a future revival or revolution in America, we will be comforted by the hope the Bible provides.