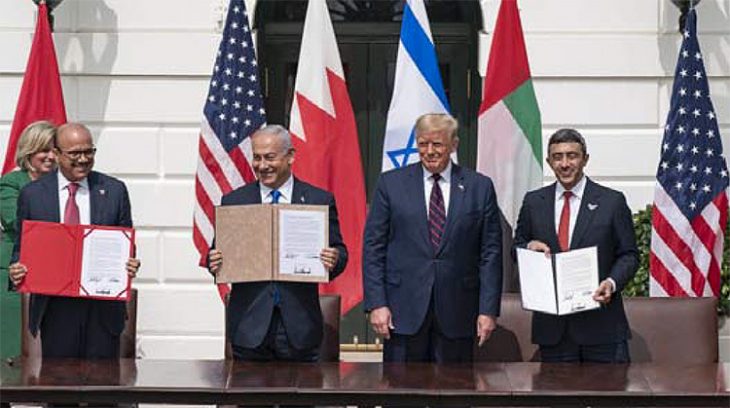 Amid all the chaos and unrest of 2020, a hopeful glimmer arose in the Middle East. The Trump Administration announced the Abraham Accords — a supposed new breakthrough in peace between Israel and two Persian Gulf states.

Ironically, the United Arab Emirates and Bahrain have never been at war with Israel in the first place. So what exactly did this accord mean? Will it lead to Middle East peace in our time, or is it just more shouting at the wind?

In order to answer that question, a little historic perspective and a lot of Biblical discernment are required. Since its founding in 1948, Israel has been surrounded by hostile Arab nations on every side. Many of them have declared the extermination of Israel to be their highest priority. That level of animosity led to four major wars — in 1948, 1956, 1967, and 1973. Time and time again, Israel has fought against a coalition of enemy nations with vastly superior numbers and resources. But in every war, Israel has emerged victorious.

God promised to preserve and protect the Jewish people once they were resettled in their ancient homeland. He said Israel would be “like a firepot among pieces of wood and a flaming torch among sheaves” (Zechariah 12:6), meaning that they would exhibit great military prowess above their enemies.

Those prophecies have proven true. The Israeli Defense Force (IDF) is respected by friend and foe alike. This superiority has forced Israel to direct an extraordinary portion of its national budget toward intelligence and defense.

Ever since oil became the lifeblood of the world economy, successive American administrations have been ensnarled in the political morass of the Middle East. Recognizing that a cold peace beats a hot war, various Presidents have attempted to facilitate peace between Israel and its neighbors — typically by pressuring Israel to make concessions.

Thus, Egypt entered into a peace accord in 1979 in exchange for a return of the Sinai Peninsula. Jordan signed an accord in 1994 when Israel guaranteed Jordanian oversight of Jerusalem’s Muslim holy sites. And in 2005 the US pressured Israel into turning Gaza over to Palestinian leaders controlled by Hamas.

The crux of all those peace negotiations and accords — the prize that every belligerent remains fixated upon — is the Land. Since Israel’s inception, Arab nations on every side have expressed outrage that a Jewish state exists right in their midst. To this day Palestinian leaders reject Israel and claim that there was never a Jewish presence in Palestine prior to 1948. Overriding all of that, the city of Jerusalem — cherished by Jew, Muslim, and Christian alike — has been the grandest prize of all.

Underlying all of the acrimony is a satanic hatred of the Jews. And this remains very much alive in the “Arab Street” (the mob of citizens that underlies the official Arab governments). When Bill Clinton pressured Ehud Barak in 2000 to offer Yassar Arafat everything he was demanding, Arafat rejected even “the offer he couldn’t refuse.” The reason was two-fold: first, he was consumed with hate and did not really want peace; and second, he had stoked hatred in Palestinian hearts to the point that he knew he would be destroyed if he made peace with the Jews.

I witnessed the irrational hatred that holds sway over this region firsthand in 2003. During the war with Iraq, I flew missions throughout the Arab world. At one stopover, I had the opportunity to engage with officers from an allied Arab air force. They asked my opinion of the 9/11 attacks in America, then immediately blamed Israel. Sadly, they consistently reinforced each other’s anti-Semitic paranoia and tried to outdo one another with bolder and bolder anti-Israel sentiments.

Golda Meier once said, “Peace will come when the Arabs will love their children more than they hate us.” Given this dynamic, it is no wonder that true Middle East peace has remained so elusive. And yet, it is the golden ring of American foreign policy. So it comes as no surprise that “deal-maker” Donald Trump waded into this diplomatic swamp.

With that background established, what are the Abraham Accords? In short, they “normalize” relations between the UAE and Bahrain and other signing nations with the state of Israel. That is diplomat-speak stating that they will now engage with one another economically and otherwise.

These two tiny nations are among the richest in the region. Fueled by petro-dollars, they have the highest standard of living and are arguably the most open to Western visitors and ideas. It was not a very heavy lift for them to want to benefit from Israel’s growing economic clout.

As these agreements were announced, the only question of land acknowledged publicly was an agreement by the Israeli Government to temporarily suspend the annexation of West Bank territory.

An Unbalanced Threat from the East

The greater impetus for this agreement is not so much the elephant in the room but the tiger on the other side of the Persian Gulf — namely, Iran. Since Iraq was defanged as both a threat and a regional counterbalance by America, Iran has emerged as the looming menace in the Middle East. The Ayatollahs and radicalized Muslims ruling Iran want to destabilize neighboring countries and solidify Arab hatred of Israel. Their motivation is an extremist worldview based on a Shiite interpretation of Islam.

Ironically, many observers note that Shiite and Sunni Muslims hate each other even more than they hate the Jews. So Sunni Arab nations are applying realpolitik to their diplomatic calculations. Applying an old Arab proverb (“The enemy of my enemy is my friend”), they see Israel as the best regional counterbalance to Iran’s growing power.

Iran understands this — as do other regional players. Under the Trump Administration, the US has welcomed this new Middle East détente and is grateful for a growing coalition of nations united against Iran.

Lurking in the background of this diplomatic breakthrough is a growing threat on Israel’s northern border with Syria. Turkish Prime Minister Erdogan has blended radical Islamist ideology with a cult of personality, turning his nation against Israel. And it has joined with Russia to establish a presence in Syria. 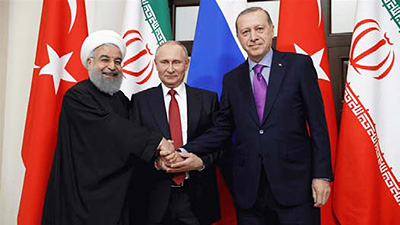 Presidents Hassan Rouhani of Iran, Vladimir Putin of Russia and Tayyip Erdogan of Turkey pose before their meeting in Ankara, Turkey on April 4, 2018. These leaders represent the nations that will be at the core of the Gog & Magog Alliance that will attack Israel in the end times. (www.universaltvsomali.net)

Students of Bible Prophecy recognize the significance of Russia allying with Turkey, Iran, Libya, and eventually Sudan. That axis power described in Ezekiel 38 will eventually launch the War of Gog and Magog and invade Israel for the purpose of seizing spoil and plunder (Ezekiel 38:10-12).

As Amir Tsarfati, an Israeli intelligence officer and Bible prophecy teacher said during a “Christ in Prophecy” TV interview, while there is not yet an “Aha” moment with regard to Bible Prophecy, all the pieces are falling in place for these end times wars to occur. The satanic hatred of some, and the political manipulations of others, will bring about circumstances that will ultimately fulfill God’s prophetic word.

How Peace Accords Can Endanger Peace

These supposed peace accords will create a shadow of darkness that will deepen and grow. Iran will become more fervent in stirring the pot with Hamas and Hezbollah. Coupled with Palestinian recognition that they are being abandoned by their former Arab benefactors, this will lead to desperate measures by Israel’s closest enemies. With Hamas, Hezbollah, the Palestinians, and terrorist groups like the Muslim Brotherhood fomenting hatred and swaying the official policy of the Psalm 83 nations, a prophetic war may soon come to pass:

…behold, Your enemies make an uproar, and those who hate You have exalted themselves. They make shrewd plans against Your people, and conspire together against Your treasured ones. They have said, “Come, and let us wipe them out as a nation, that the name of Israel be remembered no more.” (Psalm 83:2-4)

If that reads like a policy decree by Hamas, Hezbollah, or the gangsters who run the Palestinian Authority, it is because hatred already consumes their heart and motivates their actions. These “peace treaties” will only inflame them more. Emboldened by Iran, they will lash out in a war of extermination against Israel. The result will be another overwhelming victory for the Jewish nation — so much so that it will expand its territory and begin to believe itself secure from proximate threats. And that is where Ezekiel 38 comes into play.

Those with biblical discernment realize that true and lasting peace will not be achieved on the earth — in the Middle East or elsewhere — until the Prince of Peace reigns from Mount Zion in Jerusalem. Until then, real peace will remain elusive. The words of the prophet Jeremiah to ancient Jerusalem will still apply as politicians pronounce, “‘Peace, peace,’ but there is no peace” (Jeremiah 6:14).

A Concluding Thought for Peace Seekers

Likewise, as lawlessness mounts in the world, peace will remain elusive for every person who turns away from God. Apart from Him, you will never find peace.

But there is a way to be at peace — with God and on earth (Luke 2:14). Jesus offers this sure promise to all who put their trust in Him:

Come to Me, all who are weary and heavy-laden, and I will give you rest. Take my yoke upon you and learn from Me, for I am gentle and humble in heart, and you will find rest for your souls. (Matthew 11:28-29)