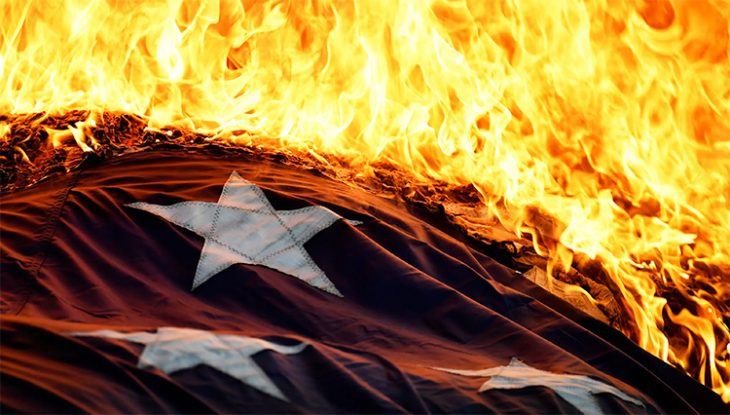 [Note: Nathan Jones serves as the Internet Evangelist with Lamb & Lion Ministries. Allen Parr is a Bible teacher and evangelist whose ministry is called Allen Parr Ministries and his YouTube channel is The BEAT.]

Nathan Jones: Allen, you contend that “Satan has a five-part plan to disrupt and destroy the United States of America.” Tell us about it, point by point.

Allen Parr: Our world is under attack! And, our country specifically. Living through 2020 has been a crazy year. There’s been a whole lot of changes and scary events going on right now. In spite of all of these things, I see the Enemy trying in very specific ways to attack our country. Here is his five-part plan, as I see it.

Allen Parr: The first way Satan has been attacking our nation is through the newest generation by causing great confusion over their sexual identity. It seems like now more than ever our youth are confused about their gender. Job applications even now offer choices for male, female, and other.

Nathan Jones: Gender is also being removed from birth certificates. I watched a video of Will Witt, who is with PragerU, where he was going to college campuses and asking students how many genders there are. Some responded with “infinite,” and some just made up numbers. And yet, the Bible declares there are only two genders.

Allen Parr: Exactly! The Enemy is doing a job on our youth to try to get them to be confused about how they identify sexually.

Nathan Jones: Genesis 1:27 says, “So God created man in His own image; in the image of God He created him; male and female He created them.” I’m pretty sure that verse doesn’t say “male, female, fluid,…” It says two — period!

Allen Parr: Exactly again. There’s this sexual identity confusion, but also a sexual preference confusion as well, which is huge. We see the LGBTQ+ agenda being pushed in every sitcom that we watch. It’s blatantly obvious in media that there’s some sort of homosexual agenda going on by including a same-sex couple or someone who is inclined to be same-sex attracted.

Allen Parr: Breaking down families isn’t something necessarily brand new, but now there are a lot of different organizations out there that are fighting for feminist rights and many other anti-family positions. Clearly, there is an attack on the family being waged. The divorce rate is higher, even among Christians. We have more people giving up on their marriages. The Enemy knows that we are stronger together than we are apart, so Satan has made a concerted effort to tear apart families.

Nathan Jones: It’s interesting that in Matthew 19:8 that Jesus reiterates what was written in Malachi 2:16, which reads, “For the Lord God of Israel says that He hates divorce, for it covers one’s garment with violence.” Satan really hates the nuclear family because the nuclear family provides the foundation for society.

Allen Parr: Absolutely, yes. As the family goes, so does society. The Enemy knows that truth, so he creates conflict and discord within the home for the purpose of causing families to break up.

We have to realize that divorce has a significant negative effect on children. I am the product, unfortunately, of a broken home. It contributed to me waiting to get married much later in life. I grew up without that family structure that many of my friends were blessed with growing up.

So, if Satan can split off the children away from the family then they’re far more vulnerable to temptation. That’s one of the main tactics in Satan’s strategy.

Nathan Jones: What is America up to now — 63 million abortions since Roe v. Wade? China has aborted 300 million babies. The death toll from abortion is shocking and tragic.

Allen Parr: Absolutely, and abortion is something God abhors. Let’s call abortion what it truly is — murder. The Bible in Exodus 20:13 commands, “thou shalt not murder,” which is the Sixth Commandment.

The Enemy has been trying to normalize murder through abortion. The same thing with the homosexual agenda, Satan has been working to minimize this sin as not being a big deal. He’ll cloak murder under the auspices of a women’s right to choose, or to have control of her own body, or that an unborn baby isn’t really life yet and so, therefore, abortion isn’t really murder. Satan works to place doubts in people’s minds to desensitize them to what is really happening, which when it comes to abortion is murder.

Allen Parr: A major thing that is happening right now in our society that the Enemy is using to attack our nation is in fomenting division. We as a nation are so divided right now. You cannot get on social media and have a discussion without arguing and strife.

Nathan Jones: I believe social media has been a main component in Satan’s work to sow discord and division in society.

Allen Parr: Often times I just want to delete all of my social media accounts, but I can’t, because my ministry is online. I see three different ways Satan is causing division: race, politics, and denominationalism.

Obviously, there has been a whole lot of racial tension in our country due to the police shootings and the subsequent riots. The Enemy has been using race to sow discord and cause division.

Politics, especially in an election year, are always divisive. There are people who claim they are a Christian and so you have to vote this way, or if you don’t vote this other way then you’re not a Christian. Each side of the political aisle acts as if their vote determines their eternal existence, creating great discord and division.

Denominations are well known for their arguments and fussing and fighting over various doctrines and other topics.

Nathan Jones: Christians don’t get along well with each other, do we? It’s a rather sad blight on the Church.

Allen Parr: Christians are all on the same team, and yet we’ve been letting denominationalism totally break us apart. Christians don’t even realize that we are being used as a tool of the Devil to create discord.

Allen Parr: The last component of Satan’s five-part plan to destroy the USA involves emotional disorders. I used to teach high school and saw that we are living in a time where many kids have low self-esteem, depression, and anxiety. Children are being put on medication to deal with these conditions. And yet, the Bible says in John 10:10 that, “The thief does not come except to steal, and to kill, and to destroy. I have come that they may have life and that they may have it more abundantly.”

And so, these five are the key tactics used in Satan’s strategy to really wreak havoc in our country today.

Nathan Jones: Thank you, Allen. Now that we know what Satan’s plan is, we can counter it as Christians by continuing to be salt and light in this world. We stand for righteousness in an increasingly dark time period. And, as we wait for the return of Jesus Christ, we must continue to share the Gospel, all the way up to the very day of His glorious return.