Why I Preach Bible Prophecy 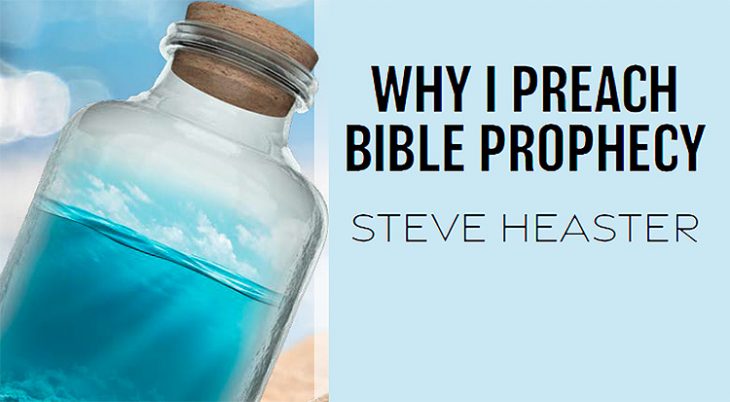 [Note: Our guest contributor, Steve Heaster, has served as the pastor of Immanuel Bible Church in Three Springs, PA, since 1985. He is an ardent student and teacher of Bible prophecy.]

I recall reading a story one time of an old Indian making his first sojourn from the Rocky Mountains to the Pacific Ocean. He was in such awe of its expanse and splendor that he filled a quart jar and said he would take it back to show his people the Pacific Ocean.

Attempting to write about why I preach prophecy makes me feel like that Indian. Prophecy, and the reasons for believers to study it, are endless. One hardly knows where to start on such a vast subject.

It is a sad commentary on the Church today that so few pastors and Bible teachers devote time to a subject that makes up almost one-third of the Holy Scriptures. Maybe some are overwhelmed by the subject. Others have become jaded by those who have abused prophecy by setting dates and times when Scripture clearly tells us that no man knows those things. No doubt some are made uncomfortable by the subject because they fear it.

Whatever the reasons, one thing is certain, we are called to preach the “full counsel of God,” and that clearly includes teaching the prophetic Scriptures. Here are just a few of the many reasons I preach Bible prophecy.

One reason to preach Bible prophecy is found in Revelation 19:10 which reads: “Then I fell at his feet to worship him. But he said to me, ‘Do not do that; I am a fellow servant of yours and your brothers and sisters who hold the testimony of Jesus; worship God! For the testimony of Jesus is the spirit of prophecy.'” Clearly, the design of prophecy is to bear witness to Jesus Christ.

The fulfillment of prophecy is the final validation that the Word of God is sure, and that it is THE WORD OF GOD! No other book can make this claim and stand. When one comes to the spiritual understanding that the Bible is not a history book, but is rather His-Story, which is the story of the living God and His Christ, one may then fully understand the importance of prophecy.

Another reason for preaching Bible prophecy is because it brings spiritual understanding to the times in which we live. We live in tumultuous times. People are searching for answers to the trials of the day. For the most part, humanity is trying to understand our times with reason and logic. The great difficulty with that approach is, much of what we witness has no discernable reason and little if any logic most of the time.

As an illustration, consider the latest views on gender. In 2 Thessalonians 2:11, the Apostle Paul writes of a future time when, “For this reason God will send upon them a deluding influence so that they will believe what is false…” Today we have people of science acknowledging that there are multiple genders. Suddenly, we now have supposedly intelligent individuals affirming this lie. So, how do we understand this? The only thing that can possibly explain this comes from Paul’s prophecy of a coming spirit of strong delusion.

Bible prophecy gives a spiritual insight into our times, be it politically, economically, culturally, and above all, spiritually. Truly, Bible prophecy shines God’s light onto the world’s spiritual darkness.

Bible prophecy spurs the Church to urgently fulfill its mission to reach as many people as we can with the Gospel of Jesus Christ. The Bible prophesies that as end-time events unfold, and as we discern those events coming to pass, we should be motivated to redeem the time.

I often hear people use the phrase, “if the Lord tarries,” as though we may have all the time in the world. Permit me to share a Biblical truth with you. Hebrews 10:37 reveals, “For yet in a very little while, He who is coming will come, and will not delay.” This verse clearly teaches that when God has saved all of humanity that is to be saved, nothing will delay the Lord’s return. The Lord’s return is always imminent, and sharing the Bible’s prophetic warnings should be a priority of the Church.

Provides a Sense of Peace

Finally, I preach Bible prophecy because it brings a peace that transcends the trials and tribulations of this earth. It also removes the fear of the unknown. At least 27 times in the New Testament, we are instructed to “fear not.” God desires that we know in general terms what lies ahead. As Amos 3:7-8 says: “Certainly the Lord God does nothing unless He reveals His secret plan to His servants the prophets. A lion has roared! Who will not fear? The Lord God has spoken! Who can do anything but prophesy?”

Bible prophecy and its frequent fulfillment teaches that the world is not spinning wildly out of control. Rather, the Living God’s plan is unfolding precisely as He ordained it to do. As Isaiah 44:6-8 declares:

“This is what the Lord says, He who is the King of Israel and his Redeemer, the Lord of armies:
‘I am the first and I am the last,
And there is no God besides Me.
Who is like Me? Let him proclaim and declare it;
And, let him confront Me
Beginning with My establishing of the ancient nation.
Then let them declare to them the things that are coming
And the events that are going to take place.
Do not tremble and do not be afraid;
Have I not long since announced it to you and declared it?
And you are My witnesses.
Is there any God besides Me,
Or is there any other Rock?
I know of none.'”

In the end, while these are only a few reasons to preach Bible prophecy, they are clear reasons taken straight out of the Scriptures. Now, even more than before, I feel very much like that Indian.

The Word of God is so expansive that communicating its depth and breadth is like capturing the Pacific in a jar. But as pastors, we are called to preach the full counsel of God. Anything less is to disobey the Lord we serve.

Israel as Proof of God’s...

The Existence of God: The Straw Man...

God Changed My Life – A Testimony