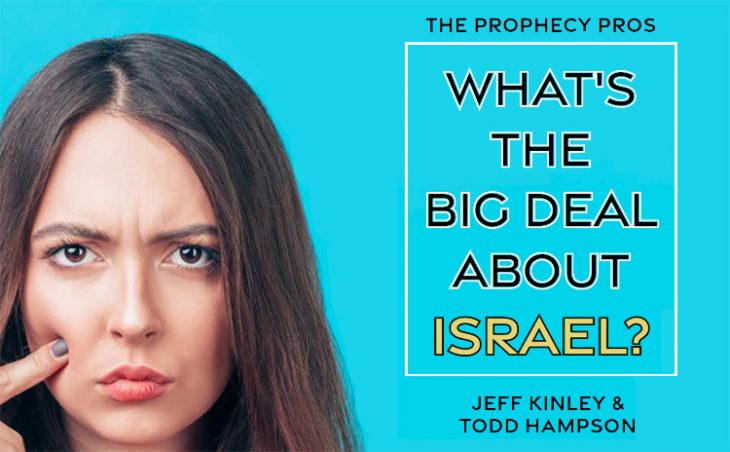 [Note: Our guest authors, the Prophecy Pros Jeff Kinley and Todd Hampson, will be the featured speakers at Lamb & Lion Ministries’ annual Bible Conference on July 22-23. The following is an excerpt from a Prophecy Pros Podcast by Jeff and Todd that first aired as Episode 7 of Season 1.]

Todd: Why is the world so enthralled and captivated by this one tiny country that can literally fit into Lake Michigan with room to spare?

I remember as a kid, even before I was a Christian, seeing so much Middle East drama ramping up and I always wondered why. Even today, it’s just ramped up even more to where literally the entire world’s focus is on Israel and the Middle East. What we don’t realize without studying scripture is that it’s actually biblical. It started with the Abrahamic promise, when God literally gave an unconditional promise to Abraham. That’s found in Genesis 12:2-3: “I will make you into a great nation, I will bless you. I will make your name great and I will be a blessing. I will bless those who bless you and whoever curses you, I will curse. All peoples on earth will be blessed through you.”

So there’s multiple prophecy details in that verse that we could talk about, even leading to Jesus. He came and blessed the whole world. But this is an unconditional promise that God made to Abraham and his descendants that is not replaced by the church. I think it all stems back to that, Satan hates what God loves, and here God set the standard and the framework for everything that was moving forward from this point.

Jeff: Absolutely. People ask, well, why is Israel such a focus? Why do they seem to be at the hub of all the conflict and all the controversy? It’s because of Satan and his hatred for the Jewish people. I mean, antisemitism is on the rise today. It’s really growing rapidly in Europe and we see it even in some places in America as well. But it really goes back, this ancient hatred goes back to Genesis, where God himself made a covenant with a people.

So Satan hates the Jews for a variety of reasons, but I think some people probably think, “Yeah, okay, so there’s the Old Testament, but that’s so old school.”

Todd: Yeah, what we call the Old Testament just sounds so antiquated and out of date. It’s kind of like an old dictionary from 1900. Who uses those things, right? Shouldn’t we just love God and love our neighbors and not worry about the Old Testament?

In 70 AD the Romans destroyed Jerusalem and dispersed the Jewish people. From that time forward the history of the Jewish people is buried, it’s dramatic, it’s romantic, it’s violent. But God’s covenant with them has still not changed, because these were unconditional promises.

Todd: Even more modern times, where are the Nazis? I mean, they’re gone.

Jeff: Right. There’s a pattern with those who treat the descendants of Abraham a certain way. It’s like I told my boys when they were young, how you treat your mother will determine your happiness.

Jeff: Yeah. God basically says, “Hey, how you treat my people of Israel will determine how I treat you as Gentile nations.”

Todd: But what about the claim that the church replaced Israel?

Jeff: Well, we need to keep a couple of things in mind. First of all, those promises that God made to the Jewish people were specifically to them as a nation. In John 1, Jesus said that He came to His own and His own didn’t receive Him. I think that’s one of the saddest verses in the whole Bible, because Christ did come to the Jews first, presented Himself as the Messiah. They rejected Him at the time, because they were looking for a conquering King and He came as a suffering servant to die for their sins. So they rejected that and then God turned to the Gentiles.

But in Romans 11, Paul said, “For I do not want you brother to be uninformed of this mystery.” He’s talking about a prophetic mystery and saying don’t be ignorant, don’t be uninformed about it. He said that a partial hardening has happened to Israel until the fullness of the Gentiles has come in.”

But the age or the time of the Gentiles — the church age — is going to come to an end and God’s going to say, “Okay, now it’s time to turn my attention back to the Jewish people.” That’s where the tribulation period will begin that’s very Israel-centered. In fact, the very next verse says, “And thus all Israel will be saved.”

Todd: So at some point, all Israel will turn to Christ and see Him for who He was.

Jeff: Absolutely. There’s going to be this remnant at the end of the tribulation, and God’s going to turn them back to Him.

But until then they will be rejected by the unbelieving world. Over and over again in history people have thought, “Well, Israel for sure is done now, right?”

Todd: Honestly, I think this is where some believers get a little tripped up. In 70 AD, Jerusalem was destroyed, Jews were scattered everywhere, there was no more Israel. End of story. Focus shifts to the Gentiles in the New Testament. But what they failed to realize is no, God was still at work, actually fulfilling ancient prophecies. For example, Deuteronomy 28:64 says, “The Lord will scatter you among the peoples from one end of earth to the other.”

I won’t go through all the prophecies. But Isaiah 11:11 says, “In that day,” talking about the end times, “In that day, the Lord will reach out His hand a second time to bring back the remnant of His people.” Notice he says there’ll be two dispersions. So God was at work during that second, worldwide dispersion. Just like scripture foretold, everywhere they went, they were persecuted, they were mistreated. Yet somehow they kept their identity. That’s never happened with any other people group.

We could also talk about God’s preservation of the Land — and its complete rejuvenation when the Jewish people began to come back in the 19th and 20th centuries.

Jeff: What that doesn’t mean, is that we agree with everything that the nation of Israel does.

Todd: Or that they’re perfect and deserving of blessing.

Jeff: They’re an unredeemed nation right now, but yet God is still guiding them specifically and generally towards an appointed end. It just means that we’re supportive, we’re an ally, we’re a fan of Israel, that type of thing.

It also doesn’t mean that if you’re born Jewish that you’re automatically saved. It doesn’t mean that at all. Each individual has to make a decision to follow Jesus Christ. You and I both know many Jewish believers who have become Christians. Whether they call themselves completed Jews or messianic Jews or whatever, they are brothers and sisters in Christ and a part of the church.

Jeff: But in the end, God’s got unfinished business with the Jews and the nation of Israel. If we’re going to be on the right side of history, we have to honor God’s promise to Abraham, to “bless those who bless you, [Israel].”

Todd: I want to be blessed, man.

I think Christians, in particular at this time, need to forget about politics, forget about right versus left and all the stuff that’s in our face, and look biblically at the issues and follow God’s plan. That’s where we need to focus. Regarding the Jews and Israel, always keep in mind the underlying biblical plan and framework that God has set up.”

Jeff: I’m reminded of a quote by a Benjamin Disraeli who was a 19th century British statesman. He was asked one time if he knew of any infallible proof of God’s existence. He thought for a moment and then with confidence responded, “The Jew, sir, the Jew.”

Jeff: I think the fact that there are still Jews that are alive today, that they’re living in the nation of Israel is clear evidence of the fact that the Word of God is authenticated, it’s true, it can be trusted. That, yes, there is a God who does write history. So the existence of Israel is this miracle, it’s the sign of the end times and that’s why we believe that we’re living in that time.