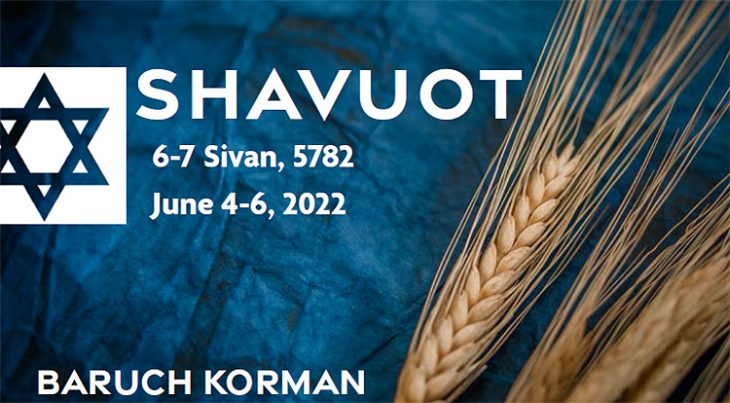 [Note: Our guest writer, Baruch Korman R. Baruch, is the senior lecturer at the Zera Avraham Institute based in Israel and holds a PhD in Jewish Studies. He also appears on the Israeli Television program “Pdut L’amo” where he teaches each week from the Bible (in Hebrew). Many of Baruch’s lectures are available at LoveIsrael.org (English). Baruch and his family reside in Israel.]

Although the Festival of Weeks (Shavuot — 6-7 Sivan, 5782 | June 4-6, 2022) is mentioned in the Torah as one of the L-rd’s appointed times, it is in the Book of Acts where one learns the connection between this Biblical holiday and the Holy Spirit. It is very significant that G-d chose first to pour out the Holy Spirit on believers on Shavuot. In fact, Yeshua (Jesus) had commanded His disciples to “remain in Jerusalem for the promise of My Father.” The Holy Spirit is clearly related to a promise from G-d for the disciples of Yeshua. Also, in the Book of Acts one reads:

But you will receive power, the Holy Spirit having come upon you, and you will be My witnesses in both Jerusalem, and in all Judah, and in Samaria, and unto the ends of the earth. (Acts 1:8)

G-d is faithful to every one of His promises and He provides power to the followers of Yeshua in order that each believer can bear witness to the Person and Work of Messiah Yeshua. One needs to remember that according to Judaism and based upon Biblical testimony, there is a relationship between the Festival of Weeks and the Ten Commandments. All would agree that the Ten Commandments are foundational to being in a covenant relationship with G-d and therefore, as believers in Yeshua, bearing witness of Yeshua should be foundational to us.

There are of course many different aspects to the work of the Holy Spirit in a believer’s life, but the primary one empowers disciples of Yeshua to testify in both word and deed concerning the truth of Yeshua’s identity and His work. Not only does the Holy Spirit anoint our words, but He provides power which enables the believer to behave in a manner that demonstrates Yeshua’s presence in his or her life. It is this anointed behavior which produces good deeds and wondrous signs which serve to confirm the reality of who Yeshua is, what He has done, and what He is returning to do.

Today, it is unfortunate that there are an increasing number of people who will say they believe that Yeshua is the son of G-d and is divine, but when examining their words, they do not believe that it is proper to worship Him. For them, the term “son of G-d” is not referring to Yeshua being the second member of the Trinity, but only expresses a close relationship to G-d, much like other servants of G-d mentioned in the Bible. Similarly, their use of the term “divine” does not express Yeshua being G-d, but only a degree of holiness which once again, other people and articles can contain. They will, for example, state the Bible is a divine book, but obviously they are not saying that the book is G-d. One needs to be very cautious, as frequently these false believers try to conceal the fact that they do not accept that Yeshua is G-d.

An anointed witness of Yeshua should not only focus on His true identity, but also on what He did the first time He descended from the Heavens, namely the work of redemption He did through His death on the Cross. In the same way that people are not proclaiming that Yeshua is G-d, there is a failure to properly testify of why He went to the Cross. It is an absolute requirement to be saved, that one confesses his sinfulness and acknowledge Yeshua’s death on the Cross as the redeeming payment for all sin. The Cross reveals G-d’s judgment of sin and is the only means whereby one can experience redemption. Redemption must involve blood and it involves a payment which brings about a change of ownership. Through the work of Yeshua, i.e. His death on the Cross on Passover, no longer does an individual belong to sin, but he or she is delivered from the rule of sin and now belongs to G-d.

Obviously, as we are still living in this human body, believers will struggle with obedience to these standards. But, failure to acknowledge them as G-d’s will for one’s life, reveals an improper comprehension of the Gospel which does not save. This is an important element of the true faith and perhaps an example will assist.

The Bible clearly states standards of purity. Such standards frequently relate to activity between individuals. Sexual intimacy is only acceptable to G-d within a Scripturally-based marital covenant. Same gender marriage is clearly not allowed, according to the testimony of the Word of G-d. People will ask, “Do all homosexuals go to hell?” People who will be in hell will be there only because they did not accept the Gospel. Everyone who will be in heaven is a sinner, saved by the grace of G-d, which was achieved by Yeshua’s death on the Cross. Homosexuality, like adultery and all other sins, will not keep people out of heaven; rather it is the rejection of the Gospel that keeps people from Heaven.

However, to accept the Gospel and experience G-d’s free gift of forgiveness of one’s sins, a person must desire to turn away sin. In other words, a person whether a homosexual or an adulterer, must acknowledge that such behavior is sin and desire to live according to the will and standards of G-d. One’s performance of G-d’s will does not save or maintain one’s salvation! It is by faith in the grace of G-d that one is redeemed, and not by works.

If a person states they want Yeshua to be their Savior but have no intention of leaving sin, whether it be homosexuality, adultery, or for that matter any sin; then that person is not a candidate for salvation. If a person were to say, “I acknowledge my sin and I accept the standards of G-d, but I struggle with this area of my life,” no matter what the particular sin is, this person is indeed a candidate for salvation. In fact, it is only by means of the indwelling Holy Spirit within a believer that one has access to the power of G-d to turn away from sin.

Unfortunately, many today do not bear witness to the Biblical Gospel. The Scriptural standards of G-d are frequently ignored or compromised. The times are changing as we approach the end times. It is for this reason true believers must walk in the anointing of the Holy Spirit and in the power only He can provide us to be G-d’s witnesses here in Israel and throughout the rest of the world.

(Out of respect for Baruch’s Jewish practice of spelling the Almighty’s Name as “G-d” and referring to Him as “L-rd,” we have maintained his choice of format in this article.)