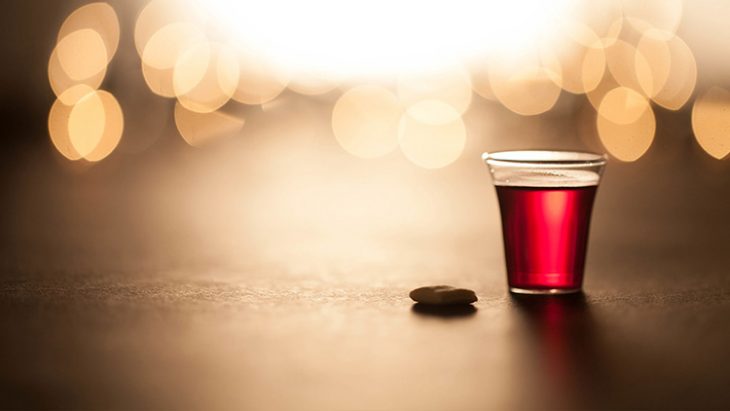 There may be no clearer example of the Gospel focus of Christianity’s reflective “remembrances” and prophetic “anticipations” than the Lord’s supper.

Communion as it is commonly referred to in most denominations offers a unifying moment of Christian clarity. Whether weekly or periodically, followers of Jesus pause to remember His sacrifice on the cross at Calvary. The very words of Paul that instruct our observance of this holy sacrament convey the reverent meaning. Paul’s own description of the Lord’s Supper to the church at Corinth says it all:

For I received from the Lord that which I also delivered to you, that the Lord Jesus in the night in which He was betrayed took bread; and when He had given thanks, He broke it and said, “This is My body, which is for you; do this in remembrance of Me.” In the same way He took the cup also after supper, saying, “This cup is the new covenant in My blood; do this, as often as you drink it, in remembrance of Me.” – 1 Corinthians 11:23-25

The significance of those emblems never wanes. There is a range of practices regarding the frequency and manner in which communion is shared. I will observe that while some are dismissive of the necessity of sharing in communion on a weekly basis as an aspect of Christian worship, I’ve found most churches that offer weekly communion do so in a much more reverent and meaningful manner than those who engage only sporadically. Regardless of the frequency, Paul’s admonition is one that he received from God: that we share communion with other brothers and sisters in Christ as often as we do in remembrance of Him.

A Picture of The Gospel

The Gospel-centeredness of the Lord’s Supper is obvious. The elements point back dramatically to Jesus’ great sacrifice. His death on the Cross was the propitiation — the payment in full — for our sins. In the words of the great Keith and Kristyn Getty song, “on the Cross as Jesus died, the wrath of God was satisfied.” Jesus act of atonement allows us to be reconciled with God — to quite literally be “at one” with Him.

The Apostles could not have conceived of a Gospel that did not center on the death of Jesus. They would recognize the so-called “prosperity gospel” that proclaims health, wealth, and material blessings in this life but minimizes the shameful death of the Savior as what it is: a false gospel.

That is why Paul would purpose to preach nothing but Christ crucified. The great paradox of the Christian faith is that His death — the most ignoble and dastardly episode in human history — provides the path to salvation. By His stripes we are healed…

Sadly, many people stop reading at 1 Corinthians 11:25 — or at least fail to cast their gaze forward in anticipation. That is because Paul also stresses the purpose and foreshadows the extent of the sacrament known as communion. He wrote:

For as often as you eat this bread and drink the cup, you proclaim the Lord’s death until He comes. – 1 Corinthians 11:26

The first part of that statement is clear enough. By partaking of the Lord’s Supper we proclaim His death. At the Passover meal we remember as the “Last Supper,” Jesus blessed the unleavened bread and broke it, saying, “This is My body which is given for you; do this in remembrance of Me.” Then, after they had eaten, He took the cup and said, “This cup which is poured out for you is the new covenant in My blood” (Luke 22:19-20). Mark records that the cup would be “poured out for many” (Mark 14:24), while Matthew elaborates that it was “poured out for many for forgiveness of sins” (Matthew 26:28).

These passages make clear that communion is a Christ-centered celebration of a meal first ordained by God for the Jewish people to remember His angel of death passing over their homes and their firstborn children. In that sense communion drives our thoughts even further back than Calvary to another instance of God’s grace toward His people. But Paul emphasizes that this commemoration is not only backward-looking; it should also propel our thoughts forward in anticipation of the Lord’s coming.

Jesus also meant for His disciples to cast their gaze forward. When He shared that last Passover meal with them, His death on the cross still lay in the future. Even as He tied the significance of the bread and the wine to His body and blood, He said, “I shall never again eat it until it is fulfilled in the kingdom of God” (Luke 22:16) and “I will not drink of the fruit of the vine from now on until that day when I drink it new with you in My Father’s kingdom” (Matthew 26:29).

Following His resurrection, Jesus ate fish with His apostles (Luke 24:41-43). It is reasonable to assume that He drank water when He shared a meal with them at the Sea of Galilee (John 21:9-14). But the special meal He re-purposed to commemorate His own crucifixion points to a prophetic closure that awaits final fulfillment.

Luke says that after Jesus ate with His disciples before His ascension, “He opened their minds to understand the Scriptures” (specifically “all things which are written about [Him] in the Law of Moses and the Prophets and the Psalms”) (Luke 24:44-45).

So there is much to look forward to in the Kingdom of God. I can’t wait to dine with Him at the great marriage supper of the Lamb (Revelation 19:9). Until then, when I revel in His presence and worship Him face to face, I will proclaim Jesus’ death — the Good News that offers salvation.

Cat’s in the Cradle