Eye to Eye: Biden and Lapid at the U.N. and Hurricane 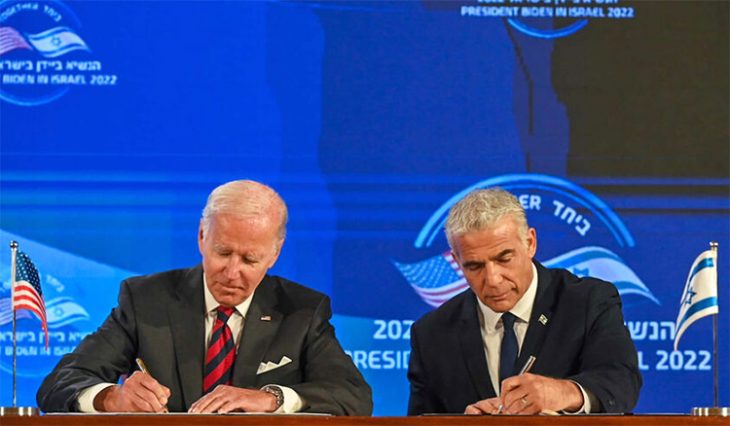 [Note: Our guest contributor, Bill Koenig, was a former White House Correspondent of 20 years. He has documented the close proximity of multiple natural disasters over the years to calls by various national leaders for the Promised Land to be divided between the Jews and the Palestinians. Bill’s following article highlighted the storms that struck the United States following the statements by President Joe Biden and foreshadowed the political storm that erupted when former Israeli Prime Minister Yair Lapid indicated his support for Palestinian statehood. With hindsight, we now know that Mr. Lapid was blown out of office by outraged Israelis who turned back to Bibi Netanyahu to steer their state through these turbulent times.]

Biden and Lapid at the U.N.

There had been no major hurricanes or tropical storms during the Atlantic season just short of three weeks into September 2022. It had been one of the calmest hurricane/tropical storm seasons on record. Then, things changed quickly.

U.S. President Joe Biden and Israeli Prime Minister Yair Lapid headed to the U.N. General Assembly on September 21st and 22nd respectively, and both stated their full support of two states — an Israeli and a Palestinian state. The political right wing in Israel was outraged.

Then, Hurricane Fiona hit Puerto Rico and left one million without power. You might recall that in 2017 during the month of Elul, there were three record-setting hurricanes: Harvey (when Jared Kushner was having private meetings throughout the Middle East on God’s covenant land), Irma (as the Trump Administration was preparing for talks with Middle East leaders on the land of Israel at the U.N.), and the Category 5 Hurricane Maria that sat on Puerto Rico on September 20, 2017, when President Trump had three separate meetings with King Abdullah of Jordan, Egyptian President El-Sisi, and PA leader Mahmoud Abbas at the United Nations.

Not to be outdone, Prime Minister Justin Trudeau also tweeted his support of the two-state plan just as hurricane warnings were being issued for parts of the Atlantic Canada coast, and forecasters with the country’s hurricane center warned that Fiona has the chance to be a “potential landmark weather event” for the country.

As Hurricane Fiona was moving north-northwest in the Atlantic, another tropical depression developed in the Caribbean.

President Joe Biden stated: “We will continue to advocate for lasting negotiated peace between the Jewish and democratic state of Israel and the Palestinian people… A negotiated two-state solution remains in our view the best way to ensure Israel’s security and prosperity… and give the Palestinians a state to which they are entitled.”

Referencing former Prime Minister Lapid’s statement at the U.N. General Assembly that Israel should secure “an agreement with the Palestinians, based on two states for two peoples,” Biden later posted on Twitter, “I could not agree more.”

Canadian Prime Minister Justin Trudeau, who famously crushed his own trucking industry when it objected to his extreme pandemic mandates, posted, “A two-state solution — with Israelis and Palestinians living in peace, security, and dignity — is in everyone’s best interest.”

All these comments came during the lead-up to another national election in Israel — the fifth in four years. While happy talk of peace and security flowed at the UN, Israelis expressed their outrage at the ballot box. Alex Traiman, CEO and Jerusalem Bureau Chief of Jewish News Syndicate, said, “by officially calling for ‘an agreement with the Palestinians, based on two states for two peoples,’ Prime Minister Yair Lapid has changed the election paradigm from ‘anybody but Netanyahu’ back to the issue that has divided Israel’s left and right since Yitzhak Rabin signed the infamous Oslo Accords in 1993.”

Doubling Down on Dishonest Diplomacy

The United States’ position on the Middle East continues to trek toward appeasing those who seek to destroy Israel, whether Iran and its nuclear-obsessed ayatollah or the terror-soaked Palestinian Authority.

In mid-September, United States Assistant Secretary of State for Near Eastern Affairs Barbara Leaf reaffirmed President Joe Biden’s support for the two-state solution despite rising Palestinian violence in Judea and Samaria. Speaking at a press conference regarding her recent trip to the Middle East and North Africa, Leaf stressed the administration’s commitment to the creation of a Palestinian state side-by-side with Israel “so that Israelis and Palestinians can live safely and securely and enjoy equal measures of freedom, security, and prosperity.”

The steady increase in Palestinian unrest and terrorism directed at Israel demonstrates that oily words aside, there is little peace or security being offered in exchange for Israeli engagement.

Storms — both natural and political — are brewing. And the God who controls the weather is not pleased when nations and leaders provoke Him with their disregard for His Word and antagonism toward His chosen people.

Do we have eyes to see and ears to hear?