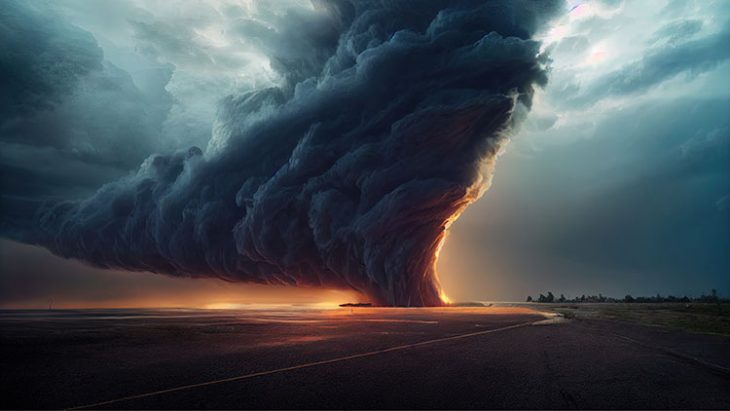 The unanimous declaration of the thirteen united states of America, when in the course of human events, it becomes necessary for one people to dissolve the political bands which have connected them with another, and to assume among the powers of the earth, the separate and equal station to which the laws of nature and of nature’s god entitle them…

We hold these truths to be self-evident, that all men are created equal, that they are endowed by their creator with certain unalienable rights, that among these are life, liberty and the pursuit of happiness.

Those words once described a western respect for, and understanding of, the entire natural order. Nature exists — and we move about in a created order — but above all we see and observe is God.

He cannot be seen. No instrument can measure Him or comprehend His proportions. No mortal mind or artificial intelligence can comprehend His ways or fathom His thoughts.

By the power of His Word — spoken as revealed in Genesis 1 — the cosmos began. The observable universe, more expansive than the mind of man can grasp, is thought to be only a small fraction of what actually exists beyond the confines of our own corner of space.

It is fitting and healthy for us to consider for a moment the immensity of God’s creation before we turn our gaze back upon His highest creature.

The narrative in John follows immediately on the heels of Jesus feeding thousands of people by multiplying five barley loaves and two fish. Matthew records this audacious demand after multiple miracles of healing and yet another miracle of feeding. Jesus was clearly exasperated that the supposed religious leaders could discern signs of weather and yet could not discern the signs of the times (Matthew 16:1-4).

Their refusal to acknowledge the multitude of signs Jesus performed reflected hardness of heart instead of inability to see. Rightly did Jesus assert in a parable that the hard of heart will not be “persuaded even if someone rises from the dead” (Luke 16:31). Jesus’ point was driven home dramatically in John 11 and 12. After He raised Lazarus from the dead, the Pharisees finally admitted that He was performing “many signs” (John 11:47). The Sadducees, who did not believe in resurrection in the first place, must have been truly perplexed (Acts 23:8).

But instead of acknowledging in their heart the clear authority of Jesus to work wonders and provide signs, the chief priests instead resolved to kill Jesus and Lazarus as well (John 11:43, 12:9-11).

What is the value of a sign that will not be seen or believed? Willful disbelief in the signs and wonders of God demonstrates a rejection of Him as God (Romans 1:18-20).

God has provided His Word as an infallible testimony to His Person, His power, and His plan. We need only believe Him, and like Abraham, we will be credited with righteousness. In other words, the full counsel of His Word points to Jesus (His Person), His resurrection (His power), and His Gospel (His plan).

He also extends grace and lovingkindness toward the creatures created in His own image. Because He is patient and gentle and does not “wish for any to perish but for all to come to repentance” (2 Peter 3:9), He also provides signs that point to His Person, His power, and His plan. Lamb & Lion Ministries has long categorized the signs of the End Times into signs of nature, society, spirituality, world politics, technology, and Israel.

God has frequently utilized signs of nature to confirm His calling and His will, to warn, and to judge individuals and nations. For example:

As Ruler of Heaven and Earth, God can also raise up talking donkeys, great fish, and lowly worms to serve His purpose.

I love the detail included in the Word of God. When describing the last plague in Egypt that would lead to Pharaoh letting the sons of Israel go, the Lord said, “there shall be a great cry in all the land of Egypt, such as there has never been before and such as shall never be again. But against any of the sons of Israel a dog will not even bark, whether against man or beast, that you may understand how the LORD makes a distinction between Egypt and Israel” (Exodus 11:6-7). This passage demonstrates that sometimes God’s sovereignty over nature is manifest by His suppression of outcomes that would be entirely natural!

Taken as a whole, some of these signs might have naturalistic explanations. The world still experiences pestilence and locust infestations, hurricanes and tornados, earthquakes and tsunamis, and droughts and fires. These and other natural disasters are inherent to the post-Fall curse placed upon the world. But often, they result from a specific judgment of God.

When King David sinned against God by commanding a census to ascertain the strength of his army, the LORD sent Gad to call him out. Gad relayed a heartbreaking message: David could choose one of three punishments for his faithlessness — a seven-year famine, a three-month onslaught by a foreign enemy, or a three-day outbreak of pestilence (or disease). David was in “great distress” over such a choice and yielded to the mercy of God. But he never doubted that God had the power and the right to inflict any of those judgments upon him and upon Israel (2 Samuel 24:1-14).

David’s realization is at the heart of any understanding of the signs of nature. Nature is not an autonomous mechanism; in the words of Thomas Jefferson, it is subject to Nature’s God.

Again, sometimes God works through natural processes to fulfill His will. But often, even those natural processes demonstrate a miracle of timing — and convey the almighty power of God. For instance, fishermen made a living on the Sea of Galilee. But Peter realized the divine providence of God when Jesus told him to cast his net once more on the right side of the boat (John 21:3-11).

Similarly, while Paul and Silas were praying and singing hymns at the midnight hour during their incarceration in Philippi, an earthquake shook the jail. All the prison doors were thrown open, and the chains were unfastened. A scoffer could dismiss that miraculous event as merely coincidental. But there are no coincidences with God — only miracles of timing.

In the second part of this two-part article, we will look at the signs of the Messiah.

Rise of the 10 Kings