The Biggest Threat To The U.S.A.

Today many fear for the future of the United States of America, and rightly so. It appears America is being accosted on many levels.

In response to this well founded concern, the question of what threat would hold the most danger to the United States of America was put to the reader in May 2009’s poll titled “Which is the biggest threat to the future of the U.S.A.?” The 986 respondents cast their vote from among a number of modern scenarios. The results shed a lot of light on where our readership believes the biggest dangers are to the welfare of the nation in this day and age. The results are as follows: 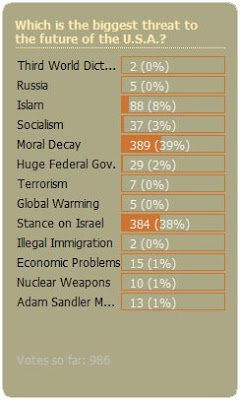 Global Warming — Not just a threat to the United States, what nation can possibly be safe when the planet itself has seemed to turn up the threat factor by turning up the temperature? Greenhouse gasses from cars, factories and belching cows are supposedly baking the ionosphere, melting the polar ice caps in an attempt to flood Berkeley and the Bronx, and making summer suntans so difficult by pushing up the SPF level on the sunblock. “The Earth is out to get us with Global Warming!,” so warns Al Gore.

It would appear only 5 (0.5%) of the 986 respondents believe Global Warming is the biggest threat to the future of the United States. They are not convinced by the December 2008 U.N. Intergovernmental Panel on Climate Change conference held in Poznan, Poland, where 650 Nobel prize and award winning scientists called Global Warming “a lie, a hoax and part of a new religion” (see Cooling Global Warming ).

Third World Dictators — Will Venezuelan President Hugo Chavez cut off 25% of America’s flow of oil? Will North Korea’s Kim Jong-il blow his stack and attack. Will Castro ever die (he’s like, what, 125 years old now)? Of the 986 respondents, 2 (0.2%) believe one of these third world nut jobs will clip the wings of the American eagle.

Russia — One day Russian presidents are banging their shoes on the table, the next they’ve bellied up to the BBQ pit and are looking deep into our eyes. Are the Russians friends of the United States, or are they not? Of the 986 respondents, 5 (0.5%) believe the former superpower is on the rise and as Gog will reveal itself to be that two-faced friend who made Caesar utter “Et tu, Brute?”

Nuclear Weapons — While President Obama is looking to reduce American and Russian nuclear weapons by a third so that they only have the means of blowing up the planet 30 times (each), madmen like Iranian President Mahmoud Ahmadinejad all the way down to the island nation of Pokoponesia are looking to grab up some of that nuclear arsenal (peace be unto them). With most of the first world nations possessing a stockpile only SkyNet would be envious of, and small nations getting atomic bombs at wholesale, the possibility that one of the more unstable lot will eventually ignite World War 3 is a very real concern. Of the 986 respondents, 10 (1%) believe the United States is destined to become that Kevin Costner postman movie.

Illegal Immigration — Rome fell for a number of reasons, one being they ran out of people and animals to kill in the games. But, the biggest reason was the mass immigration of the barbarians south into Roman lands. When a whole country of people moves into another country, that accepting country is no longer their own, erm, country. As the United States absorbs millions of illegals looking for WIC stamps, 2 (0.2%) believe the United States of America will become the United States of Mexico. ¿Alguien aquí habla Inglés?

Islam — The Religion of the Sword is waging jihad on the free world, claiming big chunks in the name of Allah and burkas for all women. Any American want to have to learn Arabic in order to read the Koran and live under Seventh Century sharia law? No, not like England! Of the 986 respondents, 88 (8%) believe Americans will give up their infidel status and become a card-carrying member of the Islamic religion. Then, every child can be named “Mohammed.”

Terrorism — Probably not the same terrorists that battle over whether to wear green or orange, the flavor of the day is Islamic terrorism. That “peaceful religion” is Paradise-bent on blowing up as many planes and trains as they can in order to guarantee their tickets get punched for the 70 virgin deal. Will the “enemy combatants” who are now called “persons whom the President has the authority to detain” bring America down to the prayer rug? Of the 986 respondents, 7 (0.7%) believe terrorism is the biggest threat to the future of the United States.

Socialism — “And the la-a-and of the fre-ee, and the ho-ome of the bra-ave.” Well, that was so yesterday’s style. Today’s pumps are socialism. Have the government pay for all your needs while the rich get milked? “Stick it to them!” is the chant of the current administration. Forget that the rich create jobs and that socialism means everyone gets to be poor. Of the 986 respondents, 37 (3%) believe America faces the threat of becoming… France!

Huge Federal Government — It doesn’t take a village to raise a child, now it takes the entire United States government to do it. And to accomplish the task of controlling a person from birth to euthanized death, the government’s gotta get bigger. Of the 986 respondents, 29 (2%) feel that Big Brother is on the horizon and that the only freedom left in the United States will mean getting to choose which color of soylent is for dinner. I wouldn’t recommend the green.

Economic Problems — The world has been rocked by a global recession. Companies are going under. The unemployment rate has hit 10% of the U.S. population. America parties hearty not realizing their credit cards have been cut and that the foreign creditors are beginning to think their collection of 50 state quarters won’t buy squat in the upcoming years of hyperinflation. Of the 986 respondents, 15 (1%) are thinking we’re very near to running our foreheads over the grocery checkout scanner.

Adam Sandler Movies — Of the 986 respondents, 13 (1%) puckish people voted that this “comedian’s” movies are the biggest threat to the future of the good ‘ole U.S. of A. I just don’t get why people find this guy funny. Put this choice down as a subpoint under the category “Moral Decay” (see below). Still, his movies are not worth seeing again and again.

Stance on Israel — This threat is our own personal position over Israel, considered by our voters to be the second gravest threat to the future of the United States. Is the reestablished nation of Israel a historic abnormality whose destruction will ensure peace in the Middle East and a steady flow of the black gold? Or, is Israel the fulfillment of Bible prophecy (Isa. 66:7-8: Ezek. 37:21-22; Zech. 8:4-8) and the “apple of his [God’s] eye” (Zech.2:8)? Of the 986 respondents, a whopping 384 (38%) believe messing with God’s plan for Israel is a really, really bad thing for the United States. They couldn’t be more right!

Moral Decay — The threat most voted on (though by a slim margin) was the moral decay eroding every foundation of American and even world society. Of the 986 respondents, 389 (39%) believe we are living in the morally rotten days of Noah, just as Jesus prophesied those days would return (Matt. 24:37).

Does today sound a lot like this: “people will be lovers of themselves, lovers of money, boastful, proud, abusive, disobedient to their parents, ungrateful, unholy, without love, unforgiving, slanderous, without self-control, brutal, not lovers of the good, treacherous, rash, conceited, lovers of pleasure rather than lovers of God — having a form of godliness but denying its power” (2 Tim. 3:2-5)? If it does to you as much as it does to these perceptive 389 voters, then you know America has become its own worst threat. And, you recognize the signs of the end times and realize Jesus Christ is coming back very, very soon to deal with all this mess.