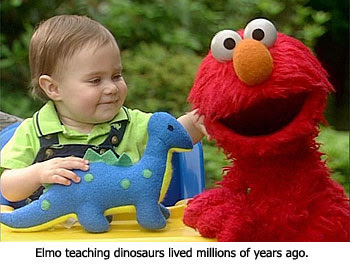 While I was watching Sesame Street with my kids one day a little red monster came out and began teaching on dinosaurs. He said, “Dinosaurs lived millions of years ago.” Could this furry, red muppet be right?

To discern whether I should be getting my dinosaur education from well known puppets, I went to Dr. Jobe Martin, former dentist, professor and Evolutionist. Having clearly seen God’s eternal power and divine nature from what has been made (Rom. 1:20), Dr. Martin came to faith in Jesus Christ and a trust in the biblical account of the six days of Creation. He and his wife Jenna Dee have since formed Biblical Discipleship Ministries based in Rockwall, Texas to teach on campuses, classrooms and churches that we can trust the Bible’s account of the Creation and Jesus as Savior.

Did dinosaurs really live millions of years ago?

What does the Bible say? We have to go back to the Bible and see what it says. God created Adam on Day Six. That is also the day He created the great beasts of the Earth. That would include dinosaurs. That means we have dinosaurs going all the way back to the beginning when man was here, which is 6,000 (not millions of) years.

We even have pictures of dinosaurs in the Grand Canyon sketched on the rocks that the Indians did. Scientists have done oxidation tests on those drawings. Now, wait a minute, if dinosaurs were supposed to exist long before man and they went extinct about 60 million years before human ever walked the Earth, then how could a human paint a picture of a dinosaur if they’ve never seen a dinosaur?

We also have those Ica Stones down there in Peru. They have thousands of them with every kind of dinosaur you can think of, which means, maybe as short a time ago as a thousand years they were seeing dinosaurs such as triceratops and stegosauruses in Peru.

Every civilization has some kind of dragon legends even though those civilizations developed totally separate. Well, what is a dragon? Probably it is a dinosaur.

The Bible even talks about dinosaurs. They are mentioned in Job 40:15-24. The verse talks about “the behemoth.” Behemoth is a Hebrew intensive name for one huge creature. One of the descriptions of it says that it has a tail like a cedar. Now, the footnotes in almost every Bible will say behemoth has got to be an elephant or a hippopotamus, but you get around behind an elephant and does its tail look like a cedar tree? Well, I guess even the people that do the footnotes in the Bibles think dinosaurs and humans did not live at the same time and that they’ve got to think up some other way to put another meaning for that word. 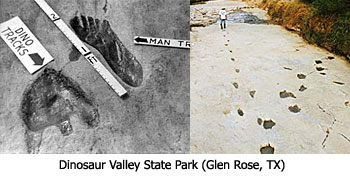 How did Noah fit a giant brachiosaurus into the Ark without sinking it?

First of all, that was one huge ship. It wasn’t like you see in Sunday School literature, this little boat with giraffes sticking out the top, okay. I would imagine that God brought in young dinosaurs. The biggest dinosaur egg as far as I know is about the size of a football, which means the hugest dinosaur could at one point fit into a football. So, God could have brought young dinosaurs as they would live longer and wouldn’t eat as much.

Why have the dinosaurs disappeared?

I think the Flood probably took care of most of the big ones. I think God brought dinosaurs to Noah and there were dinosaurs on the Ark. But, after the Flood, they come out into a different kind of environment. Before the Flood I think we had pole to pole greenhouse and so it was warm. Everything is still eating green plants. Genesis 1:29-30 says, “And to all the beasts of the earth… I give every green plant for food.” A dinosaur is a beast, lived on the Earth, and so is included with the “every.” And so, they are still eating green plants which is the food that Noah would have had on the Ark. Then they come out of the Ark, but this water canopy has come down and now we have the harsh seasons and now ice and snow. The ice age has formed. There is not as much to eat and God has also put enmity between man and beast (Gen. 9:2). God is saying to Noah, “Noah, you were living with the T-rex on the Ark and he didn’t try to eat you and you were still friends, but now he is going to try to catch you and eat you, so you need to catch him and eat him.”

I don’t think dinosaurs are totally extinct. I think there could still be some dinosaurs around. In 1925 a dead plesiosaurus nicknamed California Nessie was found rotting on the coast. And, just about 10 years ago or so, a Japanese fishing boat hauled up a dead plesiosaurus, one of those water dinosaurs. Some people say that was a basking shark, but it sure doesn’t look like one with a neck that long.

As a parent of little kids, my children are going to be taught Evolution in school. What can I do about that?

I think that comes down to discipleship. We need to teach our children what the Bible says and how to defend their faith. 1 Peter 3:15 says we are to sanctify Christ as Lord in our hearts. We are to be ready to give an answer to everyone who asks us of the hope that we have. And so, we teach them what the Bible says and how to critique things. If they see something about a dinosaur on television, we have to be able to say, “Now, wait a minute! We know because God says so that dinosaurs and humans lived together. We know what is true, and this is not true.”