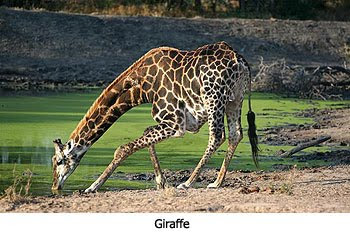 A second incredible creature that defies Evolution which I really enjoy talking about is the giraffe. A bull giraffe can be 18 feet tall! It has a huge heart to pump the blood up that long skinny neck against gravity. The heart of a bull giraffe can weigh up to 25 pounds. That is the size of a big turkey! It can be almost 2 1/2 feet long. It is a powerful pump and when it squeezes it shoots that blood up that long skinny neck against gravity.

The giraffe has got a problem when he bends his head down to get a drink of water. With all that blood the heart squeezes, well, the blood goes zoom and blows his brains out through his ears. He is now dead. And, so, he must be thinking, “I’ve got a problem. When I get a drink of water I blow my brains out. Okay, I better evolve something here to fix this.” Well, of course, dead animals don’t evolve. But anyway, it doesn’t blow his brains out. Why? Because, as the blood comes down there is like little spigot — little valves — in the artery that goes up the neck which close. When the giraffe’s head is down, there is also a sponge under the brain and it gently expands to protect the brain so it doesn’t blow out.

Now, the giraffe is getting his drink of water and he sees a lion coming up. “I’ve got to get out of here, he is going to eat me.” The giraffe jumps up, runs about three steps, and passes out — not enough oxygen to the brain. The lion eats him. He says, “I have another problem. I pass out when I get up too fast and so the lion eats me.” Well, dead animals don’t evolve. They can’t fix it. But, the giraffe doesn’t pass out, because as he raises his head up our Creator the Lord Jesus has made it so those valves open up and the sponge under the brain gently squeezes that last pump of oxygenated blood up into his brain and he is doing just fine. Only God could create that.

The textbooks still say that the giraffe got his long neck because all the food had run out and he was trying to eat up there in the trees. And I am saying, “Okay, good, but what about Mrs. Giraffe? She is two feet shorter. What about baby giraffe? If all the food is gone and he’s got to stretch up there to eat out of the top of the tree, what is baby giraffe going to eat after they are weaned from their mama?” It doesn’t make any sense at all. Maybe Millions of years between meals?!

What we have here is irreducible complexity. It’s like when we reduce fractions down and you can’t reduce them down anymore. Complexity requires all the different parts that are needed working together perfectly, so they are irreducible. You can’t take them down anymore. They need all these parts, and all the parts have to be fully functional. You can’t have a partially formed heart, or a partially formed valve, or a partially formed sponge. They have to all be there. They have to all be fully functional, or you don’t have a giraffe.