Daniel: On the Times of the Gentiles

Let’s take a look at the prophecies God gave Daniel about the end times, especially concerning “the Times of the Gentiles.”

Two years after Daniel’s arrival in Babylon, when he was about 17 years old, God gave Nebuchadnezzar a dream that greatly disturbed him. The king demanded that his wise men tell him two things — first, what he had dreamed and second, the meaning of the dream. Needless to say, the wise men were confounded.

When Daniel heard of the king’s unusual request, he turned to God in prayer seeking a revelation of both the king’s dream and its meaning. God responded by revealing these mysteries to Daniel. And Daniel, in turn, responded to the Lord with a psalm of praise (Daniel 2:20-23a):

Let the name of God be blessed forever and ever,
For wisdom and power belong to Him.
And it is He who changes the times and the epochs;
He removes kings and establishes kings;
He gives wisdom to wise men,
And knowledge to men of understanding.
It is He who reveals the profound and hidden things…

This psalm is very important for it summarizes the theme of the whole book of Daniel — namely, that God is sovereign, that He has a purpose in history, and that He has the wisdom and the power to orchestrate the affairs of men and nations to the triumph of His divine will.

Later in the book, Nebuchadnezzar makes a similar proclamation about the sovereignty of God after he has experienced the chastisement of God’s discipline (Daniel 4:34b-35):

In chapter 2, beginning with verse 31, Daniel begins to reveal to Nebuchadnezzar both his dream and its meaning. He tells the king that in his dream he saw a magnificent and awesome statue with a head of gold, a chest of silver, thighs of bronze, and legs of iron. The feet of the statue were made of a mixture of iron and clay. He reminded the king that as he was admiring the statue, a large stone suddenly appeared — a stone that had not been cut by human hands. This supernatural stone suddenly struck the feet of the statue and the entire statue was destroyed. The stone then quickly grew into a great mountain that “filled the whole earth.” 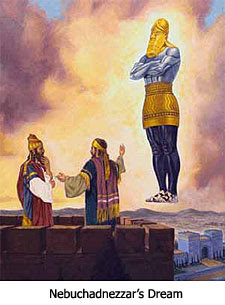 In verse 36 Daniel begins to explain the meaning of this mysterious dream, and what ensues is a breathtaking overview of Gentile empires from the time of Nebuchadnezzar to what we now call the Second Coming of the Messiah. Daniel reveals that the parts of the statue represent a succession of empires:

The Age of Gentile Rule

As you can see, this prophecy is amazing in its scope, stretching thousands of years from the time of the Babylonian Empire to the establishment of the Millennial reign of Jesus upon this earth.

It is a period of time that the Bible refers to as “the times of the Gentiles” (Luke 21:24). It begins with the fall of the last king of Judah, Zedekiah (586 BC), and will continue until Jesus returns and re-establishes the throne of David in Jerusalem.

I think it is very interesting to note that this period of Gentile domination of the world is emphasized in the very language of the book of Daniel. In chapter 2, verse 4, the language shifts from Hebrew to Aramaic, the language of the Gentile nations at that time. And the text continues in Aramaic until the end of chapter 7. It switches back to Hebrew at chapter 8 because the focus shifts at that point from the times of the Gentiles to the ultimate fate of the Jews.

Another interesting thing to note is that from our historical perspective, we can clearly see that the prophecy has a major time gap in it, something that is often characteristic of Bible prophecy. The gap comes between the fourth and fifth empires — between the legs of iron and the feet of clay mixed with iron.

The gap is obvious because there is no Gentile empire in history that corresponds to the empire of iron and clay, which Daniel tells us in chapter 7 will be a confederation of ten nations that will come together as a revived Roman Empire.

The Roman Empire ceased to exist in 476 AD. The eastern branch of it continued as the Byzantine Empire until 1453. Over the centuries there have been many attempts to restore the Roman Empire, the two most notable efforts being those of Napoleon and Hitler. But all efforts failed until the aftermath of World War II when it became obvious to European leaders that their only hope for rebuilding Europe was to reach across national boundaries and begin cooperating to build a European superpower.

That effort has produced the European Union, a revival of the old Roman Empire currently consisting of 27 member states which I believe will ultimately be divided into ten administrative regions.

This prophecy about the succession of world empires was reconfirmed to Daniel 48 years later when the Lord gave him a dream. It is recorded in chapter 7.

Daniel saw a series of terrifying beasts that arose out of the sea, the sea being a prophetic symbol for the Gentile nations. 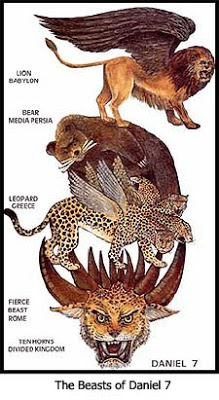 The first was a lion that had the wings of an eagle. The second was a bear that was raised up on one side and had three bones in its mouth. The third was a leopard with four heads and four wings. The fourth was a beast which Daniel described as “dreadful and terrifying and extremely strong.” It had large iron teeth and ten horns.

As Daniel stares in horror at the last beast, he suddenly notices that another horn — “a little horn” — rises up among the ten horns and pulls three of them out by their roots. This little horn has the eyes of a man and a mouth that is uttering “great boasts.” In verse 24 of chapter 7, Daniel is told that the ten horns represent ten kings and that the little horn will subdue three of them and will then begin to speak blasphemies against the Most High God. This is the first appearance in the book of Daniel of the Antichrist who will head up the last Gentile Empire that will encompass the whole world. The fact that the last empire of 10 horns grows out of the head of the fourth beast is a clear indication that the final Gentile empire will begin as a revival of the old Roman Empire.