Are There Many Roads to God? Part 5

What about those today who live and die without ever hearing the Gospel? Are they destined to Hell?

I personally believe the same principle applies to them that applied to people living in Old Testament times before the First Advent of Jesus. Their fate will depend upon whether or not they ever responded to God in faith.

The Bible says that all people have an instinctive knowledge that God exists (Romans 2:14-15). Further, the Bible says that we can realize the existence of God by observing the complexity and beauty of the creation (Psalm 19:1-6).

Because God is a just God (Psalm 89:14), I believe He will hold us responsible for what we knew. Those exposed to the Gospel and reject it will be lost. Those who have only the testimony of instinct and the creation who reject that testimony will also be lost. But those who hear the Gospel and put their faith in Jesus will be saved. And those who respond to the testimony of instinct and the creation by putting their faith in their Creator will also be saved. However, this latter group will be saved only by having the blood of Jesus applied to them as was the case with Old Testament saints.

I believe this is what Billy Graham had in mind in May of 1997 when he made a very controversial statement during an interview of him that was being conducted by Robert Schuller.1 He said that he believed that God is “calling people out of the world for His name” — including the Muslim world, the Buddhist world, the Christian world and the non-believing world. He added, “They may not even know the name of Jesus, but they know in their hearts that they need something that they don’t have, and they turn to the only light they have, and I think that they are saved, and that they’re going to be with us in Heaven.”

Schuller responded by asking, “What I hear you saying is that it is possible for Jesus Christ to come into human hearts and soul and life, even if they’ve been born in darkness and have never had exposure to the Bible. Is that a correct interpretation of what you’re saying?”

Graham’s reply was, “Yes, it is…I’ve met people in various parts of the world in tribal situations, that they have never seen a Bible or heard about a Bible, and never heard of Jesus, but they’ve believed in their hearts that there was a God, and they’ve tried to live a life that was quite apart from the surrounding community in which they lived.”

These comments by Graham produced a flood of condemnation of him. People accused him of believing in many different roads to God. It is certainly easy to see how his comments could have been misconstrued, but I believe that is exactly what happened. 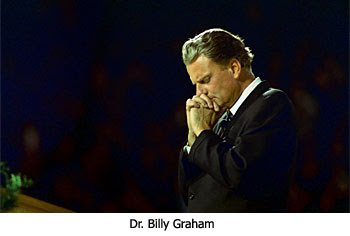 Billy Graham has never taught that there are many roads to God. On his website (http://www.billygraham.org/) there are two very specific articles about salvation in which Graham affirms his often stated belief that Jesus is the only way to God.2 In his controversial statement, which was much too briefly phrased, I think he was only saying that people are going to be judged on the basis of what they knew about God and how they responded to that knowledge, just as was the case in Old Testament times.3

Some might respond by saying, “If those who live and die without ever hearing of Jesus might still be saved by their faith in God, whereas those who hear the Gospel and reject it will be lost, then perhaps we should stop proclaiming the Gospel!”

But this statement is based on the faulty assumption that the Gospel is just a fire insurance policy. The truth is that it is much more than that, for the person who receives Jesus as Lord and Savior is blessed with the indwelling power of the Holy Spirit, receiving supernatural power to live triumphantly in a world of heartache and suffering. The person is also enabled to know God personally in this life — an absolutely invaluable blessing.

Further, I believe that any person who would respond to God in faith based on instinct and the witness of the creation is one who would accept the Gospel if exposed to it.

In Part 6 of this series answering the question, “Are there many roads to God?”, we’ll address the conundrum of the Cultural Christian.

1) Television interview of Billy Graham by Robert Schuller, May 31, 1997, On Doctrine at www.ondoctrine.com/10grahab.htm.

2) See, for example, Billy Graham’s article, “Why do Christians believe Jesus is the only way of salvation?”. See also “The Only Way?”