The Founding Fathers Were Not Deists

Were America’s Founding Fathers all Deists, believing God wound up the world and then left, or were they primarily orthodox in their Christian faith?

In a Christ in Prophecy series titled “America’s Christian Heritage,” Dr. David Reagan interviews a historian who has studied the writings of America’s Founding Fathers which reveals their innermost faith.

The Faith of the Founding Fathers

Dr. Reagan: Peter, I want to talk a moment about the Founding Fathers. In recent years they have fallen on hard times. People have attributed every vile motive to them that you can possibly imagine, and one of the things that the revisionist historians are really pounding on is that these men were not Orthodox Christians but that they were all Deists. Now respond to that, but first of all explain to us what a Deist is.

Rev. Marshall: The closest modern equivalent of a Deist would be a Unitarian, but bear in mind that Unitarians back in the 18th Century were closer to a belief in Jesus than they are today. John Adam’s for example might be able to be legitimately characterized as a Unitarian back in those days. But, most of the Founding Fathers, the vast majority of them, probably well over 90% of the Founding Fathers according to my research, were Christian believers.

Dr. Reagan: We know that absolutely from their writings and speeches, don’t we?

Rev. Marshall: Oh, yes. Here is an interesting little statistic of the roughly 250 men who deserve the title “Founding Father.” 40% of these men were not only members of varies Bible Societies in America, but office holders. 40%! There was the national American Bible Society, there were state Bible Societies in the original colonies, there were cities like Baltimore which had a Bible Society, and roughly 2/5 of the Founding Fathers were office holders. Now, you didn’t become an office holder in a Bible Society unless number one you revered the Bible as the Word of God, and number two you were committed to spreading it as the Word of God throughout American society. And, that is who these guys were.

The Faith of George Washington

Dr. Reagan: What about a person like George Washington? Was he an Orthodox Christian? 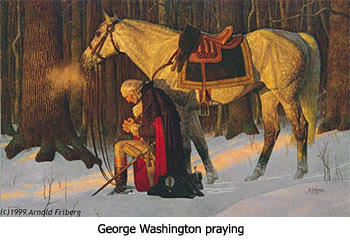 Rev. Marshall: Washington was definitely an Orthodox Christian. Bottom line on Washington is he was a typical 18th Century Low Church (meaning evangelical) Low Church Virginian Anglican. He was very, very reticent, very unwilling to talk about his personal belief, which is why he is a difficult case for historians because it is not easy to pin him down. But, if you look at the evidence for the man’s Christian faith, it is overwhelming.

Washington made over 200 separate Biblical references in all his writings — over 200! 270 times he uses the words “Divine Providence.” Now, this was not some big sort of “may the force be with you kind of thing,” okay. When he used the word “Providence” he meant a Heavenly Father who was personally involved in His creation and with His creatures. It is clearly demonstrated, for example, when he used that phrase “to find providence” in a letter to the Hebrew congregation in Savannah, Georgia. What he says in that letter is, “May that same divine providence who was with your forefathers in the Red Sea crossing and performed the miracle of delivering them from slavery in Egypt, be also with you, and so forth.” So, he is referring to the biblical God who intervenes.

Dr. Reagan: One of the things that impressed me which I ran across in your book The Light and the Glory was that when Washington became the commanding General of the Revolutionary forces. One of the very first orders he issued was for his men to go to church.

Rev. Marshall: “The General expects and requires that all…”

Rev. Marshall: “…all officers and men not engaged in actual duty shall attend Divine services.” He also reminded them to bring their muskets to church with them, just in case.

Dr. Reagan: Yes, and he also prohibited any blasphemous language.

Rev. Marshall: Oh, he was death on swearing. He hated it. One time his officers were dining with him in New York City before they evacuated. It was early in the war and they didn’t know him that well yet. One of the officers swore at the table. Washington loudly dropped his fork and silence descended on the room. He looked around the room and said one thing. He said, “I had supposed that all of us in this room were gentlemen.” No officer ever again swore in his presence. It never happened again. His men revered him because of his commitment to them and his obvious strong, moral leadership.

The Question Over Thomas Jefferson and Ben Franklin

Dr. Reagan: The modern revisionist historians often just make a sweeping statement that all the Founding Fathers were Deists, and then they immediately go to Thomas Jefferson to prove it. They’ll say, “Look at Thomas Jefferson. Here was a man who rewrote the New Testament. He took out all the miracles like the Resurrection.” 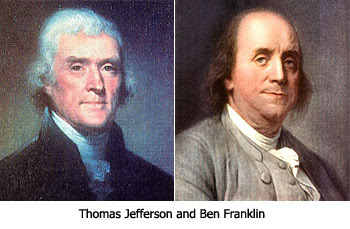 Rev. Marshall: Ben Franklin was kind of on the fence. There are quotes from Franklin that might lead you to think he was a Christian.

Dr. Reagan: Like when he insisted they start praying at the Convention?

Rev. Marshall: Oh, yes, Franklin was responsible. The Holy Spirit has to have anointed his words, I mean, they are really divinely inspired when you read them. The Scriptures tell us that not even a sparrow can fall to the ground without His notice.

At the Convention Franklin said, “Can an Empire arise without His aid?” That question broke the deadlock. That was the July 4th weekend — our country’s anniversary — which the delegates to the Constitutional Convention then celebrated in Philadelphia. They went to church and heard a very strong message about God’s hand in the Revolution, and when they came back they reconvened and that deadlock was broken. I think Franklin had a key part in breaking that.