As the signs of the end times continue to multiply, Satan must be chomping at the bit because he knows Bible prophecy (Revelation 12:12), and he realizes that the time is fast approaching when he will be able to physically manifest himself as the God of this world.

He is going to do this through a man he will anoint and then possess as his messiah (Daniel 8:24). The Bible calls this man the Antichrist (1 John 2:22), and his characteristics will be the same as Satan’s. In 2 Thessalonians 2:3 he is referred to as “the son of destruction.” Utilizing the power of Satan (Revelation 13:2), the Antichrist will conquer all the earth (Revelation 13:7). 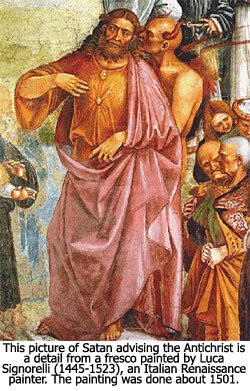 And while the Antichrist is consolidating his worldwide empire, Satan will try one last time to seize the throne of God in Heaven. This will result in a heavenly war in the middle of the Tribulation. Satan and all his demons will fight against the archangel Michael and his angels. Satan will, of course, be defeated in this insane effort to displace his Creator.

He will begin this process by possessing the Antichrist and then motivating him to enter the rebuilt Jewish Temple in Jerusalem and declare himself to be god (2 Thessalonians 2:4), demanding that all the world worship him.

Satan is determined to annihilate the Jews so that God cannot fulfill His promise to bring a great remnant to salvation. Satan has tried to do this many times in the past, as with the Spanish Inquisition and the Nazi Holocaust. This will be his last attempt, and it will almost be successful, for we are told that the Antichrist will slaughter two-thirds of the Jewish people during the last half of the Tribulation (Zechariah 13:8).

In the next segment of this “Satan’s Story” series, we’ll look at what the Bible says concerning Satan’s eternal destination.