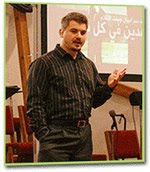 There once was a man who lived in the most ancient of times. He was considered to be the most successful rancher and farmer in all the land, known for his great wealth in livestock and cattle and every animal one could ride. To work his ranch this man had hundreds of employees, all very dedicated to their beloved employer. His greatest joy was his wife, his seven handsome sons and three beautiful daughters. Their hospitality was known far and wide, holding great parties in all the various homes that they owned. And, this great man was known by everyone for his honesty and integrity. He was a person who could be trusted, and who everyone turned to for leadership and direction.

And then, one fateful day, the worst kind of tragedy struck this king among men with many fisted blows. It was going to become the worst day of his life.

While the great man was tending to some business, one of his employees came limping up, gasping for breath. His face was bruised and beaten. Collapsing to the ground, the great man rushed over and held his employees head in his hands. “What happened?” the great man asked. The beaten man, though pained answered, “The oxen were plowing and the donkeys were grazing nearby, and then pirates attacked and carried them off. They put my fellow workers to the sword, and I am the only one who has escaped to tell you!”

While the employee was still speaking, another messenger ran up, his clothes smoldering, and out of breath exclaimed, “There was a terrible brush fire which burned up the sheep, and all your shepherds died horribly trying to save them. I am the only one who has escaped the blaze to tell you!”

No sooner was the second employee done speaking, when a third rode up, an arrow sticking out of his shoulder. Helping him off the saddle and onto the ground, the great man looked at all the blood in dismay. Before dying, the mortally wounded man reported, “Three more raiding parties have swept down on your herd of prized horses and rode off with them. They murdered everyone there, and I am the only one who has escaped to tell you!”

Seeing his wealth and people evaporate before his eyes, the great man’s worst news was yet to come. Hysterical, a woman fell at the man’s feet and through great sobs gave the final blow. “Your sons and daughters… they were holding one of their parties… and suddenly a mighty tornado struck the house. It collapsed on them. Oh, they are dead, they are all dead!”

The great man, now bereft of all he valued and loved, himself collapsed to the ground as if punched in the stomach. He let out a great cry and tore his clothes in agony as he was helped back into his house and bed. A doctor was called, and while tending him made the awful discovery that the man had cancerous growths throughout his body. His wife and friends stood at the door watching in disgust, for they blamed him for all the misfortune. His wife announced she was going to leave him.

Throughout all this great loss, all this devastation, all this misfortune this once affluent man had just encountered and had to bear in merely one short day, he proved why he wasn’t just great because of his possessions and the power that money gave him. He was great because he had something that could never be taken away from him. He had hope.

What was this man’s hope? What well of power and strength made this crushed man who lost more than anyone stand up against the storms life battered him with, to shake his fist at tragedy and declare, “Even if I am struck down dead and finally lose it all, I… will… not… lose… hope… … in Him” (Job 13:15).

And, that is the purpose of the Future Hope Conference Online — to understand what this great man understood. To have the hope he had. For, we ourselves live in a time of great upheaval, where each one of us carries some wounds of tragedy and suffering, where war looms around every corner, where our sources of money seems on the verge of drying up, where we feel we can’t trust anyone anymore. Our futures right now seems pretty grim, and very scary.

But, there is hope in the future. I’m not talking about some distant, remote future that seems too far away to grasp. I’m talking about the most wonderful future, beyond what you can imagine, and you and me can have that hope — today.

Travel with me these next few weeks here at The Christ in Prophecy Journal for the Future Hope Conference Online — and have hope.