My Most Meaningful Christmas: A Christmas Memory 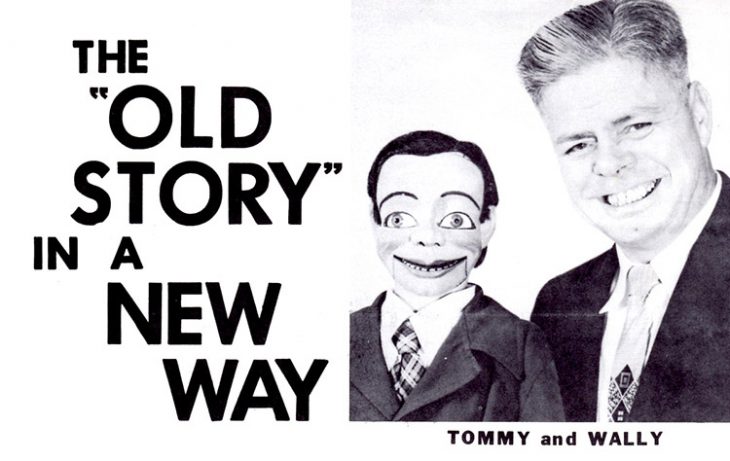 My most meaningful Christmas actually centered on a tragedy. It was 1984 and I was 11 years old. That was the Christmas when my paternal grandfather died.

When I was little, my grandparents used to make the journey from Florida up to my family’s home in Tennessee every Christmas. Though we loved them, they never were really fun to have around on the holidays. The childlike joy that my two siblings and I shared had many years ago dulled for them, and so they had to eat their breakfast and set everything just right before the family could finally open their presents. I thought I’d explode waiting for them!

The one thing that was actually fun about my grandparents’ visits was that my grandfather, Wally Jones, used to bring his ventriloquist dummy, Tommy, along with him and perform puppet shows. With only a sixth grade education, the man was a simple clerk by day, but on nights and weekends, Wally Jones transformed into a mighty missionary to children, and Tommy was his evangelistic instrument.

Tommy was a plain old slot-jawed, pug-nosed dummy that bore a likeness to the famous dummy, Charlie McCarthy, of Edgar Bergen fame. That’s because Tommy had been handcrafted by the same artist, and so as I learned later, was very valuable. I loved to put my hand into the dummy’s back and move the head up and down to make Tommy “yuk” as if laughing. A thumb switch also made Tommy’s eyes move back and forth, and an index finger lever made his mouth open and close creating a clacking of the teeth sort of sound.

I was always impressed by the accentuated facial features, lifelike eyes, and heavy makeup which allowed the dummy to be visible from way out in the audience. My little brother, not so much, because he was terrified that Tommy would spring to life and kill him. (And that’s why one night I snuck into his room and propped the dummy up holding a knife. Mike’s scream could be heard for miles!). 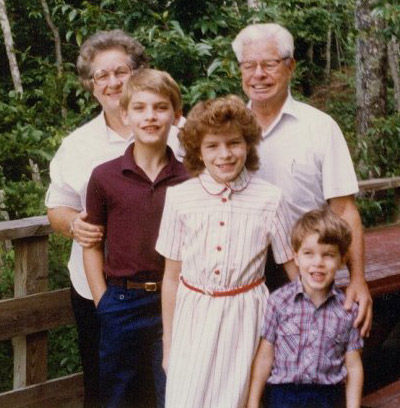 Nathan is pictured above with his grandparents and his younger sister and brother.

My dad wasn’t too fond of the dummy either, having had to grow up in youth outreaches where every other kid joked that he was the “dummy’s brother.”

The best part about Tommy wasn’t how he operated or that he wore these cute little suits, but that the dummy could come to life. In my grandfather’s hands, like a switch being thrown, Tommy’s wonderful personality manifested. He was a hilarious little guy, always ready with a wisecrack followed by a Bible verse. Likewise, Wally, normally a dour and critical man, came to life as well, finally exhibiting a warm and friendly side that few witnessed in everyday life.

One of the many children my grandfather led to the Lord, Doug Nearpass, years later described one of Wally and Tommy’s children’s outreaches:

It was a Friday night in the mid-60s…at a little church in East Rutherford, New Jersey. On Friday nights they crammed them in for Happy Hour. Kids wriggled in the pews. They sang songs, played games, and had Bible quizzes. Then came the evening’s highlight. This particular night it was Wally Jones and Tommy.

A waddling, fleece-haired gentleman, Jones was an evangelist with a wooden ventriloquist’s dummy. The elders took down the pulpit so Wally could plant his stand, a platform the size of an unfolded napkin mounted on a metal tripod. Wally and Tommy wore matching blue suits. He’d tell the same bad jokes every year; you knew what he was going to say, but you just sat there waiting.

Wally would tell a few more gags. Then he’d pick out a kid in the audience for his segue: “Billy says he’s a Christian. You know, Tommy, I’m a Christian, too.” “Oh yeah?” “Yeah, well I wasn’t always…” And then came his testimony.1

Through his “conversations” with Tommy, Wally shared how he grew up in a home where his father expected him to distill a pint of liquor in the bathtub distillery every night and have it ready before he came home from work. He revealed that at the tender age of 12, his father was blown up in a factory accident, and so he had to drop out of school and become the family provider. Eventually, he took up the drums and became a performer, partying in the Big Band lifestyle. Finally, he talked about how spiritually empty he was until a man finally led him to the Lord. 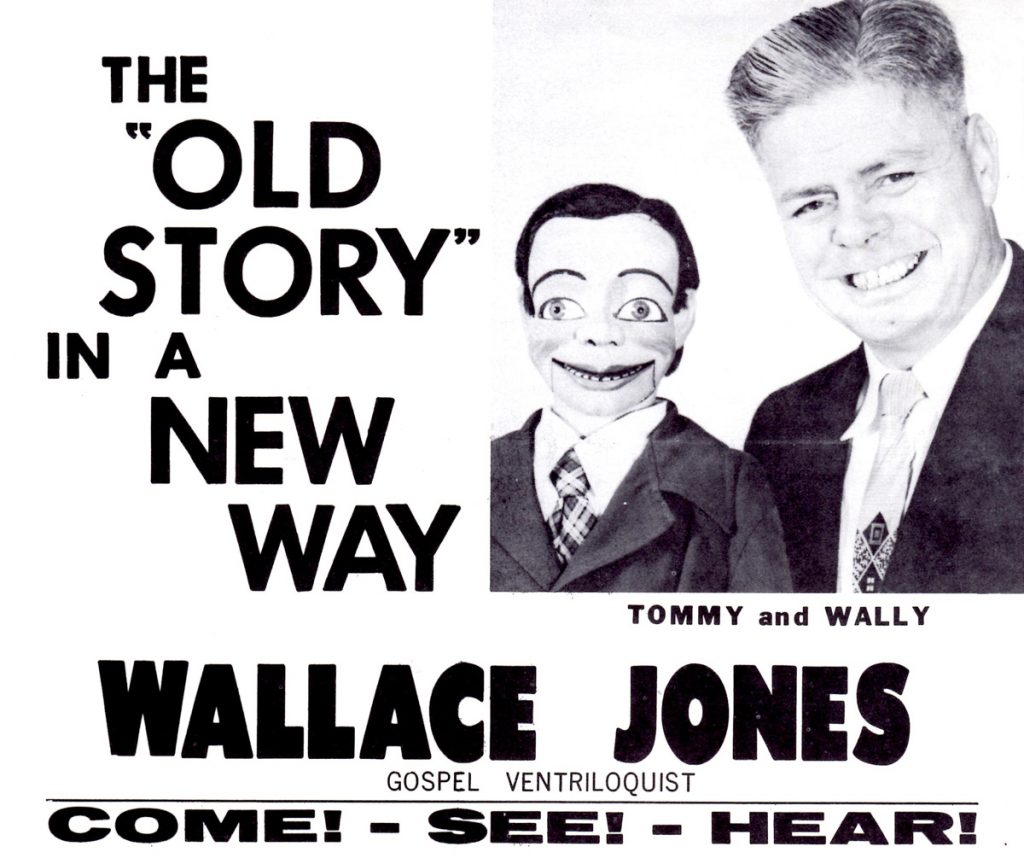 Wally’s testimony was so “haunting” that Nearpass remembers that he couldn’t shake Tommy’s little face that night:

“I remember lying in bed and thinking, ‘I’ve got to do this tonight.’ I got out of bed, and I knelt down in front of the window and prayed, ‘Lord Jesus, I want to go to heaven. Please come into my heart and forgive my sins.'”3

Doug Nearpass was so smitten by Wally and Tommy’s outreach that he devoted his own life to evangelistic ventriloquism. He and his own dummy, DigDag, went on to create a Saturday morning kids’ show that led thousands more children to Jesus Christ.

On the day after Christmas in 1984, Wally mentioned after dinner that he felt sort of funny and went into the bathroom. There he suffered a heart attack so massive the organ actually ripped. At age 74, Wally went home to his Savior.

When my grandmother passed as well some 25 years later, I inherited Tommy, along with a chest of all his little suits and shoes. I never could make him come back to “life” again. Tommy apparently had died the same day Wally did.

Being so old and fragile, I sold Tommy to a dummy museum in New York City. There, the curator assures me, Tommy stands on display surrounded by posters from various evangelistic meetings. Thousands of children who are all grown up now were led to the Lord by Wally and Tommy, and even to this day, the duo continue their witness for Christ from that little museum.

What should have been a tragedy — the loss of my grandfather — eventually became a triumph for the Gospel. Besides the thousands Wally led to the Lord, thousands more were led by Doug Nearpass, and then his student, Todd Liebenow.4 And, those thousands shared the Gospel with tens of thousands more.

I learned that Christmas how important it is that we as Christians continue to forge our own link in the evangelistic chain that started with Jesus Christ and will end when the final person is saved before the Rapture (2 Peter 3:9). My grandfather had inspired me to become an evangelist.