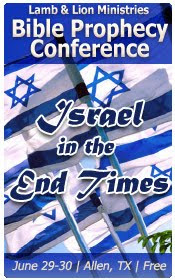 A former professor of international law and politics. He is founder and director of Lamb & Lion Ministries. He is an expert on Middle East politics and the Jews in Bible prophecy.

“An Overview of Israel in Prophecy: Past, Present, and Future”

“Israel and the Church: Has One Replaced the Other?”

A former professor of Jewish Studies at Christ for the Nations Institute. In 2006 he was invited to become the spokesman for Zola Levitt Ministries. He currently serves as a free lance writer and speaker, focusing on Israel and the Jewish heritage of Christianity.

“The Arabs and Israel”

Pastor of Faith Bible Church in Edmond, Oklahoma. He has a law degree from Oklahoma City University and a doctorate from Dallas Theological Seminary. He is a prolific writer who has produced more than 20 books related to Bible prophecy.

“Israel in the Tribulation”

Born in Russia of Jewish parents who migrated to the States in 1958. Founder and director of Ariel Ministries in San Antonio, Texas. He is a scholarly writer, best known for his book, Israelology: The Missing Link in Systematic Theology.

“Israel in the Millennium”

Founder and director of Discovery Worldwide Ministries in Hurst, Texas. He is a recognized expert on the nation of Israel, having visited the country more than 100 times. He is an author and conference speaker.

“The Salvation of Israel”

A member of the White House Press Corps. He publishes a news report called “Koenig’s Watch,” which is a weekly summary of important Middle East and world news. He has traveled extensively throughout the Middle East, meeting with both Arab and Israeli leaders.

“The United States and Israel”

One of the most gifted Messianic song writers, performers, and worship leaders on the scene today. His albums of original songs have touched hearts all over the world. His ministry is based in the Dallas, Texas area.

Jack wandered the streets homeless for 20 years before his life was transformed by Jesus. For the past 17 years he and his wife, Sally, have traveled the nation speaking, teaching, and singing. He is the featured singer on the Lamb & Lion television program, “Christ in Prophecy.”