The Abuse of Prophecy: Hijacked By Dominion Theology 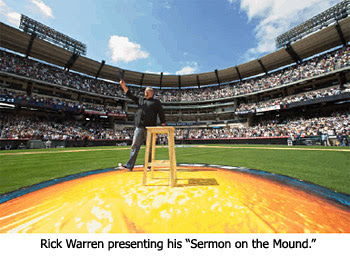 What appears to be happening in the Evangelical Movement today is that it is being hijacked by people who are advocating the old liberal Social Gospel together with Dominion theology.

Increasingly, they talk about the responsibility of the Church to “restore God’s creation.” The mission of the Church, according to them is to take the world for Christ, solve all the world’s political, economic, social, and ecological problems, and then present a restored earth to Jesus.

In April of 2010 when Rick Warren unveiled his PEACE plan before 30,000 people at the Angels Baseball Stadium in what he called his “Sermon on the Mound,” he said:11

I’m looking at a stadium full of people who are telling God they will do whatever it takes to establish God’s Kingdom on earth as it is in heaven.

The truth is that the Church was never given the task of conquering the world for Christ or solving all the world’s political and social problems.

We were commanded to preach the Gospel and make disciples. And yes we were instructed to stand for righteousness.

But the restoration of God’s creation is a task that will be accomplished by Jesus when He returns to reign in glory and majesty from Mt. Zion in Jerusalem.

The sad thing is that the new apostasy concerning Bible prophecy is distracting people from the truth that we are living in the end times and that we are right on the threshold of the Tribulation when God will pour out His wrath on those who have rejected His grace, mercy and love.

Satan must be very pleased, because that is a truth he does not want anyone to know.