Randy Alcorn’s Book Heaven Reviewed: The Not So Good

In the first half of this book review of Randy Alcorn’s book Heaven, I pointed out how well the author dispelled some misconceptions about Heaven. In this second half, I’ll point out some doctrinal areas of contention I have with this book.

The thing that amazed me was how anyone could write 476 pages about Heaven when the Bible says so little about it. I discovered four keys to the author’s in-depth coverage.

The first is the author’s imagination. He can derive more hints from a verse than anyone I have ever encountered. A good example can be found on pages 65-67 where he derives 21 conclusions from Revelation 6:9-11. That’s a total of three verses! Many of these conclusions, though not unbiblical, are nonetheless quite a stretch and need to be recognized as such.

The second key to the author’s in-depth writing on a topic so scantily covered by Scripture is that he misapplies many passages about the Millennium to the Eternal State. For example, every time the Scriptures mention “new heavens and a new earth,” as in Isaiah 65:17, he immediately jumps to the conclusion that the passage pertains to the Eternal State. But this is not always the case, and it certainly is not in the Isaiah 65 passage where death and child bearing are both mentioned.

The third factor that has enabled Mr. Alcorn to write in such depth is what I would characterize as his extraordinary common sense. Many of his conclusions are derived from what I would call common sense reasoning. For example, in dealing with the often asked question, “Will I maintain my identity in Heaven?” Mr. Alcorn writes (page 278):

You will be you in Heaven. Who else would you be? If Bob, a man on earth, is no longer Bob when he goes to Heaven, then, in fact, Bob did not go to Heaven. If when I arrive in Heaven, I’m not the same person with the same identity, history, and memory, then I didn’t go to Heaven.

The fourth and most important factor that has produced Mr. Alcorn’s in-depth thinking about Heaven is what he calls “the principle of redemptive continuity.” By this he means that eternal life will be as life is now — except that it will be perfected. So, if you want to imagine what Heaven will be like, look around you and imagine what this world would be like without disease, suffering, crime, and natural calamities. Here’s how Mr. Alcorn puts it (page 112):

Conversion does not mean eliminating the old but transforming it. Despite the radical changes that occur through salvation, death, and resurrection, we remain who we are. We have the same history, appearance, memory, interests, and skills. This is the principle of redemptive continuity. God will not scrap His original creation and start over. Instead, He will take His fallen, corrupted children and restore, refresh, and renew us to our original design.

Applying this principle to the Eternal State, Mr. Alcorn titles one of his chapters, “What will our daily lives be like?” (pages 317-324). He asks: “Will we rest? Will we sleep? Will we work? Will we have our own homes? Will we open our homes to guests?”

To all these questions he applies the principle of redemptive continuity and concludes by answering them with a resounding “Yes!”

He does, however, point out that there will be some exceptions to the principle of continuity. One of the most important being marriage and sex. The only marriage that will exist in Heaven will be that of the Redeemed to the Lord Jesus Christ. Jesus made it clear in Matthew 22:30 that in our glorified, immortal bodies we will not marry.

Mr. Alcorn reasons that since there will be no marriage in Heaven as we know it today, there will also be no sex, since it was designed by God to be a part of the marriage relationship. But he speculates that it may be replaced by something even better (page 338):

There may… be some way in which the intimacy and pleasure we now know as sex will be fulfilled in some higher form. I don’t know what that would be, but I do know that sex was designed by God, and I don’t expect Him to discard it without replacing it with something better.

In addition to his misapplication of some Millennial passages to the Eternal State, there is one other thing I found disappointing about Mr. Alcorn’s book. It was his ambivalence about the Millennium. He states point-blank that he believes there will be a literal thousand year reign of Jesus on this present earth, but he hastens to add that he is not “dogmatic” about it because “I also understand and respect the strong interpretive arguments that have been made in support of Amillennialism” (page 140).

It is amazing to me that a man who demands that all scriptures about Heaven be taken literally would turn around and say he can understand why some people might want to spiritualize the passages concerning the Millennium. I suspect that this sentence was due to pressure from the publisher (Tyndale House) in order to give the book a wider appeal.

Nonetheless, I highly recommend the book. It is thorough, carefully reasoned, biblical, thought-provoking, and highly entertaining. Mr. Alcorn is obviously a person who has spent innumerable hours thinking about Heaven. Also, his fundamental thesis about the nature of Heaven is one that Christendom needs to hear because it is directly related to the strength and quality of our hope.

The Relationship of Prophecy to Hope

Many Christians, because they know so little about the world to come, cling tenaciously to this world, living with little hope. Mr. Alcorn’s outstanding book will convince you that “the best is yet to come.”

And that, in turn, reminds me of the story of the dying woman who told her pastor she wanted to be buried with a fork in her right hand. When he asked why, she said: “Every time we have a pot-luck meal at church, we are told to keep our forks when the plates are picked up, because, referring to the desserts, we are told, ‘The best is yet to come!'”

Yes, the best is yet to come, and because of that Randy Alcorn ends his book with an interesting thought (page 415):

We have redefined eternal life to mean an off-Earth existence stripped of the defining properties of what we know life to be. Eternal life will be enjoying forever what life on Earth is at its finest moments, what it was intended to be. Since in Heaven we’ll finally experience life at its best, it would be more accurate to call our present experience the beforelife rather than what follows the afterlife.

And all I can add to that is Maranatha!

Another Recommended Book on Heaven

In addition, Dr. David Reagan deals with questions pertaining to salvation: Are there many roads to God? Can salvation be earned through good works? Can salvation be lost? He also takes an in-depth look at the resurrection of Jesus, examining the evidence for it and discussing its essentiality to the Christian faith. 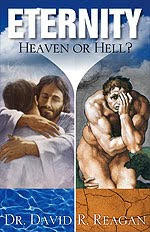