An Unexpected Door is Open By the Lord

What Lamb & Lion Means To Me

Donald Dolmus: Through Lamb & Lion Ministries, God has opened a door for the Good News of Christ’s salvation to be preached to the Spanish-speaking world. I pray the Lord will continue blessing and extending this work until the very day of the Rapture.

Guest Article: “An Unexpected Door is Open By the Lord”

I remember it clearly as if it had happened yesterday.

After reading some of the articles that Bill Salus was posting on Rapture Ready, I felt compelled by the Lord to translate some of them into Spanish. One day, I also decided to translate one article written by Dr. David Reagan. Its title was, “When was Jesus born?” After translating it, I posted it on my website En Defensa De La Fe.

A couple of days later, I informed Bill about the translation of one of his articles. I received a big surprise in my email inbox. It was an email from Dr. Reagan thanking me for translating one of his article. At the time, I didn’t know that Bill and Dr. Reagan had a close friendship and that the first had informed the latter about the work I was doing. I still keep in my storage files that first email I received from Dr. Reagan back in December 20, 2008.

All this occurred four years ago. Since then, the Lord has greatly blessed all of the efforts we have been doing to proclaim the soon return of Jesus.

You could ask, what motivated you to translate into Spanish Dr. Reagan’s work? Well, one of the main reasons was the fact that Dr. Reagan has the ability to communicate big biblical truths in a simple, down to earth way, making it easy for readers to grasp.

To this day, I haven’t had the opportunity of personally meeting Dr. Reagan due to the fact that the American Embassy in Nicaragua has rejected three times my request for a visa. Nonetheless, in May of 2011, I received another surprise — the visit of none other than Nathan Jones, Lamb & Lion’s Web Minister. Nathan wrote a report of his visit to Nicaragua that appeared in the 2010 July-August issue of the Lamplighter magazine. Nathan and I have grown close in our friendship and I often go to him asking for his advices in many areas, especially with regard to his knowledge on Web managing. During his visit, I had the opportunity of serving as his translator in a Bible prophecy conference held at the church I attend. 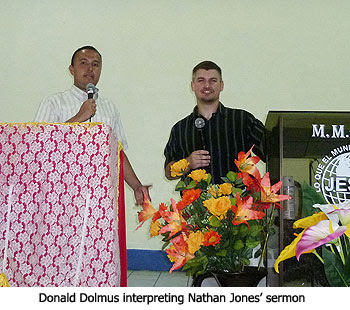 Today, people all over the Spanish-speaking world are reading, studying, reproducing and sharing the articles and Bible prophecy studies produced by Lamb & Lion Ministries, which before translation was out of their reach due to the language barrier. Thanks to technology, especially the Internet, distance is no longer a factor that affects the transmission of our message.