The Abomination of Abortion: What To Do 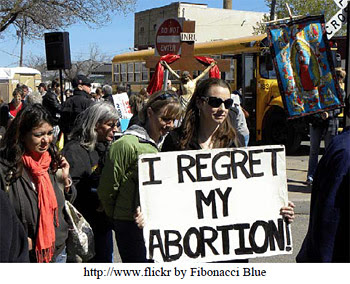 First, we as Christians need to take a stand for righteousness. Our Savior has called us to be light and salt in the world (Matt. 5:13-14). We cannot stand by passively and allow the innocent to be murdered. Proverbs 24:11 says, “Rescue those who are unjustly sentenced to death; don’t stand back and let them die” (TLB).

Psalm 82:4 says, “Rescue the weak and needy; deliver them out of the hand of the wicked.” What could possibly be weaker than a baby in its mother’s womb? What could be more wicked than a medical doctor who perverts his life-saving skills by using them to kill babies?

Proverbs 31:8 says that we are to speak out for those who cannot speak for themselves, for those who are unfortunate. Amos 5:15 admonishes us to “hate evil, love good, and establish justice.”

Christians cannot be neutral about abortion. We must speak out against it. Some of us will be called of God to do more than that. God does not call all of us to do the same thing.

A Word of Caution

God cannot be mocked (Gal. 6:7). He is going to deal with our sin of abortion. The Word says He is “slow to anger and great in power, and the Lord will by no means leave the guilty unpunished” (Nahum 1:3).

We are already experiencing the consequences of abortion.

They include a depreciation in the value of life and a corresponding increase in violent crime. Another consequence is a generation of women burdened with guilt and depression for their abortions. We are also missing a whole generation of young people who were aborted and who could now be living productive lives, paying the Social Security taxes necessary to support the very parents who killed them.

As in the days of Isaiah, “God looks for justice, but He sees bloodshed; He looks for righteousness, but He hears cries of distress” (Isa. 5:7). Therefore, “because we have rejected the law of the Lord Almighty and have despised the Word of the Holy One of Israel, the Lord’s anger burns against us and His hand will strike us down” (Isa. 5:24-25).

The hand of God can be stayed only by our repentance. We must roll back the abominable decision of the Supreme Court. It must be overturned, just as the Dred Scott decision was ultimately invalidated. So, speak out, pray, and write to your political representatives. Choose life!

A Word of Comfort

I want to conclude with a word of comfort for those who have had an abortion. God hates what you did, but He loves you. He is willing to forgive and forget if you will repent of your sin and receive His Son as your Savior.

In a remarkable passage in 1 Corinthians 6:9-11, Paul says that the church in Corinth was full of former fornicators, idolaters, homosexuals, drunkards and swindlers. But, Paul proclaims that they had been washed, sanctified and justified before God through their repentance and acceptance of Jesus as their Savior. Read this passage and then turn to Romans 8:1 and rejoice in the promise that “there is therefore now no condemnation for those who are in Christ Jesus.”