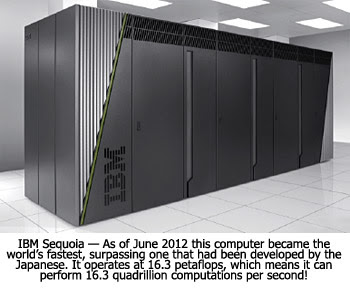 In this third segment of our exploration of the Exponential Curve, we’ll consider the explosive growth of computers, military power and violence.

5) Computers — Computer technology has contributed to the rapid acceleration of many aspects of life, and, of course, the exponential curve applies to the development of computers as well. Anyone who tries to stay on the cutting edge of what is new in computer equipment knows that it is a never-ending battle that requires a lot of money. Advances are so rapid that equipment is out of date within a few months.

In 1970 I was a professor at a college where we bought an IBM computer for $100,000. It operated off punch cards, it was so large that it filled a room, and it generated so much heat that we had to have the room equipped with additional air conditioning. The computer’s memory was 64K!

Now, if you are not a computer buff, that may not mean much to you, but keep reading because I’m going to make it understandable; and in the process, I’m going to illustrate how rapidly computer technology has developed.

Ten years later in 1980, this ministry bought one of the first desktop computers made. It was a Tandy TRS 80, Model II. It cost $4,800 (equivalent to $12,500 today!). When I turned it on, I was astounded by the first thing that appeared on the screen: “64K Memory.” In ten years’ time we had gone from a computer that weighed more than a ton to one that sat on a desk top, and the price had dropped 95%. But the memory was the same!

Ten years later in 1990, I went to Radio Shack and bought an electronic Rolodex small enough to fit into the palm of my hand. It cost $90. And when I turned it on, guess what? The first message that appeared on the screen was “64K Memory.”

Today, you can purchase a computer with 4 gigs of memory and a 1 terabyte hard drive operating at 2.7 gigahertz for less than $500!

The exponential curve also applies to data storage units. The first floppy disk that we used in the TRS 80 was 8″ in size. It held 300,000 bytes of information. A few years later the 5 1/4″ disk appeared. It would hold 700,000 bytes. Then came the 3 1/2″ disk. Its capacity was 1.4 million bytes! The next hottest thing to come along was the CD Rom disk. I recently read an advertisement for a CD that contained 134,000 pages of theological documents — the equivalent of 1,400 pounds of books!

Today, my data storage device of choice is a tiny thumb drive or flash drive that holds 30 gigabytes!

6) Military Power — Throughout most of recorded history, the maximum power at man’s disposal consisted of bows and arrows, spears, and catapults. Even at the beginning of this century, war was still primitive. World War I turned into a stagnant war of attrition because neither side had sufficient power to break out of the trenches.

Eighty years later, we have air power, armored power, nuclear weapons, and sophisticated bacteriological and chemical weapons. We have ICBM’s that can deliver a nuclear payload halfway around the world. We have laser-guided missiles that can guide a bomb down a smoke stack hundreds of miles away. And we have nuclear submarines that can circle the globe without surfacing. Incredibly, just one of those subs today has more firepower than all the bombs dropped in World War II!12 It is no wonder the Bible says that in the end times “men will faint with fear” over the expectation of “the things which are coming upon the world” (Luke 21:26).

7) Violence — I don’t think I have to emphasize that violence and lawlessness have been increasing. But it is hard to comprehend how rapid the increase was during the 20th Century.

It is estimated by experts that the number of people killed in all the wars fought from the time of Jesus until 1900 was 40 million. In the 20th Century 231 million people died in wars, making it a century of unparalleled carnage.13

There are currently a total of 38 wars or civil wars raging worldwide.14 And then, of course, there has been the advent of international terrorism, resulting in the loss of tens of thousands of lives. In 2011 alone there were 10,283 terrorist attacks worldwide.15

Within the United States, violent crime increased 430% between 1960 and 2010. During the same period, the country’s population increased only 67%.16

In the fourth segment of our exploration of the Exponential Curve, we’ll look at more examples and consider the terrible decline of society and marked increase in natural disasters.

13) Milton Leitenberg, “Deaths in Wars and Conflicts in the 20th Century,” www.cissm.umd.edu, page 4.