Observations on the Woman of Revelation 17: Catholic Apostasy 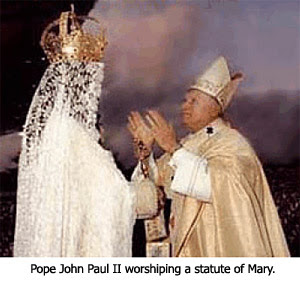 The apostasy of the Catholic Church is manifested first and foremost in the Church’s concept of salvation. The bottom line is that the Catholic Church has never accepted the great Biblical truth that was restored to Christendom by the Reformation — namely, that salvation is by grace through faith, and not by works (Ephesians 2:8-10).

Catholic leaders will deny this. They will affirm salvation by grace. But the fruit of their teaching and preaching testifies otherwise.4 There are millions of Catholics around the world who believe they are saved because:

they were born a Catholic, or
they received Catholic baptism as infants, or
they attend Mass twice a year, or
they go to confession regularly, or
their name is on the roll of a local parish, or
they live a good, clean moral life.

All these misguided concepts translate into one thing — belief in salvation by works. And the people who express them are spiritually lost because they have never been born again. They have no personal relationship with Jesus as their Savior and Lord.

This raises the question of whether or not such true believers within Catholicism should remain there or leave. I think that question can best be answered with a series of questions:

1) Can a person grow spiritually in an atmosphere of idolatry where people are encouraged to bow before images of Mary and Saints and pray to them?

2) Can people reach their full spiritual potential in a church that denies the priesthood of all believers (I Peter 2:9), requiring its people to approach God through special priests who are not ordained in God’s Word?

3) Can people grow in the image of Jesus in a church that de-emphasizes the importance of Bible study and exalts the traditions of men over the Word of God?

4) Can people ever have any confidence of their salvation in a church that requires cleansing punishments for sin in the form of penance in this life and purgatory after death?

5) Can a person ever come to a true understanding and appreciation of the unique role and work of Christ when His mother is exalted as a co-redeemer and His sacrifice on the Cross is debased by a teaching that He must die repeatedly in the Mass?

I could go on and on, for the heresies of the Catholic Church are great in number and profound in their implications for the Christian faith.

The Veneration of Mary

Particularly appalling in modern history has been the increasing emphasis given to the worship of Mary. This gross idolatry was accentuated in 1978 by the selection of a Polish Pope, John Paul II. That’s because the adoration of Mary has long been a central focus of Polish Catholicism.

Again, Catholics will deny that they worship Mary. They argue, instead, that they simply give her the honor that she deserves. But, again, their actions speak louder than their words, and in this case, official words are sufficient to establish the point. Consider, for example, the following statement taken from an official Catholic publication:

Mary is co-redemptrix of the human race… because with Christ she ransomed mankind from the power of Satan. Jesus redeemed us with the blood of His body, Mary with the agonies of her heart… The church and the saints greet her thus: “You, O Mary, together with Jesus Christ, redeemed us… God has ordained that no grace will be granted to us except through Mary… No one will be saved or obtain mercy except through you, O Heavenly Lady… No one will enter heaven without passing through Mary as one would pass through a door… O Mary, our salvation is in your hands.”5

This is blasphemy of the worst sort. It is the ancient Babylonian mystery religion parading in new clothes, worshiping Mary as the “Queen of Heaven.”

In the third and last part of this series of observations on the Woman of Revelation 17, we’ll look at what a believing Catholic should do when they realize how idolatrous the doctrines of the Catholic Church have become.

4) An excellent resource on the issue of works salvation is a booklet by Albert James Dager entitled, Six Roman Catholic Doctrines That Nullify Salvation by Grace (Media Spotlight, 1988). For a copy write to Media Spotlight at P.O. Box 290, Redmond, WA 98073.