Observations on the Woman of Revelation 17: Roman Spiritual System 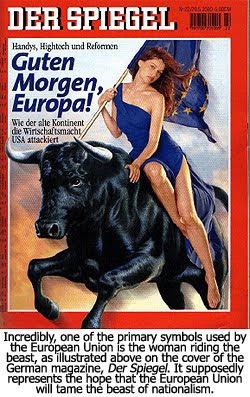 I believe the evil woman pictured in Revelation 17 symbolizes the city of Rome and its corrupt spiritual system. And I believe that system will initially be an amalgamation of the world’s pagan religions, including apostate Protestants, under the leadership of the Roman Catholic Church.

In that regard, I think it is significant that in 1989 the Archbishop of the Anglican Church, Robert Runcie, called for all Christians to accept the Pope as “a common leader presiding in love.” Runcie made his appeal at an evening prayer service midway through his first official visit to the Vatican. “For the universal church, I renew the plea,” he said. “Could not all Christians come to reconsider the kind of primacy the bishop of Rome exercised with the early church, ‘a presiding in love’ for the sake of the unity of the churches in the diversity of their mission?”1

We have already been given a chilling preview of what is to come. It occurred in November 1986 in Assisi Italy when Pope John Paul II called a convocation of the leaders of twelve world religions to pray to their gods for peace. One of those who came was the Dalai Lama who is considered to be a god himself! The show was stolen by an American Indian chief who danced and whooped to his god.2

Why did the Pope feel it was necessary to bring together pagan religious leaders to pray to pagan gods? Does the Pope feel his own god is inadequate to the task? The most obvious answer is that the Pope believes all the leaders were praying to the same god.

This is one of the most popular ideas in Christendom today. It is the concept that God has revealed Himself in many different ways to different peoples. The conclusion, therefore, is that there are many roads to God. It is tolerance gone to seed. It also contradicts the Scriptures which say that God has revealed Himself in only one person, His Son, Jesus of Nazareth (Hebrews 1:1-2).

In December 2000, Pope John Paul muddied the waters further when he addressed 30,000 pilgrims in St. Peter’s Square. He told the multitude “that all who live a just life will be saved even if they do not believe in Jesus Christ and the Roman Catholic Church.”3 The Pope added, “The gospel teaches us that those who live in accordance with the Beatitudes… will enter God’s kingdom.” He concluded by observing that all that is needed for salvation is “a sincere heart.”

In short, the Pope made a liar of Jesus Christ who proclaimed, “I am the way, and the truth, and the life; no one comes to the Father, but through Me” (John 14:6). Jesus is also recorded in John 17:3 as having said, “And this is eternal life, that they may know You, the only true God, and Jesus Christ whom You have sent.”

Humanism is the belief in Man. It is the foundation of all pagan religions, including pagan Christianity. The False Prophet will call on all humanity to put its trust in the Antichrist as its Lord and Savior. And since the Antichrist will be possessed by Satan (Revelation 13:2), the whole world will in reality be worshiping Satan himself.

Considering the fact that the Catholic Church is most likely to be the cornerstone of the Apostate Church of the first half of the Tribulation, what should be our attitude toward Catholicism? Was the Reformation simply much ado about nothing? Has modern day Catholicism reformed itself sufficiently to justify our overlooking doctrinal differences in the name of Christian love and unity?

The first point I would like to make is that Catholicism is not nearly as apostate as some forms of mainline Protestant Christianity. The Catholic Church highly affirms the virgin birth, the deity of Jesus, and the reality of the Resurrection. All three of these cornerstone truths have been rejected by mainstream liberal Protestantism in its obsessive search for what it calls “the historical Jesus.” In short, apostasy is not a Protestant versus Catholic issue. There is apostasy on both sides of the fence.

If Catholicism affirms the deity and resurrection of Jesus, then where does it fall short of Biblical standards? Where is the apostasy?

In the second part of this series of observations on the Woman of Revelation 17, we’ll look at the various doctrinal apostasies within the Catholic Church.