Words With Consequences (Part 1 of 4) 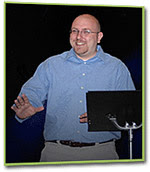 It was Thanksgiving Day. My family and I were getting ready to go to a friend’s house for dinner. We were in charge of bringing a couple of the food items. My wife Deb had spent hours working on her famous stuffed mushrooms, getting all the flavors blended just right. I don’t even like mushrooms, but even I think these are delicious!

As we’re getting ready to leave, I was carrying out the mushrooms in a cupcake carrier. It had a lid attached to the bottom instead of the top, which is convenient and effective, if the lid is on tight. Ours, it turned out, was hanging by a thread, even if it seemed solid at the time. Well, I was walking down the front steps and got to the bottom of the stairs. All of the sudden, the bottom drops out of the carrier. All the mushrooms fell out and onto the landing. Stuffed mushrooms splattered everywhere. Nothing is salvageable. Nothing!

I stood in horror looking at the mess. The only thing that I could do was scream out the only word that seemed appropriate. Let’s just say that it was not a “minister-approved” word. It may have been four letters long. And, I said it LOUD. It was so loud that my elementary-aged son, who was out in the van in the driveway, come back to the house and asked, “Did Dad just say the s-word?” It was so loud that our neighbors, who were out in their front yard hanging Christmas lights, all heard it (sorry, Gary and Tammy).

I readily admit that this was not the proudest moment of my life or my ministry career.

I’m pretty sure though that I am not the only one who has done such a thing. Confession time! Stand up if you’ve ever:

If you didn’t stand up yet, well, your time will come.

James 3:2 reveals about humanity that, “All of us make a lot of mistakes. If someone doesn’t make any mistakes when he speaks, he would be perfect. He would be able to control everything he does.”

Mistakes of the tongue are everywhere. We all at one time or another have issue with it. So, the question for us is, “What do we do about it?” What do we do about our tongue’s tendency to say the wrong things? Let’s explore this question and consider a few options.

Maybe it’s time to stop worrying about it. Maybe we just come to terms with the fact that we say bad things and just let it go. Since we all at some time say some bad stuff, is that then so horrible?

How many times since childhood have we been taught, “Sticks and stones may break our bones, but words will never hurt us?” How often has you wife told you, “You’re thinking it, so you might as well say it.” The country music philosopher Toby Keith advises, “Don’t compromise, even if it hurts to be yourself.” As an anonymous pundit once stated, “Anything said on the way to the bathroom is non-binding as you’ll agree to anything it that situation.”

We may say some things that we don’t mean or like or that others don’t like, but it could be worse. After all, saying whatever comes to mind has some positives. Take these for example:

Just letting it ride may seem like a pretty good way to handle our tongues. But, the Bible obviously has totally different take on this topic. As James 3:9-10 admonishes, “With our tongues we praise our Lord and Father. Yet with the same tongues we curse people who were created in God’s likeness. Praise and curses come from the same mouth. Brothers and sisters, this should not happen.”

The Bible declares then that “just let it ride” is not a viable option. We should not be saying everything that comes to mind, especially because a lot of what comes to mind is evil.

James goes on in chapters 3-5 to share some of the bad things that come off our tongues when we aren’t careful:

If we’re honest with ourselves, we know that there have been some things said to us at some point in our lives that really hurt. We’d almost rather take the sticks and stones than the words that were said, right? Maybe they were mocking words, or maybe they were hateful words, or maybe they were critical of us personally. Because of the blow to our feelings and self-esteem, we know that words do have power. God Himself spoke the universe into existence, and while we may not have that power to create with our words, we certainly have the power to destroy with them. With a mere word we can destroy someone’s confidence, destroy trust, and destroy peace.

I can still remember a careless word once given by my dad. I was a state band competition and had just completed a difficult solo on my euphonium. I knew it wasn’t my best performance ever, but I was playing music that was above the difficulty level of the competition. As I walked out, I just wanted some words of encouragement to steady my nerves and lift my spirits. Instead, what I got was my dad who walked out and silently flashed a “two” with his fingers. He was saying that my performance was flawed and there was no chance of me getting a “one,” which is the rating that was my goal. What he said with those unspoken words wasn’t meant to be mean-spirited, but it wasn’t encouraging. To me, it was like he flat out stated, “Son, you just aren’t good enough.” And it hurt.

Maybe it’s time to look at another option, which we’ll do in the second part of this series on words with consequences.