If the American Constitution hasn’t changed, then what has?

(Editor’s Note: This essay is an edited version of the sermon delivered by Robert Jeffress at the Lamb & Lion annual Bible conference which was held in June of this year. Jeffress is the pastor of First Baptist Church in Dallas. The sermon is based on his book, Twilight’s Last Gleaming, published in 2011 and available on Amazon.com. The sermon is available in full in our DVD album, Living on Borrowed Time.)

In other words, if we post the Ten Commandments, children may actually read, venerate and, heaven forbid, obey them!

Now that was in 1980. In a strange twist of irony, 17 years later in 1997, in the hallways of Heath High School in Paducah, Kentucky, a group of students were meeting together before school began to have a time of prayer. And as those students were praying together, with their eyes closed, a 14 year old approached them with a handgun and started firing. He seriously wounded five students and killed three. This all occurred in a public school hallway where the Supreme Court 17 years earlier had said, “You cannot post the words, ‘Thou shalt not kill.'”

Why may not the Bible, especially the New Testament without note or comment be read and taught as a divine revelation in the [schools] — its general precepts expounded, its evidences explained, and its glorious principle of morality inculcated? Where can the purest principles of morality be learned so clearly, or so perfectly as from the New Testament?

The Meaning of the First Amendment

Now you have to ask yourself the question, “What’s changed?” The Constitution hasn’t changed. What has changed is our culture. We have allowed the liberal activists to pervert the meaning of the First Amendment. Let’s be clear about what the First Amendment says and what it doesn’t say. The First Amendment, commonly known as the Establishment Clause, says, “Congress shall make no law respecting an establishment of religion, or prohibiting the free exercise thereof.” That Amendment simply says Congress cannot establish a state church and it cannot prohibit the free exercise of religion. And yet we have people who have perverted that into meaning that there is some imaginary freedom from religion that is found in the Constitution.

Did you notice here in our metroplex, just a couple of weeks ago, that a Joshua High School student who was valedictorian of his class dared to violate the school’s regulation and mentioned Jesus Christ in his speech? He was threatened with having his career at the Naval Academy ruined because he did such a thing! And the public school district lawyer said this: “We have to balance this student’s right and freedom of religion with other students’ freedom from religion.” Where is that in the Constitution? There is no constitutional guarantee that somebody doesn’t have to listen to a prayer at a graduation ceremony or see a nativity in the public square, or look at the Ten Commandments in the courthouse. That is nowhere in the Constitution. What the Constitution says is everyone is free to practice his or her religion.

Right before I came over here, I got an advance copy of the Dallas Morning News, for tomorrow morning. And we are on the front page, our church. Some architectural critic they hired to criticize everything is criticizing our new building downtown. One of the things he said that nearly caused me to fall out of my chair was, “This church has imposed itself on the community downtown with a cross and a Scripture verse. And it is so beautiful that it lures people to come in and look at it.” He added, “And Jeffress is showing how he violates the separation of church and state.” Have you ever heard of an architectural critic condemning a church for being too open and inviting people to come in? That is the culture in which we are living right now. 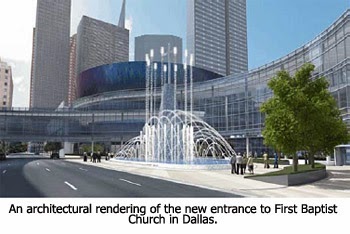 You say, “Now pastor, how do you know that? How do you know such a thing?” It is very clear historically. Supreme Court Justice Joseph Story was appointed to the Court by James Madison in 1811. Madison is the man who is known as the architect of our Constitution. Now, I want you to listen to what Justice Story said about the First Amendment in his Commentary on American Law. He said:

The real object of the First Amendment was not to countenance, much less to advance Islam or Judaism or infidelity, by prostrating Christianity; but the purpose was to exclude all rivalry among Christian sects, Christian denominations and to prevent any national ecclesiastical establishment which should give a hierarchy the exclusive patronage of the national government.

Ladies and Gentlemen, even if the Supreme Court had ruled correctly in the last 50 years, do you think that changes God’s mind? Do you think that when God looks at America He says, “Oh, I am going to treat you differently than any other nation?” Ladies and Gentlemen — this is going to offend some of you — God doesn’t get chill bumps when He hears the Star Spangled Banner! Did you know that? God is not a respecter of people or nations. Any nation that reverences God is going to be blessed by God. And any nation that rejects God, including the United States, will be rejected by God.

In the third segment of Dr. Jefferess’ sermon on the implosion of America, he’ll identify explosion numbers three and four.