Welcome along to Day 4 of our Lamb & Lion Ministries’ 2014 Israel tour! Today we left the beautiful seaside city of Tel Aviv and headed north along the flower-covered highway. The highway trip proves that Israel, once a barren wasteland, is now a garden once more. Our journey took us to the old Roman provincial capital of Caesarea Maritima, past port Haifa, to the Crusaders’ fortress in Acco, and we finally finished our day in Tiberias on the Sea of Galilee. 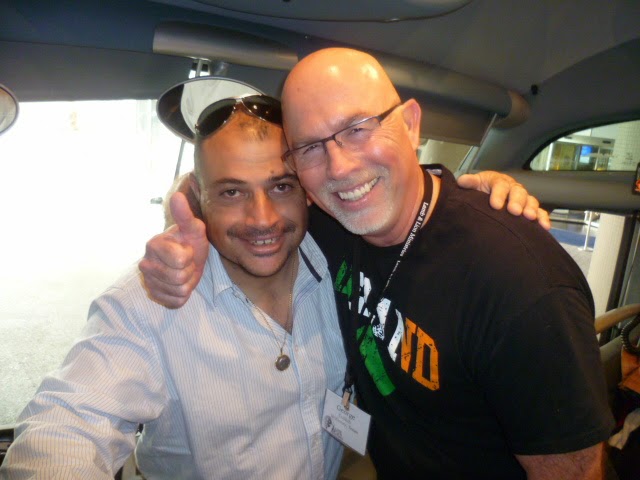 Our talented bus driver is Dov (left), which he says means “the bear.” He indeed has a bear of a grip, and the agility to navigate that big bus along impossibly tight roads. A Messianic Christian, he can often be heard singing along with the P.A.’s messianic tunes as we coast up the coastline. 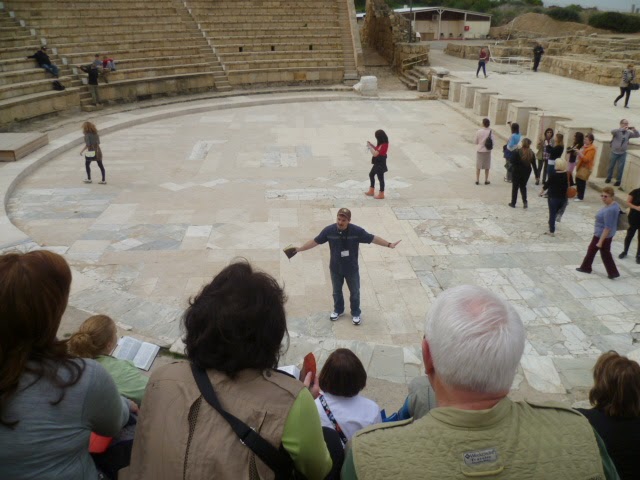 In the ruins of the Caesarea Maritima theater, Nathan Jones shares the Acts 12 story of Herod Agrippa, who on that very spot was worshipped as a god and the true God struck him down with worms. 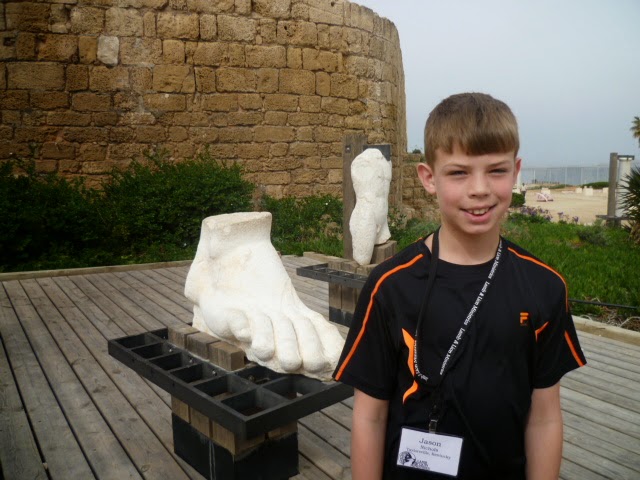 Jason, our resident tween on this trip, shows off his big foot. 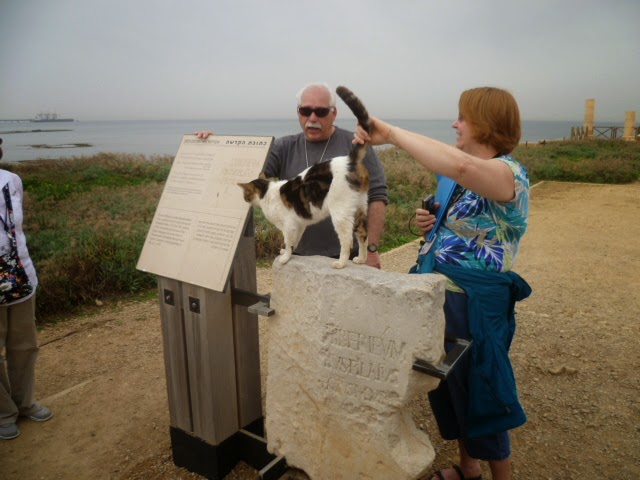 Our guide Ronnie being upstaged by a cat. It sits atop a replica of the Pilate Stone, archaeological proof that there was indeed a Pontius Pilate from the Bible. Vicki, you may not want to pull that cat off by the tail! 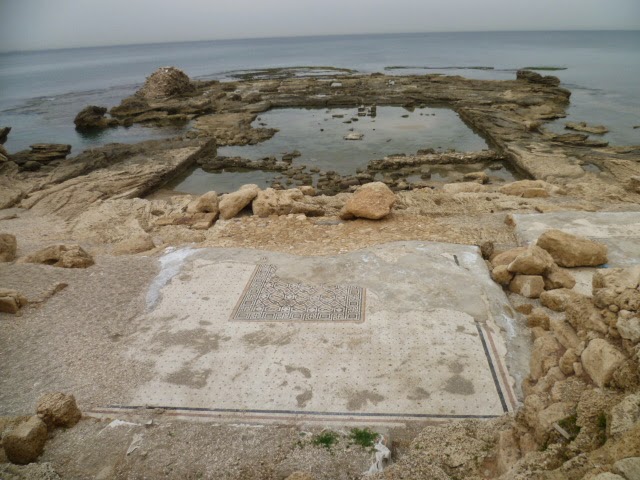 Here lies the remains of the Roman Empire. R.I.P. The mosaic floor and the outline of the pool are all that remains of the seaside palace. The Apostle Paul spent two years in prison just yards away. 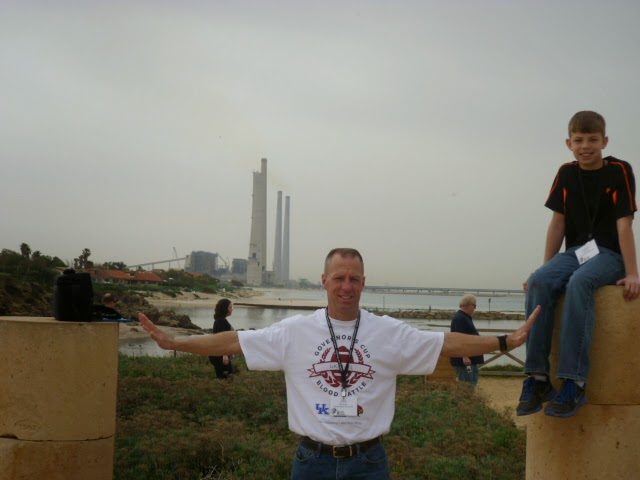 With the strength of 10 Samsons, Jim illustrates how old (ruins) mesh with the new (power plant) all over Israel. 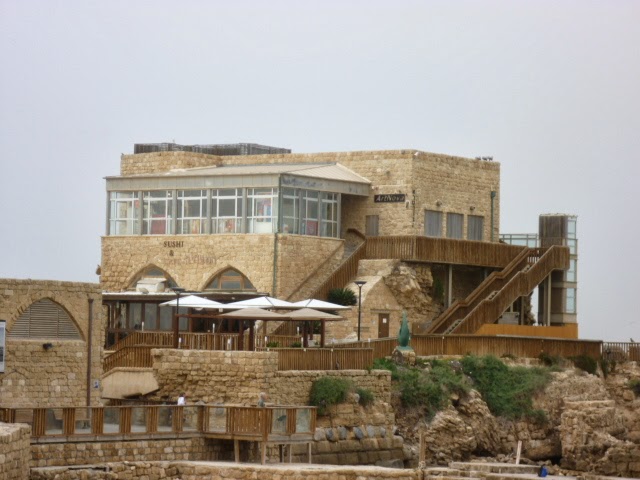 Once a Middle Ages hostel for wayward pilgrims stopping off in the Holy Land, it’s now a sushi bar. After a three month journey by boat battling pirates and storms, a pilgrim could use a good California Roll. 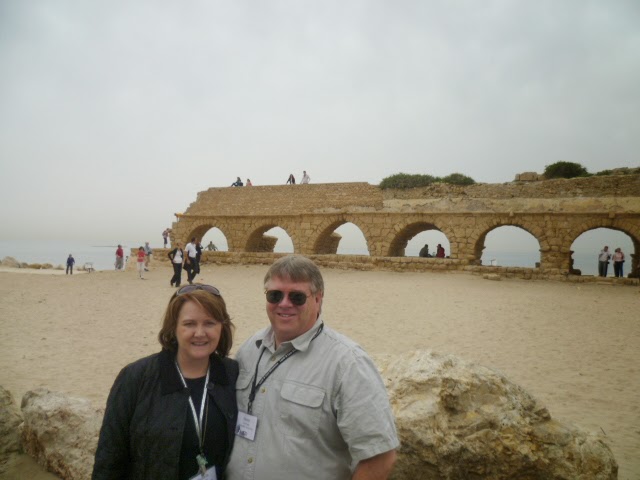 The Roman aquaduct runs nearly 14 miles south from Mount Carmel with (get this) only a 10 inch decline. Those Romans had some amazing engineers! 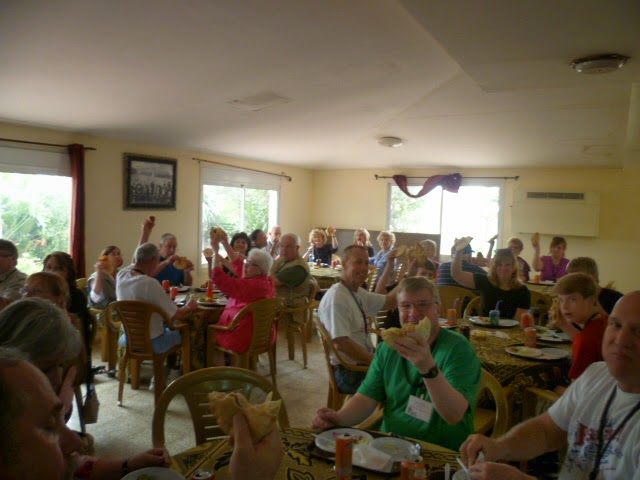 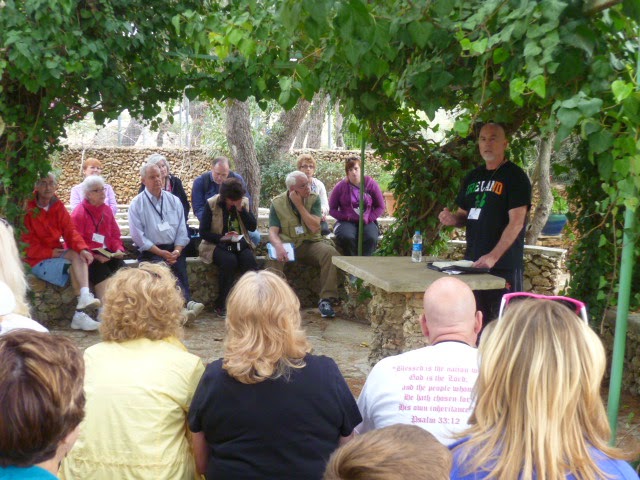 George atop of Mount Carmel’s beautiful rock gardens shares both the dramatic story of the Prophet Elijah’s challenge to the prophets of Baal (1 Kings 18), and his touching testimony. 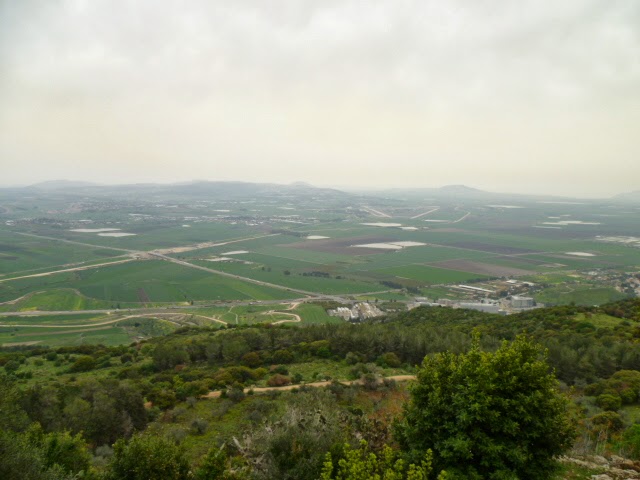 Our pilgrims looked out over the stunning vista that is the Valley of Jezreel that will one day hold the final Battle of Armageddon and Jesus Christ’s return with His saints. We read Joel 3, Zechariah 14 and Revelation 19 to understand what will unfold. 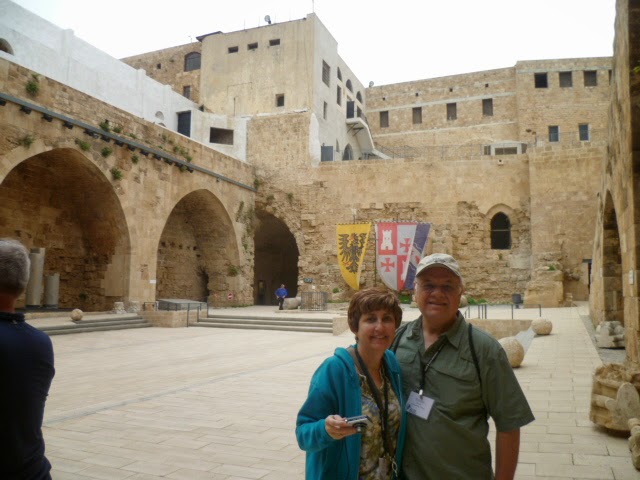 Up way north in Acco, we explored the Crusaders Castle. It was the site of the Crusaders’ capital after they lost Jerusalem, battles involving Napoleon, site of a daring mass escape of Jewish prisoners held by the British, and film location for three movies. 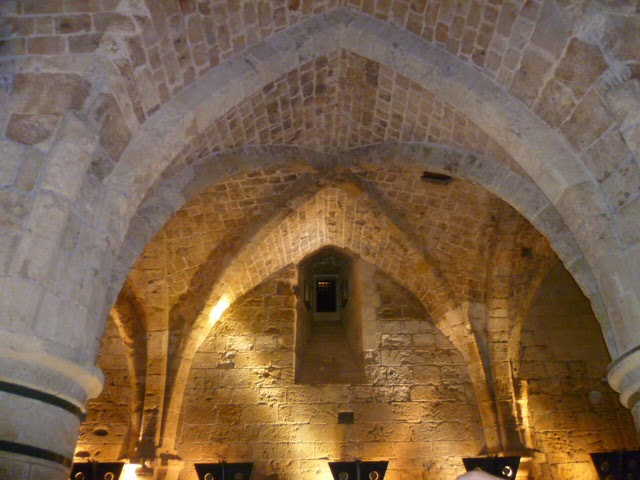 Deep down in the catacombs of the fortress where once defeated men were held chained along the walls, we lamented over the Church’s historical abuse of the Jews by reading Dr. David Reagan’s article on Anti-Semitism.

Tomorrow for Day 5 we will explore the Sea of Galilee, but not walk where Jesus walked. Instead, we’ll use a boat.