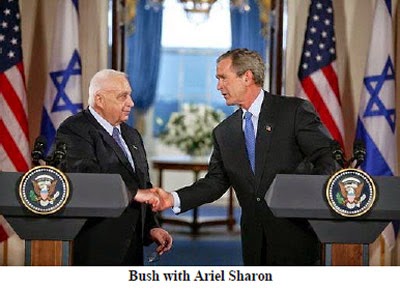 The second Bush came to power by confirming to Israel’s Prime Minister, Ariel Sharon, that he was not going to follow his father’s hard-line policy toward Israel.53 But hardly had he given this assurance, when in 2001 he turned around and called for the establishment of a Palestinian State, the first American president to do so publicly and formally, proceeding to make it an official part of U.S. foreign policy.54

The Bush Administration tried to put out the firestorm this announcement produced by claiming that President Clinton had endorsed the same policy. It was true that in 2001, two weeks before leaving office, President Clinton had stated that he personally believed that the Middle East conflict could not be resolved without creating “a sovereign, viable Palestinian state.”55 But he had not made that objective a formal goal of U.S. policy. George Bush did.

Bush also gave new impetus to the Land for Peace strategy by demanding that Israel surrender the Gaza Strip. And in the midst of the withdrawal in the summer of 2005, Bush’s Secretary of State, Condoleezza Rice, proclaimed: “Everyone empathizes with what the Israelis are doing, but it cannot be Gaza only.”56

President Obama emerged quickly as the most anti-Israel president in U.S. history. His very first television interview was granted shortly after his inauguration to the Muslim network, Al Arabiya.57

He followed this up by dashing off to Egypt in June of 2009 to Cairo to give his famous apology speech to the Muslim nations of the Middle East.58 In that speech he started developing one of his major lines of thought concerning Israel — namely, that the experience of the Jews in the Holocaust is the moral equivalent of what the Palestinians are experiencing under Israeli “occupation.”

A month later, in July 2009, Obama announced that the time had come for “daylight” between the United States and Israel.59

In March of 2010, Obama met with Prime Minister Netanyahu at the White House. The Israeli prime minister was ushered in a side door like a secret mistress and treated with disdain. No press or photos were allowed.60

Obama demanded Israel’s withdrawal from Jewish settlements, and when Netanyahu balked, the president said it was time for him to eat with his family — at which point he walked out and left the prime minister and his aides alone, offering them no food or drink.

In May of 2011 the president went on national TV to demand that Israel return to the suicidal borders that existed before the Six Day War in 1967.61

In March of 2014, the spokesperson for the State Department, Jen Psaki, announced that the Obama Administration no longer considered it necessary for the Palestinians to recognize the existence of the State of Israel!62

Throughout his administration, Obama has continued to condemn Israel’s settlements as being “illegitimate,”63 and he has continued to provide the Palestinian Authority with over $600 million in aid each year.64

But then what more could we expect from a President who proclaimed to the United Nations in a speech delivered in September of 2012: “The future must not belong to those who slander the prophet of Islam.”65

As you can see, the record of U.S. relations with Israel has been erratic from the start.

Even President Truman, who offered immediate recognition, decided to slap an arms embargo on the fledgling nation.

Since that time, we have often treated the Jewish nation with disdain, forcing its leaders to do whatever we desired through the manipulation of foreign aid and through threats of one kind or another.

And, the Israeli government has had little choice but to conform to our demands. That’s because the stark reality is that our veto in the UN Security Council is the only thing that prevents the world from placing draconian sanctions on Israel that would destroy the nation’s economy in short order.

Overall, I would say that until Obama, the Democrat Presidents have been much more favorable to Israel than have the Republicans.

In recent years, since the early 1990s, we have become increasingly hostile to Israel as we have literally forced them to take the self-defeating path of appeasement. Additionally, year after year, we have insulted the people of Israel by refusing to recognize Jerusalem as their capital.

Think for a moment about what an incredible insult this is to the Jewish people. It is equivalent to the Israelis declaring that they do not recognize Washington, DC as our capital, and then proceeding to place their Embassy in Chicago.

Yet, despite our checkered record of support, we have been Israel’s best friend. They have been the largest cumulative recipient of U.S. foreign assistance since World War II. To date, the United States has provided Israel with $121 billion in aid, almost all of it in the form of military assistance.66

But the handwriting is on the wall. The days of American support are numbered. The time has come for the Israeli leadership to face up to the fact that its hope and trust needs to be placed in Almighty God and not in the United States.

In like manner, the time has come for our nation to realize that in our manhandling of Israel, we are courting the wrath of God.

In the fifth and final part of this series on the historical relations between the USA and Israel, we’ll get some biblical insights into these relations and Satan’s goals will be revealed.

58) The White House, “Remarks by the President on a New Beginning, Cairo University, June 4, 2009,” www.whitehouse.gov/the_press_office/remarks-by-the-President-at-Cairo-University-6-04-09.

62) Breitbart, “State Dept.: Palestinians Do Not Need to Recognize Israel as Jewish State,” by Joel B. Pollak, www.breitbart.com/Big-Peace/2014/03/09/State-Dept-Palestinians-Do-Not-Need-to-Recognize-Israel-as-Jewish-State.

65) The White House, Office of the Press Secretary, “Remarks by the President to the UN General Assembly.” September 25, 2012, www.whitehouse.gov/the-press-office/2012/09/25/remarks-president-un-general-assembly, page 5.