Franklin Graham: A Modern Day Daniel in the Lion’s Den 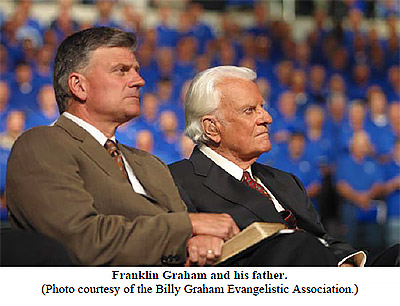 In 1991 an outstanding academic biography of Billy Graham was published. It was titled, A Prophet With Honor.1 The author, Dr. William Martin, was at that time a professor at Rice University where he specialized in the sociology of religion.

I knew Dr. Martin personally since we had been students together at Harvard University in the early 1960s. As soon as the book was published, I called him and asked, “Why in the world did you title the book, A Prophet With Honor? You know as well as I do that Billy Graham was anything but a prophet!”

Dr. Martin laughed and responded, “Yes, Dave, I realize that, but in like manner, you know as well as I do that publishers demand absolute control over a book’s cover and its title.” He went on to explain that he had engaged in a wrestling match with the publisher over the title, but had lost.

A Difference in Styles and Callings

Billy Graham was a very gifted and effective evangelist, but he certainly was no prophet. He sought the favor of politicians, he feared offending anyone, and he had “an obsessive need for approval.”2 His son, Franklin, has summed it up this way: “Daddy hates to say no. I can say no.”3

In stark contrast, Franklin could care less about currying the favor of politicians, he refuses to tip-toe through the tulips with regard to controversial issues, and he seeks no one’s approval except the Lord’s. “I’ve never really been one to try to be politically correct,” Franklin has stated. “I just feel truth is truth, and sometimes I probably offend some people.”4

Well, as we shall see, there is no “probably” about it. Franklin drives his critics crazy with his refusal to compromise on the issues, and as a result, he is the focus of unrelenting attacks. Take, for example the headline of a Huffington Post article dated March 6, 2015: “Franklin Graham is Still the Worst Thing to Happen to God in a While.”5 The author of the article proclaimed, “God has a tough time living down Franklin Graham’s narrow bigotry.”6

Franklin is not a chip off the old block. His focus and style are radically different from his father’s. Franklin has commented about their differences several times in public. He has pointed out that he has received criticism from both Christian leaders and staff members that could be summed up with the words, “Your father would never have said that or taken that position in public.”7

Franklin normally responds to such observations by pointing out that his father ministered in a Christian nation whereas he is ministering in the midst of a nation that is jettisoning its Christian heritage.8

That observation is legitimate, but it does not explain the major differences in their ministries. Those differences are rooted in their gifting by the Holy Spirit. Billy was gifted as an evangelist, and he used that gift mightily to proclaim the Gospel to more people than any other evangelist who has ever lived. Franklin, on the other hand, has been gifted prophetically, and he is thus more concerned with speaking out against the evils of society and calling people to repentance.

The spiritual gift of prophecy can be manifested in three ways:

Franklin Graham excels in the third category, and like his father who preached the Gospel boldly and without compromise, Franklin speaks out fearlessly on all the social and moral issues of our time.

In the process, he has emerged as one of America’s most significant prophetic voices, calling this nation to repentance and warning of God’s judgment if we fail to repent.

In sermon after sermon, Franklin has made it clear that he believes America is a nation in revolt against the very One who has blessed it so abundantly. As evidence of the rebellion, he has pointed to the sexual revolution of the 1960s which he says, “left behind a shattered moral landscape that has undermined the fabric and foundation of our nation.”9 He argues that the so-called “freedoms” promised by the sexual revolution have resulted instead in “increasing slavery and captivity to sin.”10

While commenting on the demands of the LGBT advocacy groups, Franklin presented a sweeping summary of the cultural war that is being waged in America today:11

This is a full-scale assault against Christianity and the followers of Christ. When prayer is banned from the public square; when our President fails to defend biblically defined marriage, and he openly and zealously advocates for gay rights; when legislators rush to overrule existing laws to promote gay marriage; when schools and courts consistently suppress religious freedoms; we know we are locked in a war against the Christian faith, not culture. The architect behind this offensive is none other than Satan himself. The Scripture says that the devil, our archenemy is bent on as much destruction as possible.

Bemoaning the tidal wave of immorality that has swept across our nation since the 1960s, Franklin writes, “There is virtually no place where its corrosive influence is not felt… Today, what our society seems to value most is the freedom to do whatever makes us feel good.”12 He then observed that anyone who would try to stop Americans from doing destructive things to themselves “is mocked and vilified.”13

To summarize the moral decay of our nation, Franklin presents the following observation: “The moral compass that once guided our nation’s people has been ridiculed and rejected, making sin the national sport and pastime.”14

In the second part of my analysis of Franklin Graham as a modern-day Daniel, we’ll see what he addresses as the main source of America’s moral decay.

5) Derek Penwell, “Franklin Graham is Still the Worst Thing to Happen to God in a While,” The Huffington Post, 03/05/2015, www.huffingtonpost.com/derek-penwell/franklin-graham-obama_ b_6809080.html.