Franklin Graham: On the Sources of Our Problems 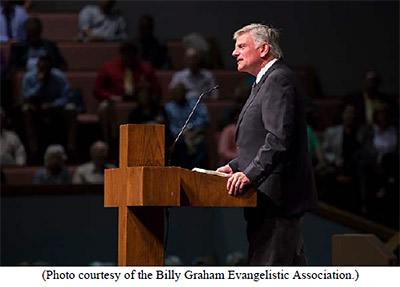 Franklin Graham puts much of the blame for America’s wretched spiritual condition on “sinful entertainment” that “deposits rubbish in the mind, giving Satan a foothold in our lives.”15 Referring to Hollywood as “Follywood,” he laments the fact that “we are willing to spend our hard-earned money on… films that instill in us the opposite of what the Bible commands.”16

And with regard to television, Franklin asks, “Why do we welcome into our homes the flaunting of sin that glorifies the flesh and curses the Name of Jesus, while on Sundays we glorify Him at church?”17 Franklin has stated that when he was a boy, the most risque thing he remembers seeing on TV was Miss Kitty on Gunsmoke.18 But in contrast, “Now even watching the advertisements on television or viewing the trailers for movies is enough to make you blush.”19

Franklin reserves his most stinging rebuke for what he considers to be the fundamental source of our national spiritual morass — namely, silent pulpits. In May of 2014 he delivered a powerful condemnation of Evangelical pastors and challenged them to rise up and start speaking out in behalf of righteousness.20

The occasion was a banquet in Washington, D.C. sponsored by the Family Research Council at which Franklin was given the “Watchman on the Wall Award.” He began his remarks by reading Revelation 21:8 where there is a list of eight groups of people who will be consigned to Hell. He pointed out that the very first group mentioned was the “cowardly,” and he then launched into a no-holds-barred condemnation of preachers for their cowardice in failing to speak out about the sins of America.21 He chastised them for evading moral issues for fear of offending someone:22

Christians cannot ignore parts of God’s Word because they are unpopular or cause division. Our commission is to proclaim Christ and all He stands for. This is what the church’s presence in the world is all about. We cannot sincerely proclaim the truth of God’s love while ignoring what He hates, and God hates sin.

He proceeded to point out that just as our nation has drifted from the strict interpretation of the Constitution, so also has the church seriously drifted from taking God at His Word.23 He added, “It is cowardice to excuse sin by claiming [as do many preachers] we have no right to judge what God has already judged.” He referred his audience to the words of Isaiah 51:7,13 which reads: “Listen to Me, you who know righteousness, you people in whose heart is My law: Do not fear the reproach of men, nor be afraid of their insults… You have feared continually every day because of the fury of the oppressor.”

He concluded his remarks with this challenge:24

Let’s overcome cowardice with courage. Let’s be fearless ambassadors of Christ and stand strong for the glory of God our Savior, pulling others from the fire of eternal judgement (Jude 23).

In the third part of my analysis of Franklin Graham as a modern-day Daniel, we’ll see where he stands on various social and moral issues.