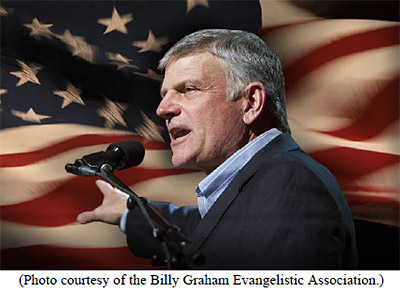 On several occasions, Franklin Graham has boldly stood up to President Obama in public. In May of 2012 when Obama endorsed same-sex marriage, Graham denounced the President by declaring he had “shaken his fist at the same God who created and defined marriage.”39

At the Presidential Prayer Breakfast in February of this year, President Obama came across as defending Islamic acts of barbarity when he made the following observation: “Lest we get on our high horse and think this is unique to some other place, remember that during the Crusades and the Inquisition, people committed terrible deeds in the name of Christ.”40 Franklin’s response was swift and powerful:41

Mr. President, many people in history have used the name of Jesus Christ to accomplish evil things for their own desires. But Jesus taught peace, love and forgiveness. He came to give His life for the sins of mankind, not to take life. Muhammad, on the contrary, was a warrior and killed many innocent people. True followers of Christ emulate Christ — true followers of Muhammad emulate Muhammad.

Calling the Nation to Repentance

Franklin has just announced that he plans to take his message of repentance to the entire nation during 2016 by holding prayer rallies in every state in the union before the presidential election in November. He is calling it The Decision America Tour.42

He says he plans to challenge Americans to:43

Here’s how Franklin has summed up the overall purpose of the rallies:44

The only hope for this country is Almighty God and His Son. We can’t sit idly by any longer. LGBT activists, abortion rights advocates, aggressive atheist groups, and others who ignore God’s Word are trying to shove their agenda down our throats. We need to take every opportunity to speak up for biblical standards and let our lights shine. We need to work to preserve our religious freedoms so that we can continue to proclaim the Gospel freely. If we as Christians stand together and let our voice be heard, I believe God can use us to make a difference. I hope you will start praying with us now.

We need to praise God for this courageous Christian leader. We need to pray for his safety, and we need to pray for the success of his national tour next year. I would urge all of you to get involved in the prayer rally that is scheduled for your state. You can sign up for updates regarding the rally in your state at http://billygraham.org/decision-america-tour.

In the meantime, each of us who profess to be Christians need to be willing to stand up and be counted in behalf of Jesus and God’s Word.

44) Kyle Mantyla, “Franklin Graham To Save America With Right-Wing ‘Prayer Rallies’ In All 50 States Before 2016 Election,” Right Wing Watch, 05/12/2015, www.rightwingwatch.org/content/franklin-graham-save-america-right-wing-prayer-rallies-all-50-states-2016-election.