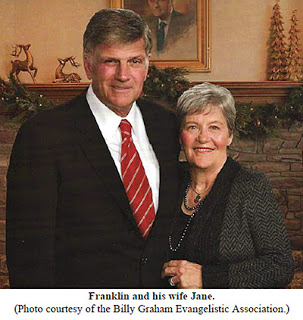 Franklin Graham is not calling the pastors and evangelists of this nation to do something he is not willing to do himself. He has, in fact, become the model of a prophetic voice speaking out boldly against the sins of our nation. In the process he has taken the bull by the horns on many occasions. Consider his comments on the following social and moral issues:

Abortion — “There is no place for compromise on straightforward issues such as abortion… God has given us clear biblical direction that we must follow and obey… As a minister of the Lord Jesus Christ, I believe this is a nonnegotiable issue. Abortion is wrong. It is the murder of unborn children, and no law of the land and no party platform can ever legitimize it.”25

Gun Control — “The gun control proposals now circulating in Washington and in many state capitals don’t address a more important issue — the constant strain of violence put forth by the entertainment industry [in movies, music and video games]. But the problem — the real crux of the issue — lies not in the instruments of violence used… The root of violence is in the evil and depraved heart of man.”26

Islam — “Islam is a religion of hatred. It’s a religion of war.”27 “For Muslims, peace comes only through supmission to Islam. When they speak of peace, they mean supmission to their religion… Worldwide, tens of thousands of men, women and children have been slaughtered in the name of Allah, under the bloody flag of Islam.”28

ISIS — “The evil of ISIS really shouldn’t shock us — it is fully in keeping with their ultimate agenda of hastening a final apocalypse… One thing is for sure — one day every knee will bow and every tongue will confess that Jesus Christ is Lord, to the glory of God the Father.”29

Same-Sex Marriage — “True followers of Jesus Christ… cannot endorse same-sex marriage, regardless of what our President, the Congress, the Supreme Court, the media or the latest Gallup poll says about the matter… This moral issue has been settled by God Himself and is not supject to man-made revisions or modifications. In the end, I would rather be on the wrong side of public opinion than on the wrong side of Almighty God who established the standard of living for the world He created.”31

Homosexuality — “The church is on dangerous ground when it departs from the teaching of Christ and attempts to redefine His commands and compromise His truth. There are many things in Scripture that Christians disagree on, but the Bible is crystal clear about the sanctity of life and marriage. It is also clear that homosexuality is spelled out as sin — there are not ifs, ands or buts.”32

Transgender Restrooms — “[The idea] is not only ridiculous, it’s unsafe. Common sense tells us that this would open the door, literally, to all sorts of serious concerns, including giving sexual predators access to children. It violates every sense of privacy and decency for people of both sexes, adults and children.”33

Secularism — “When the Berlin Wall came down, everybody said we had won… [but then] Secularism came. And Secularism and Communism are the same thing. They’re godless. They’re anti-Christ.”34

Christian Persecution — “Even in America there has recently grown an ugly, anti-Christian bias and intolerance that is changing our nation from the inside out, opening doors for all kinds of discrimination and loss of religious freedom that we hear about daily in the news.”35

Government — “We’re living now in a time where we see the spirit of Antichrist is at the government level.”36 “I have no confidence that any politician or any party is going to turn this country around. The only hope for this country is for men and women of God to take a stand.”37

Fear — “Are we going to be cowards because we’re afraid? Could we get our heads chopped off? We could, maybe one day. So what? Chop it off!”38

In the fourth and last part of my analysis of Franklin Graham as a modern-day Daniel, we’ll see what he plans to do to help bring the United States back to God.

25) Katherine Weber. “Franklin Graham: There is ‘No Compromise’ on Abortion, Gay Marriage,” The Christian Post, 05/18/2012, www.christianpost.com/news/franklin-graham-there-is-nocompromise-on-abortion-gay-marriage-75146.