The Mysterious Role of Islam in the End Times 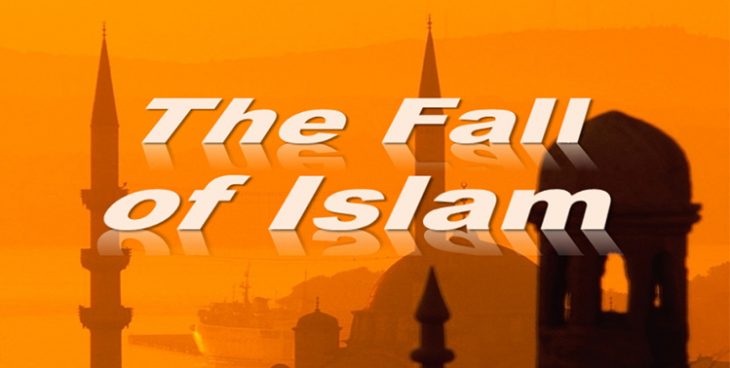 A juggernaut marches across the planet. Fueled by the rage of its fanatical death-cult religious leaders, this seemingly unstoppable force tramples over all that stands before its missile-wielding might. The nations’ defenses crumble as cringing UN leaders shakily bear the ineffectual white-flagged weapons of appeasement. This steamroller force, first forged in the blood of a massacre in the far-off Arabian town of Mecca some 1,400 years ago, has since grown exponentially to become the source of terror for billions of people today. This juggernaut’s ominous name is Islam.

Islam, for all intents and purposes, appears poised to conquer the world. Islam’s growth rate has risen 500% over the last 50 years as their birth rate dwarfs the birth rates of Christians, Hindus, Buddhists, and Jews. Today’s 1.5 billion Muslims make up 22% of the world’s population and control 65 nations. Between the twin strategies of holy war (jihad) and immigration, Muslims are expected to exceed 50% of the world’s population and surpass Christianity as the largest religion by the end of the 21st Century.

The looming threat of Islamic world dominancy has left many students of Bible prophecy to wonder how Islam’s role will play out in the end times. Islam’s role is a mystery, though, for it was founded over 500 years after the Bible was completed, leaving this force unnamed specifically in the prophetic writings. Quite a number of theories have been advanced anyway, from an Islamic Antichrist to the Mystery Babylon one-world religion, but these can only be mere conjecture. Islam then has become one of the great end time mysteries.

Significance to Prophecies Related to the Jews

While Islam might not be named in Bible prophecy, its role can be gauged by its actions which help lead to the fulfillment of well-defined Bible prophecies. Take, for example, the prolific prophecy concerning God’s promise that the Jews will be regathered back into the land of Israel (Isaiah 11:12; Micah 2:12).

It’s no secret that Muslims are taught from the cradle to the grave to hate the Jewish people. The impetus comes from the Hadith, one of Islam’s two holy books along with the Quran. Islam’s founder, Muhammad, left this order skewed by his own particular eschatological view for his followers:

As the nations of the world become more Islamic, Muslim persecution of the Jews increases at a rapid pace. The growing wave of anti-Semitism has forced the Jewish people in increasing numbers to emigrate from their countries of residence to Israel in fulfillment of what God foretold.

Significance to Prophecies Related to the Tribulation

Jesus warned that a time will come when “there shall be great tribulation, such as has not been since the beginning of the world until this time, no, nor ever shall be” (Matthew 24:21). He was referring to an event called the Tribulation, a seven-year time period referred to by the Hebrew prophets as “the great and terrible day of the LORD” and “the time of Jacob’s distress” (Jeremiah 30:7; Daniel 12:1; Joel 2:11,31). It will be “the hour of trial which shall come upon the whole world, to test those who dwell on the earth,” as God’s wrath is poured out on the nations for their exceeding wickedness (Revelation 3:10).

Of the eight prophetic end times wars related to the Tribulation, the first two, if not three, deal directly with lands currently controlled by Islam. Therefore, Islam must play a key role in these end time wars.

The Bible prophesies that God will draw the nations encompassing Israel to their destruction. He will focus His wrath on these nations in a series of battles from the Psalm 83 War, to the Gog-Magog War of Ezekiel 38-39, to the setting up of the Antichrist’s kingdom which shockingly destroys one-fourth of the world’s population (Revelation 6). The aftermath of these three wars can only result in the Islamic world having been annihilated at the onset of the Tribulation. God’s wrath upon the Islamic world for their hatred of Israel — the “apple of His eye” — will be fulfilled (Zechariah 2:8).

Significance to Prophecies Related to the Antichrist

The power vacuum left due to the fall of Islam early in the Tribulation could only contribute to the rise of the Antichrist. Islam would then have one final role to play. Monotheism, which Islam had clung so tightly to, would likely be remembered as a danger to world peace. To rid the world of such fundamentalism, the Antichrist will persecute all religions that hold absolute views. Christian and Jewish monotheism would then be perceived as a direct threat to world peace and the False Prophet’s new one-world religion. Other religions would more easily integrate quickly into that ecumenical faith. Those who don’t surrender to the new world order will be heavily persecuted. Revelation vividly depicts this scenario as Tribulation believers bear first-hand the persecution for their absolute faith in Jesus Christ (Revelation 6:11; 7:9-15).

So, Islam may not have a named role in end time Bible prophecy, but other prophecies peel back the mysterious shroud that is Islam in the end times.