He [Jesus] said to them…”truly I say to you,
if you have faith the size of a mustard seed,
you will say to this mountain, ‘Move from
here to there,’ and it will move; and nothing
will be impossible to you” (Matthew 17:20).

The first book I wrote was titled, Trusting God: Learning to Walk by Faith. It was published in 1987, seven years after I had established Lamb & Lion Ministries. That book is now in its third edition.

My first few years of living by faith were downright scary. Where was my income going to come from? How was I going to pay the rent on the duplex where my family lived? How was I going to afford an office and utilities, much less the equipment or printing or travel expenses the ministry would require?

Many times the Lord took me right down to my last dollar before He met my needs. It was breathtaking, but one good thing is that it kept me on my knees praying without ceasing.

Over the years, the fears subsided as I learned to trust the Lord. I remember in particular one Board meeting where I told the ministry’s trustees that my auto had become worthless, and I needed their permission to get a replacement. One of the trustees asked how I planned to do that, and I said, “By trading in the current car on a new one and setting up monthly payments.” He replied, “This is supposed to be a faith ministry. Let’s just join hands around the table and pray. Let’s give God the first opportunity to meet our need.” And so we prayed.

A couple of weeks later, I announced the need in our monthly newsletter. A few days later a lady in Oklahoma City called and asked what kind of vehicle the ministry needed. I told her a van that would enable us to haul our materials to meetings. She asked how much a van would cost. I told her around $15,000 (this was 1983). She asked if that included tax, title, and license. I said it did not. “How much do you think the total would be?”she asked. I told her I had no idea. She then said, “Well, it shouldn’t come to more than $17,000, so I will put a check in the mail today for that amount.” I was stunned.

I could recount story after story like that one of God intervening in response to prayer to meet the needs of this ministry. And as He did so, I learned to trust Him and turn to Him first, and then sit back and watch in wonder as He would meet my need — usually in a way I did not expect and never could have imagined.

Faith doesn’t happen overnight. It grows as you learn to lean on the Lord.

David Reagan: #Faith doesn't happen overnight. It grows as you learn to lean on the Lord. Click To Tweet

I am a member of a church in McKinney, Texas (a suburb of Dallas) called the Brookhaven Church. The pastor, Glenn Meredith, is a man of vision and faith. He has been the pastor for 36 years. When he had been with the church for 31 years, he felt called of the Lord to move it from north Dallas to a location 25 miles north in the midst of the cities of Frisco and McKinney, which is the fastest growing area in the state.

After the move, the church began meeting in a strip shopping center while trying to raise sufficient funds to construct a new building. In the process, the Lord blessed the congregation with a prime piece of real estate with 650 feet of exposure on one of the main boulevards.

But there was a problem with the site. It had a mountain of dirt at one end that would have to be removed. This enormous pile of dirt was not a natural mound. It was dirt that had been dumped there for years by developers before the area was incorporated into any city.

The mound consisted of 13,000 cubit yards of dirt — and that is a LOT of dirt! A cubit yard of dirt weighs about 2,000 pounds — almost a ton. The average pickup truck will hold about a ton. It would take one laborer a full day to load a pickup truck using a hand shovel, then drive to the unloading point and shovel out the dirt.

If a worker were to do one load a day for seven days a week, 365 days a year, it would take him 35 years to move all the dirt! If he took off weekends, holidays and vacation days, it would take him 52 years. Again, that’s a lot of dirt!

The church got an estimate for having the dirt removed, and it came to $175,000!

A Call to Prayer

Pastor Meredith asked the congregation to start praying, and we did. One Sunday after the morning service, I drove to the site, got out of my car, walked to the foot of the mound and read Matthew 17:20 aloud. Then I prayed the Lord would move the mountain.

A sign was placed at the site that read, “Free Dirt.” There was little response. A year later the mountain was still there. Finally, in August 2017, we were notified by the construction company that was putting up our new building that the mound had to be gone within two weeks. We increased our prayers. Then, with one week to go, two developers called and said they wanted the dirt. They were told, “first come, first served.”

Both showed up at the same time with high powered excavators. They started at each end of the mound and worked toward each other, and in one week’s time they had hauled off almost 1,000 loads using huge semi-trailer trucks!

And the congregation said, “WOW!” And they added, “PRAISE THE LORD.” Pastor Meredith explained that “obstacles are opportunities for God to show Himself strong in our behalf, bringing glory to Himself.”

Glenn Meredith: Obstacles are opportunities for #God to show Himself strong in our behalf, bringing glory to Himself. Click To Tweet

Sooner or later all of us face mountains in our lives. It may be a midnight phone call from the police telling you they have one of your children in custody. Or a doctor looks you in the eye and says, “I am so sorry to have to tell you that it’s cancer.” It could be a business failure or the loss of a job. Perhaps it is a stock market crash or a spouse who says, “I no longer love you.”

How are you prepared to respond? Using your money? Your education? Your contacts? Your ingenuity? Will God be your last thought when all else fails? Or will you turn to Him first with childlike faith?

God is a gentleman. He is also very patient. If you decide to personally handle your mountain, He will let you. He is not going to force His will upon you.

One of the most common questions Jesus asked people was, “What do you want me to do for you?” He asked that of a blind man who called out to Him as He was walking by. Jesus knew the man was blind, but Jesus wanted him to reach out in faith. The blind man responded, “Lord, I want to regain my sight!”

He could have asked for a dog or a companion to guide him, but no, he cried out for Jesus to heal his sight. Jesus responded, “Your faith has made you well.” And the Scriptures say that the man “immediately regained his sight, and began following Him, glorifying God; and when all the people saw it, they gave praise to God” (Luke 18:35-43).

I urge you to start trusting God with the mountains in your life. He is more than willing to help you, but He is waiting for you to humble yourself and reach out to Him in faith. Isaiah 26:4 says, “Trust in the LORD forever, for in God the LORD, we have an everlasting Rock.”

David Reagan: I urge you to start trusting #God with the mountains in your life. He is more than willing to help you, but He is waiting for you to humble yourself and reach out to Him in #faith. Click To Tweet

I am reminded of the words of the great gospel song, “Stand Still” —

When the storm around you rages,
And you’re tossed to and fro,
When you’re faced with life’s decisions,
Not sure which way to go,
Stand still and let God move.

Standing still is hard to do.
When you feel you have reached the end,
He’ll make a way for you.
Stand still and let God move.

Dr. David Reagan’s personal journey of faith. Read the story of this man’s conflict with God and what he learned during that struggle about living by faith.

The book runs a total of 333 pages. It sells for $20, including the cost of shipping. You can order online through our website or dowload the Kindle e-book ON SALE for $3.99 (thru December 31)! 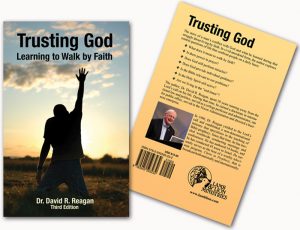 Lift Up Your Eyes

Cat’s in the Cradle