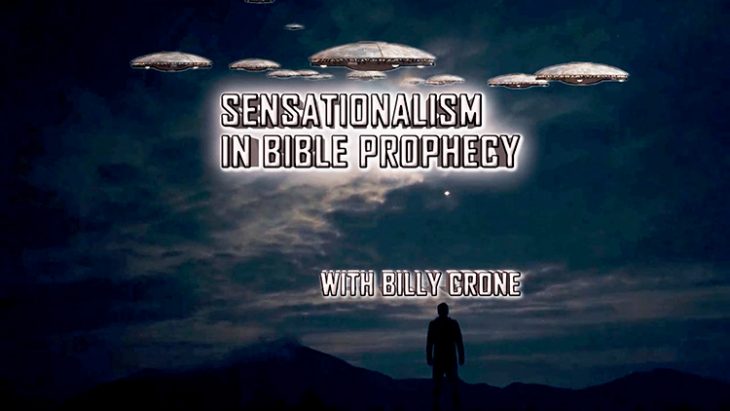 Many people in the field of Bible prophecy are spending a lot of time these days talking about two rather sensationalist topics, namely UFOs and Nephilim. Are these just about sensationalism, or do these topics deserve legitimate consideration?

Another one of the best-known names in prophecy wrote a whole book about Y2K and how it was going to make an impact and result in the rise of the Antichrist. He had a list of a hundred items that would be ruined on the day of Y2K, with one of them being the toaster. I remember thinking, “My toaster doesn’t care what day it is! My toaster doesn’t have any concern about that at all.” But, that was the kind of nonsense that was going on.

I’ve gotten so many requests over the years to discuss sensationalist Bible prophecy that in 1998 I sat down and did a lot of research and wrote a major article about Y2K in which I concluded: “Number one, Y2K has no prophetic significance, and number two, it is not going to impact society.” The next year, in 1999, a guy calls me from Tyler, Texas, and says, “I’m putting together a big conference on Y2K and I want you to be one of the speakers.” I replied, “Do you know my position?” He asked, “What?” I said, “Y2K has no prophetic significance and it is not going to have any impact.” There was a long pause, until he finally said, “I think we’ll get another speaker.” He wanted something sensational.

Billy Crone: It’s bad enough, like you said, that pastors don’t want to teach Bible prophecy. Which again, I’m sorry, you’re looking for an excuse, because as a pastor, and I am one so I’ll say this, I’m sorry, you’re a hireling. You are deliberately saying to your congregation, “I love you as a shepherd, as a church, and I love you so much that I’m deliberately going to skip over one-third of the Bible.” I don’t know how you can do that! I just don’t know.

But again, what is unfortunate, is that sensationalism just gives pastors yet another excuse, albeit false, to say, “Oh, see, nothing happened. That’s why I shouldn’t teach Bible prophecy.” That’s so unfortunate! It’s still no excuse, but it is unfortunate.

You mentioned Y2K. Boy! That hysteria sure didn’t help anything. And, not just for the pastors, but what a terrible witness. How many times did these guys come up with the Blood Moons and all this other nonsensical stuff? They’d claim that they actually knew where the Lord was going to return, and when the Rapture of the Church will happen, even though we cannot know the day nor the hour. The Scripture is so plain about that. I don’t care how many math degrees you’ve got. I don’t care how long you’ve been staring at that star chart. You are just not going to know! I don’t care how many calculators you own; nobody is going to know.

The tragic result? The Lost scoff at Christianity. It’s like the unfortunate eschatological boy who cried wolf. The Lost wonder how many times we Christians are going to say this or that prediction that will never come true.

Dr. Reagan: We have so many people out there who are trying to identify the Antichrist, as if he is hiding under every rock. Anybody they don’t like they label as the Antichrist.

Billy Crone: Yes, well, that one is another hot topic. I remember in Bible college some theorized that Ronald Reagan was the Antichrist. Why? Because, Ronald Wilson Reagan’s name added up to 6-6-6, if you count up the letters. It’s like, come on!

Nathan Jones: Billy, people all the time write in to Lamb & Lion Ministries claiming the Bible just isn’t enough for them. They’re like, “I know everything there is to know about Bible prophecy, so I need more.” We get that criticism a lot. Do we really need more than the Bible?

Billy Crone: When somebody says that, they are actually discounting the Bible. The Bible has everything we need for life and godliness right there. So, no, you don’t need more. Everything you need is right there in the Bible.

Billy Crone: The #Bible has everything we need for life and godliness right there. So, no, you don't need more. Everything you need is right there in the Bible. Click To Tweet

Dr. Reagan: I even had a guy one time write to me and criticize, “The problem with your ministry is that it is boring because you don’t cover anything sensational.” I wrote him back and countered, “I can’t think of anything more sensational than the promises that God has made about the future.”

In the second part of our look at sensationalist Bible prophecy, Billy Crone will identify the evil lurking behind the UFO and alien phenomenon.