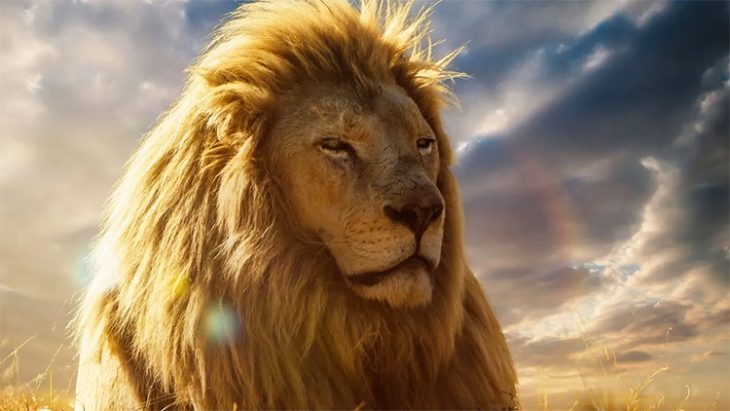 Christians realize that God’s Word refers to Jesus in a variety of poetic ways. He is called the Rose of Sharon and the Lily of the valley (Song of Solomon 2:1), the bright and morning Star, (Revelation 22:16), the righteous Branch of David (Jeremiah 23:5 and 33:15), and the Lion of the tribe of Judah (Revelation 5:5).

With regard to Jesus as the Lion of Judah, that refers to a prophetic blessing bestowed on Judah by his father Jacob, or Israel. In Genesis 49:8-10, He said,

“As for you, Judah, your brothers shall praise you; your hand shall be on the neck of your enemies; your father’s sons shall bow down to you. Judah is a lion’s cub; from the prey, my son, you have gone up. He crouches, he lies down as a lion, and as a lion, who dares to stir him up? The scepter shall not depart from Judah, nor the ruler’s staff from between his feet, until Shiloh comes, and to him shall be the obedience of the peoples.”

The word Shiloh has a dual meaning. It can be translated “he whose it is” or “whose is the kingdom.” It is also understood to be a formal name pointing to the Messiah and the peace or tranquility He will provide.

Jacob went on to describe the royal color — deep red or purple. These references explain why many royal houses consider the lion their representative animal and purple their royal color.

Satan as the Counterfeit

Casual readers of Scripture might be confused by the similar language used to describe Satan, who is also called the star of the morning (Isaiah 14:12) and a roaring lion (1 Peter 5:8). But the context in each case conveys the nature of the attribute being highlighted.

Satan would love to usurp Jesus and lay claim to His royal titles. That is why he appears as an angel of light and why he will someday indwell the Antichrist.

The Bible warns that he is cunning and deceitful, advising us to be wary because he does disguise himself so well. But, whereas Jesus’ appearance is glorious and permanent, Satan’s lesser glory is superficial and fading. And, while Jesus is called a lion to highlight his strength and regal nature, Peter makes it clear that Satan only prowls about seeking someone to devour (2 Peter 5:8).

Since the Bible refers to those of us who follow Jesus — our Good Shepherd — as sheep, Peter’s warning is especially important. Isolated from the flock and wandered away from the Shepherd, we make for easy prey.

Jesus told us to “beware of the false prophets, who come to you in sheep’s clothing, but inwardly are ravenous wolves” (Matthew 7:15). He said that we will know them by their fruits (Matthew 7:16). John also advised us to be wary of the false prophets and spirit of the antichrist. Then he encouraged us by assuring, “you are from God, little children, and have overcome them; because greater is He who is in you than he who is in the world” (1 John 4:4).

Paul said that at his first defense only the Lord stood with him and strengthened him. He testified, “I was rescued out of the lion’s mouth” (2 Tim. 4:17). Likewise, he reminded Timothy, “God has not given us a spirit of timidity, but of power and love and discipline” (2 Tim. 1:7).

As the Pevensie children learned in C.S. Lewis’ The Lion, The Witch and the Wardrobe, Aslan (the majestic lion who represented Christ) was powerful enough to defeat death itself. In the real world, no witch or devil or ravenous wolf or prowling beast can stand against the LORD’s Anointed. Greater is He!

So, since we are sheep led by the Lion of Judah, we will overcome the demonic hordes. Regardless of what lies ahead, let’s echo Paul’s aspiration: “…reaching forward to what lies ahead, [let’s] press on toward the goal for the prize of the upward call of God in Christ Jesus” (Philippians 3:13-14).