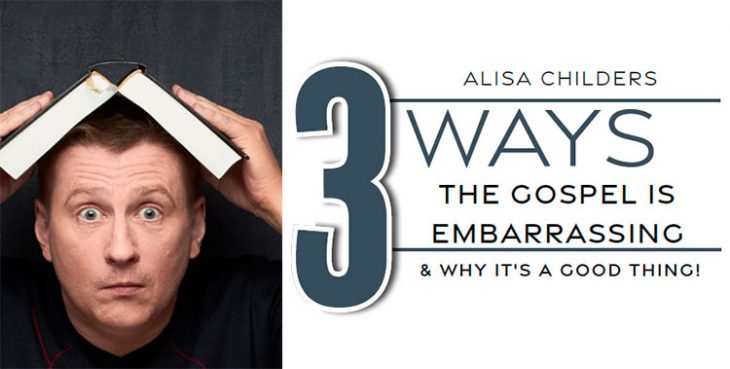 [Editor’s Comments: Our guest contributor, Alisa Childers, is a former Christian music recording artist, lifelong Christian, and writer of apologetics, theology, and culture. She tackles the tough questions about the truth of Christianity and the Bible. For more information, visit alisachilders.com.]

The Gospel accounts found in the New Testament are embarrassing. Matthew, Mark, Luke, and John included some pretty uncomfortable details in their writings. But if you’re a Christian, that’s actually a really good thing.

We humans have a tendency to paint ourselves in a good light — to leave out the bad stuff and exaggerate or embellish the good. If you need proof of this, click over to Facebook and check your newsfeed. You will be bombarded by photos of your friends vacationing at the beach, having ice cream with their children, drinking artisan coffee, and eating mouth-watering delicacies at the new local Bistro. You will read a wife’s birthday tribute to her husband that would convince the most skeptical rationalist that she is married to Superman himself. In short, Facebook is a highlight reel.

That’s not necessarily a bad thing — no one wants to scroll through Facebook and see everyone’s dirty laundry.

But Facebook isn’t exactly an accurate portrayal of history.

When assessing historical documents, there are certain attributes of authenticity that historians are looking for. One of those attributes is called the “Criterion of Embarrassment.” If an author includes details that might be embarrassing to himself or his cause, there is a much greater chance that he is telling the truth. This gives scholars more confidence in the historical reliability of the document.

What about the New Testament gospel accounts? Here are three ways the Gospels are embarrassing, and why those “embarrassing details” actually demonstrate that the authors were telling the truth:

1. Embarrassing Details About Themselves

Let’s say I wanted to make up a brand new religion that wasn’t true, but I was hoping to gain money, power, fame — or all three. If that were the case, I would NOT portray myself as a dim-witted coward who was always getting scolded by my spiritual leader!

But that’s exactly what the writers of the New Testament did.

If they were making the whole thing up, they would have most likely portrayed themselves in a much better light. Here are some of the ways they describe themselves:

Now back to that “made up” religion. If I was basing my newly invented religion on a spiritual leader such as Jesus, I would make sure that he came off in the best possible light. I would portray him as being respected and admired by all… especially by the most powerful and influential social and political elite.

But that’s not what the writers of the New Testament did.

In fact, they recorded details about Jesus in which he was thought to be morally questionable and even a little crazy:

3. Difficult and Demanding Sayings of Jesus

If I were inventing a guru-type spiritual leader, I would definitely NOT make Him difficult to follow. I would make His sayings emotionally pleasing, welcoming, and all-inclusive. After all, if I was making the whole thing up, I would want as many people as possible to join my movement. I would make sure that no one felt excluded!

But that’s not what the writers of the New Testament did.

Here are some of the difficult things Jesus said:

If the gospel writers were just fabricating the events of Jesus’ life in an effort to gain followers for their new religious movement, they were not off to a very good start! The truth is that no one would make this stuff up. Their tendency would be to simplify, unify, clarify, and beautify Jesus’ sayings and character — to make Christianity much more simple, broad, easy, and pleasant.

That is, if their motive was anything but telling the truth.

But they were telling the truth. They recorded what they saw: the good, the bad, and the ugly. The Criterion of Embarrassment is just one of the principles scholars use to authenticate historical documents, and the Gospels pass with flying colors.

Are the Gospels embarrassing? Yes, and that’s a good thing!