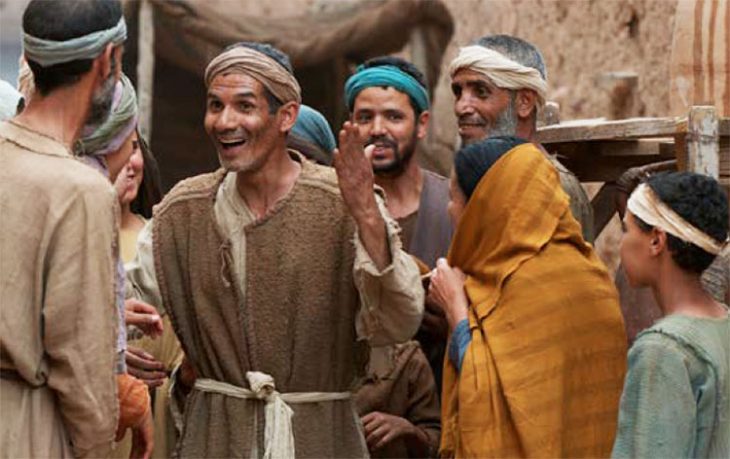 [Note: Our guest contributing author, John Salom, is a commercial airline pilot who participated in Lamb & Lion Ministries’ May 2022 Israel pilgrimage. He is an avid Bible student, teacher, and writer.]

I first had the privilege of stepping foot in the land of Israel in 2008 as an airline pilot sent on an ad hoc charter to Tel Aviv’s Ben Gurion International Airport.

At the time, I knew very little about the modern State of Israel, much less the prophetic significance of its very existence. I was simply excited to be in the land where so many Bible stories that I had known my whole life had taken place.

Upon landing, I performed my duty as a Captain and checked in with our crew scheduling department to determine our next flight assignment. You can imagine my delight to hear that another one of our planes would not be passing through Israel for another eight days!

“Hang tight, John, and enjoy some hummus and shawarma,” I heard on the other end of the line, “you’re going to be there for at least a week.”

So, after checking in to the Renaissance Hotel right on the Mediterranean’s shores, I began to concoct a plan for my crew. I was determined to take advantage of this incredible gift that had just fallen into our laps. We were on the clock at work and had just been told that there was nowhere for us to go. Translation: we were on a paid vacation in Israel!

That night, we took a cab to the old town of Joppa. As we sat down to a wonderful meal on this cool June evening, we marveled at the beautiful view and the shoreline that stretched out before us. It never occurred to me as I watched the twinkling lights of Tel Aviv reflecting off the waves of the Med, that this was the very port where Jonah had begun his ill-fated journey to Tarshish. I had no idea that we were also just blocks away from the location of Simon the Tanner’s house on whose rooftop Peter had once had the vision of a sheet being brought down from heaven.

Over the next week, I finally devised an affordable-enough plan for us to go and see the Holy City, Jerusalem. For a mere $3.00, I convinced my crew to board an early morning bus in Tel Aviv that would transverse the center of the country on Highway 1, going from West to East (both literally and metaphorically). As we boarded the bus, we quickly began to feel just how out of place we were.

Sitting right in front of me was a girl who couldn’t have been much older than 17 with an Uzi submachine gun strapped to her back, having just recently begun her service in the IAF as all young people of this nation were required to do. Everyone on the bus was “packing heat,” as they say, everyone except for me, my First Officer, and my Flight Engineer.

We eventually arrived in the newer part of Jerusalem, and from there, we caught another bus that would take us over to the old part of the city.

We took our spots on the front row of seats as the entire bus filled up with Orthodox and Hasidic Jews headed for the Western Wall. They sat staring at these silly Westerners, wondering how we had managed to find ourselves on their bus. The whole experience was quite humorous, and it was painfully clear to all that we had no idea what we were doing.

Minutes later, I found myself standing before the famed Western Wall. Over the course of the next few hours, we climbed up the old outer walls of the city and walked atop them, made our way to David’s tomb and clumsily darted about Jerusalem, completely unaware of what we were looking at.

Eventually, our walkabout landed us at the Garden of Gethsemane. As I peered into the garden through an iron gate, I did my best to hold back the tears, a flood of emotion sweeping over me. I didn’t want my crew to see their Captain crying. We ended the day at the summit of the Mount of Olives, which afforded us spectacular views of Old Jerusalem. Finally, we worked our way back toward the shores of the Mediterranean, returning to our hotel in Tel Aviv. That night I lay in bed with tears streaming down my cheeks, as emotional as I had ever been, recalling all the day’s events. It would be 14 years before I would ever see Jerusalem again.

Fast forward to May 14, 2022 (a date of prophetic significance, no less exactly 74 years after Israel had become a nation in a day). How much the world had changed in just under a decade and a half; but more importantly, how much this man had changed in as many years! The Lord had done a profound work in my life, and on this day, a very different man once again touched down on the tarmac of Ben Gurion Airport.

My worldview was vastly different than when my first visit to the Promised Land had taken place; a worldview that was about to evolve even further. Having gained much more advanced knowledge of Scripture and a vastly improved understanding of Bible prophecy, this visit would allow me to see Israel through entirely different eyes. Not only had my grasp of Scripture dramatically improved over the years, but I would join a group of pilgrims on a pilgrimage led by a dynamic team of two highly-knowledgeable men on this visit.

This time, it was Lamb and Lion’s own Tim Moore who would be at the helm, and he wonderfully expounded on modern and ancient Jewish history at each site throughout the Holy Land. At his side, our Messianic Jewish tour guide, Erez Bar-David, stood at the ready to offer his own meticulous expertise.

It is one thing to read through and meditate on Scripture, flexing the muscles of our imaginations to attempt to grasp what once took place or is even now taking place. It is quite another to witness firsthand those locations where the events of Scripture once played out and are still playing out even today! To be able to peer for a moment through a 1st Century looking glass with 21st Century eyes does not merely change one’s worldview; it is an earth-shaking game changer that can build your faith in ways you had never imagined before.

Looking back into Bible history by literally walking in the footsteps of Jesus can be described as nothing less than utterly life-altering. My career over the years has taken me to six different continents and nearly 90 different countries, and at last count, I have managed to circumnavigate the globe some 300 times in my life.

Arising just before dawn one morning, I snuck out of my room in Tiberias and found my way down to the shores of the Sea of Galilee. I listened as the birds sang songs to their God, who daily provides for them and was given a most unique gift, as I watched the sun rise over the Golan Heights, casting a golden shadow onto the waters upon which Jesus had once walked. In all my travels, I have never encountered a moment quite like that one.

What can one call an experience for a believer who walks through the ancient cities of Magdela or Chorazin or Capernaum? How does a Christian process that moment when he stands before the Garden Tomb or bows his head and places his hand on the Western Wall in prayer? What are we to do with a private moment in the Garden of Gethsemane, where under the shade of an olive tree, we are allowed to “watch and pray”?

These experiences are not something we can fully grasp on an intellectual level but are best processed with the help of the Holy Spirit, who is able to open the eyes of our hearts. A land once described by the famous American author Mark Twain as “a hopeless, dreary, heartbroken land” has today become precisely what the prophet Ezekiel long ago foretold:

So they will say, “This land that was desolate has become like the garden of Eden; and the wasted, desolate, and ruined cities are now fortified and inhabited.” (Ezekiel 36:35)

Today’s pilgrim can peruse the pages of the past and see the fulfillment of Deuteronomy’s curse. Moreover, they can bear witness to God’s promise through His holy prophets that a day would come when He would once again regather His people (in unbelief) back to the land of their fathers, for His Name’s sake.

The words of Paul in his epistle to the Romans pierce the heart while standing at the Western Wall and observing the Orthodox Jew in his prayers, “For I bear them witness that they have a zeal for God, but not according to knowledge” (Romans 10:2).

It’s enough to make the stoutest heart crumble, knowing that “blindness in part has happened to Israel.” I can only pray for the Day to be hastened when that tree I have been grafted into is again wholly restored!

A pilgrimage to Israel does not alter one’s worldview; instead, in the context of Scripture, it helps one to see a glorious glimpse into God’s worldview. I only wish that every true Bible-believing Christian could have such a blessed experience. Perhaps our gracious God will bestow you with such a blessing in the future. Until then, I will leave you with the words of the Jews of the Diaspora who, for centuries, would shout this phrase at the conclusion of the Passover Seder: “Next year in Jerusalem!”