What Happens When You Die? – The Poll

Decembers’s blog poll, “What happens when you die?,” sought to determine people’s views on what they believe will be their experience just after death. The results of the 867 respondents are in the graph below: 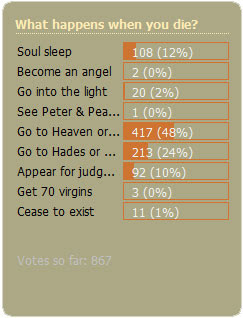 The amazing variety of answers clearly show that people are not very sure of what their final experience will be upon dying, even among Christians sadly.

In talking with those totally lacking a biblical worldview, many express more assuredness (at least publicly) than those who have a biblical worldview of what to expect upon death. It could be that they have a certain confidence in being their own source of authority, though an uninformed authority as they have neither experienced death. Eleven of the respondents believed they would cease to exist after death, a very humanistic response.

Now, for those who have heard or claimed to have experienced a near-death experience, a common description among these experiences was that they felt they were going into a light, sometimes described as warm and loving. Twenty believe this to be the case upon death. What that light is, whether spiritual or biological, has never been determined to be “God,” but rather a force of some type.

Some who have a semblance of “religiosity” believe that people will be transformed into angels upon entering the great beyond. Two responded that this was their future. Jesus was pretty clear people would be like angels, though, and not become angels (Matt. 22:30; Luke 20:36).

Some in the Catholic tradition have been raised to believe that upon death they will appear before Saint Peter and the Pearly Gates to see if their good works will gain them entrance, a children’s tale totally unrecorded in God’s Word. Fortunately, only one responded that this would be their experience. When God’s standard for entrance is perfect holiness (Matt. 5:48), can enough works be done to possibly provide entry?

For those from a Muslim background whose belief derives from their holy book, the Koran, they responded that they would receive 70 virgins upon entering Paradise. Obviously, the three responding were men. Women, though gaining eternal youth, still get the raw deal in death just like in life by becoming eternal sex slaves. The carnal Islamic rendition is a sad and shabby view compared to what the Bible has to teach about eternal life beyond death.

So then, why so many Christian views on the subject? Well, initially, the results show just how poorly the Church has done in teaching people what the Bible has to say about our future beyond this life, even among our own congregations. But secondly, some overlap of after-death experiences may possibly occur.

Over the next few entries, we will explore what the Bible teaches is our experience upon death. After all, Christians have the inside scoop from God Himself — the One who created life, holds the keys to death, and experienced and defeated death itself. You will find great hope that death can be just the beginning of life.