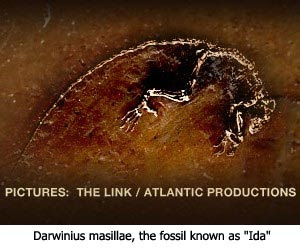 With all the promotional power of a combined summer blockbuster extravaganza including Wolverine, Star Trek, Transformers and Harry Potter, evolutionists have released Ida, the lemur/monkey/pre-man fossil thingy.

Not just a quiet announcement by some paleontologist posting his scientific paper, the fossil called “Ida” was prepped for the full red carpet world release using an impressive media blitz. The fossil was unveiled on Tuesday, May 19, 2009, at a full-blown news conference at the famed American Museum of Natural History in New York City. The fossil can be viewed on its own fully interactive website. Television’s A&E has a two-hour documentary already produced for showing on Memorial Day on the History Channel, later to be release on the BBC in Britain and ZDF in Germany. Ida also received exclusive appearances on “Good Morning America,” “Nightline” and “World News.” And, a book called The Link has already been written and published on the fossil, released the same week as the unveiling with 110,000 copies already shipped. Google even worked the fossil into their logo for a day. The world has been introduced to Ida by full multimedia spectacle.

Why is the world going ape over Ida?

Well, because this fossil is being claimed to be the “missing link” in man’s evolution, finally found since Charles Darwin first published On the Origin of Species by Means of Natural Selection, or the Preservation of Favoured Races in the Struggle for Life 150 years ago. Ida, it’s been touted, proves the Theory of Evolution.

The fossil called “Ida” is scientifically named Darwinius masillae, in honor of Charles Darwin on his 200th birthday. According to Ida’s website, the fossil is “a 47 million year old, perfectly preserved primate recovered from the Messel Pit in Germany. Ida is the most complete early primate fossil ever found, and scientists believe that she could be one of our earliest ancestors. She is a remarkable link between the first primates and modern humans and despite having lived 47 million years ago, her features show striking similarities to our own.”

Long after it’s initial discovery in 1983, Jørn Hurum found the fossil in a private collectors display and paid a small fortune to obtain it. Horum then studied the flattened but 95% preserved fossil for years before coming to the conclusion that the fossil shared the attributes of lemurs and monkeys and therefore, according to evolutionists, man. One scientist named the fossil after his 6-year old daughter, Ida, as the age would be compatible to the 9-month age the creature most likely died at. Ida’s website describes the fossil having “four legs and a long tail, was about the size of a small cat, and had human-like nails instead of claws, along with a bone in her foot that is similar to humans.” What makes the find exceptional to evolutionists is the perceived opposable thumbs on a lemur-like creature.

As Britain’s famed nature television star and champion of evolution Sir David Attenborough proclaimed, “This little creature is going to show us our connection with the rest of the mammals. This is the one that connects us directly with them… Now people can say, ‘OK, we are primates, show us the link.’ The link they would have said up to now is missing — well, it’s no longer missing.”

Does Ida prove that the Theory of Evolution is true, and that mankind evolved from lumur-like monkey creatures?

Ham is alarmed by the massive media blitz proclaiming the fossil as the “missing link,” because few other scientists could also study the fossil to verify the claims, a staple tenet to the Scientific Process. “It’s obviously a lot of media hype to promote an ideology,” Ham told WorldNetDaily.com, reported in their Tuesday, May 19, 2009, article by Drew Zahn titled “Media blitz: ‘We found missing link.'” He stated, “In the wake of a lot of controversies in creation vs. evolution, evolutionists want to be able to announce they have the ultimate proof… It’s obviously a ploy to promote a book and a television special and to indoctrinate the public in evolution by making a lot of statements that are way beyond what the scientists themselves wrote.”

Ham has released six of his own observations of the fossil.

Ham concludes that Ida is nothing more than “a small, tailed, probably tree-climbing, and now extinct primate — from a kind created on Day 6 of Creation Week… Despite the headlines, Ida gives no support to primate (or human) evolution.”

And, what does Ken Ham thinks about all the media hoopla over Ida? “For Attenborough to come out and say, ‘We have the missing link; it’s no longer missing,’ only admits they haven’t had missing links before this time. If evolution is so decided, why would they get all excited about one fossil that they find now, when they claim they’ve had proof of evolution for years?”

The Bible on Ida

No two topics are the most beat up concerning the Bible as the opening and closing books of Genesis and Revelation. To deny the Creation is to claim the Bible isn’t trustworthy as the Word of God. To discredit the Bible is to deny the sovereign plan of God. And, to dispose of Revelation is to say that Jesus will not have His victory.

Many want to buy into Satan’s lie of erasing the very notion of the one true God so that they can live lives apart from God’s moral law. To support their delusion, deniers of the Creation and ultimately God will produce all sorts of “evidence” to support their desire to live apart from Him, which in reality is rebellion against their Creator. 2 Thessalonians 2:9-12 explains how this rebellion works, and how God uses their rebellion against them.

“The coming of the lawless one will be in accordance with the work of Satan displayed in all kinds of counterfeit miracles, signs and wonders, and in every sort of evil that deceives those who are perishing. They perish because they refused to love the truth and so be saved. For this reason God sends them a powerful delusion so that they will believe the lie and so that all will be condemned who have not believed the truth but have delighted in wickedness.”