Your Crown In Heaven 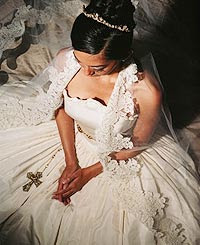 The question of which crown one thinks they’ll receive in Heaven was put to the reader in April’s poll titled “Which crown will you receive in Heaven?” The 581 respondents cast their vote from among a number of varieties of crowns. The results not only showed a wide range of opinions as to what crown each thinks will be bestowed upon them by Jesus Christ in Heaven, but also showed insight into how they feel they are serving the Lord while on Earth.

The results are as follows: 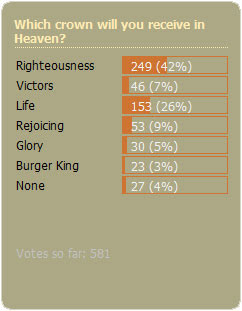 Judgment of the Just

At the time of the Rapture, both the living and dead in Christ will receive their glorified bodies and be taken up to Heaven. While the Tribulation rages across the Earth, the glorified believers in Heaven will face a different kind of judgment — the Judgment of the Just.

This judgment will not terrify the gloried believers, though, because their eternal destiny in Heaven was already secured not from any work they had done, but by the saving work of Jesus Christ and their acceptance of His gracious gift by faith (Eph. 2:8-9; Gal. 2:16; 2 Tim. 1:9). The purpose of this judgment by Jesus is to determine the degree of rewards for how those raptured used their spiritual gifts to advance His kingdom while living on Earth (2 Cor. 5:10; 1 Cor. 3:8-15; Rev. 2:23; 22:12).

How will the works be judged? They will be judged according to quantity, quality and motive (1 Cor. 3:13-15; 4:5). The Lord will bring to light the true value of these good deeds. Some will be surprised at how many deeds were done for selfish reasons and didn’t amount to anything, while others will be surprised how far-reaching their faithful and selfless deeds went. By then end of the Judgment of the Just, the true worth of a person’s life’s work will reveal itself for all of Heaven to see and celebrate.

What kind of rewards does a life of faithful deeds done in the name of Jesus attain?

Some rewards will be immaterial, available to all no matter what the result of the Judgment of the Just. Those saved will live with their Creator in a loving relationship forever in Heaven and on the New Earth.

Also, some of the rewards will relate to degrees of position, as gloried believers will be granted different degrees of ruling authority during the Lord’s millennial reign (Lk. 19:11-27).

Amazingly, some of the rewards will be so wonderful that no one can even image what they’ll be like. As 1 Corinthians 2:9 describes, “No eye has seen, no ear has heard, no mind has conceived what God has prepared for those who love him.”

And, other rewards will be material in nature. For example, special robes that demonstrate the purity and holiness of “the righteous acts of the saints” will adorn those in Heaven (Rev. 6:11; 19:8). And, the Bible describes five different crowns, called in the Greek stephanos, that will be bestowed for meritorious spiritual achievements (2 Cor. 5:10; 1 Cor. 3:10-15). Those crowns will, as 1 Corinthians 9:25 describes, “last forever.”

“Now there is in store for me the crown of righteousness, which the Lord, the righteous Judge, will award to me on that day—and not only to me, but also to all who have longed for his appearing.” – 2 Tim. 4:8

The Crown of Righteousness has a two-fold reason for being awarded. Firstly, those awarded it lived their best according to Matthew 5:48, “Be perfect, therefore, as your heavenly Father is perfect.” Though “all have sinned and fall short of the glory of God” (Rom. 3:23), these people strived to live as blameless and pure a life as they could according to God’s moral law. Because these people knew Jesus could return at any moment, they knew they had to live their lives righteously as they allowed the Holy Spirit to work in them. They didn’t want to be caught in sin and failure, disappointing the Lord upon His return. So, secondly, these people lived with a longing and expectation of Jesus’ imminent return.

Of the 581 respondents to the poll, 249 (42%) believe they live their lives righteously waiting for the Lord to return and so will be awarded the Crown of Righteousness.

“Do you not know that in a race all the runners run, but only one gets the prize? Run in such a way as to get the prize. Everyone who competes in the games goes into strict training. They do it to get a crown that will not last; but we do it to get a crown that will last forever. Therefore I do not run like a man running aimlessly; I do not fight like a man beating the air. No, I beat my body and make it my slave so that after I have preached to others, I myself will not be disqualified for the prize.” – 1 Cor. 9:24-27

Also called the “Imperishable Crown” or the “Incorruptible Crown” or the “Imperishable Wreath,” the Victor’s Crown is for those who are driven to live a life of victory for Jesus. They exercise extreme self-control in disciplining themselves to be as useful and productive for Jesus as they possibly can. Like a great athlete training from the early dawn hours every day, these believers push themselves in Bible study, prayer, and fasting to be at the top of their game. They do this to keep the faith, build their personal relationships with Christ, and be the best equipped to evangelize the world for Him.

Of the 581 respondents to the poll, 46 (7%) believe they live their lives in pursuit of personal spiritual disciplines and so will be awarded the Victor’s Crown.

“Blessed is the man who perseveres under trial, because when he has stood the test, he will receive the crown of life that God has promised to those who love him.” – Jms. 1:12

“Do not be afraid of what you are about to suffer. I tell you, the devil will put some of you in prison to test you, and you will suffer persecution for ten days. Be faithful, even to the point of death, and I will give you the crown of life.” – Rev. 2:10

Also called the “Martyr’s Crown,” the Crown of Life is given to those who persevere under trial, even to the point of death. These believers are the ones who endure abuse for their beliefs, punishment for sharing their faith, and martyrdom for not denying their Lord.

Of the 581 respondents to the poll, 153 (26%) believe they have suffered for their faith in Jesus Christ and so will be awarded the Crown of Life.

“Therefore, my brothers, you whom I love and long for, my joy and crown, that is how you should stand firm in the Lord, dear friends!” – Phil. 4:1

Also called the “Soul Winner’s Crown,” the Crown of Rejoicing will be awarded to those who live out the Great Commission of Acts 1:8 and be Christ’s witness into all the world. Whether it’s planting the seeds of acceptance, seeing one come to salvation, or helping one grow in their faith and witness, these believers seek and sacrifice to bring others to salvation in Jesus Christ.

Of the 581 respondents to the poll, 53 (9%) believe they are diligently working towards bringing people to Jesus Christ and so will be awarded the Crown of Rejoicing.

“And when the Chief Shepherd appears, you will receive the crown of glory that will never fade away.” – 1 Pet. 5:4

The audience of 1 Peter 5 are those who faithfully shepherd other believers, such as elders, pastors, teachers and counselors. These believers follow Christ’s command in John 21:17 to “feed my sheep.” They are spiritual leaders who hold a position of nurturing responsibility over other believers, working to bring about spiritual growth and maturity in those they mentor.

Of the 581 respondents to the poll, 30 (5%) believe they serve in the special role as spiritual leaders and so will be awarded the Crown of Glory.

A Burger King Crown is nothing more than a paper award given free to children with the purchase of a fast food meal. It’s a facsimile of the real thing, and quite useless. To get a Burger King Crown (though none of these will really be handed out in Heaven) is to have accepted Jesus’ salvation in the nick of time before death, or having never lived a life up to one’s full potential, only having “faith without deeds” (Jms. 2:26b). Those receiving no crown at all “himself will be saved, but only as one escaping through the flames” (1 Cor. 3:15).

Those responding to the the final two choices of Burger King Crown were 23 (3%) and those responding to None were 27 (4%). They will have made it into Heaven, but be eternally reminded that they did nothing of worth while on Earth in service to their King.

Don’t get the Burger King Crown! Don’t have nothing to show for your life when you get to the Judgment of the Just. Remember why you were put on this earth. As Ephesians 2:10 wonderfully states our purpose, “For we are God’s workmanship, created in Christ Jesus to do good works, which God prepared in advance for us to do.”

Ultimate Purpose of the Crowns

While the crowns will be given as a reward, eternally displaying the true value of one’s life while on Earth, they have an ultimate purpose.

Revelation 4 presents the reader with a magnificent scene from the very throne room of God. Twenty-four elders, especially awarded believers who are given thrones and honored positions before the very face of God Himself, fall down before God in worship. They remove the crowns from their heads (for more than one crown can be awarded) and place them at the feet of God. The embodiment of their life’s work of holy and righteous sacrifice is used as a tool of worship. Their crowns are given back to God to bring honor and glory to Him. Their crowns before them, they praise God saying:

“You are worthy, our Lord and God,
to receive glory and honor and power,
for you created all things,
and by your will they were created
and have their being.”

Make the embodiment of your life — your crown — an act of worship.