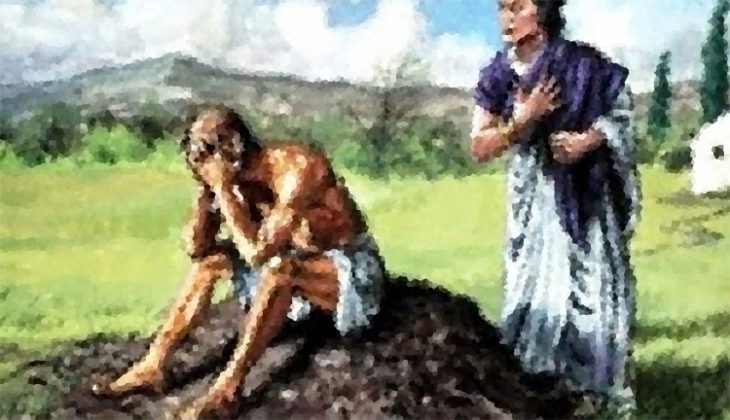 The life of an ancient man named Job and the book written about his experiences have enthralled people for millennia. But, the emphasis that is most often given to the cast of characters hinders students from understanding that the book has more to do with spiritual warfare and the Person of God than anything else. Said another way, we learn more about His love, power, and providence in life’s battles than we learn about human suffering and the misconceived conclusions we often have about it.

We are fortunate to have Job in the canon of Scripture for any number of reasons. It gives us a lot of information regarding what is constantly happening in the spiritual dimension. We become more aware of why things happen the way they do at times. Further, the book of Job offers some very clear teaching regarding the fact that death has really no impact upon eternal human existence.

From Job, we see that Satan is so filled with hatred for God and His creation that he will accuse people in such a way as to call God’s honor into question. From this, we understand that when a person experiences suffering it is not necessarily punishment for a specific sin.

And, what is difficult for many to admit is, that from Job, we see that some of the ancients had a better understanding about the future than most modern Christians have. This is ironic because today we have the completed Bible and the personal indwelling of the Holy Spirit, whereas Job had neither.

Note carefully Job 19:25-27. Though Job lived in a dispensation wherein people were not given detailed information about the future, he knew that at the end of things God will take His rightful place among people on this very earth which, by the way, belongs to Him.

He knew that a time was coming when his living Redeemer will resurrect his long-decayed body, thus giving him a literal set of eyes with which he will not only see Him but will see Him on this earth! Most Christians do not believe this will happen.

That we will be with Jesus on this very earth with the curse removed is simply another amazing aspect of what some of us call the Blessed Hope. Isaiah saw this in more detail and recorded it in chapter 11. It is difficult to imagine how most Christians can’t see this.

Job on Having Joy in Suffering

Job did not know what had happened in the first two chapters of the book. Those things were going on in a dimension completely unseen by him. The only thing he knew was that in a short period of time he lost his business and all his children for no reason he could think of. He was broke and bereaved.

Shortly following that, he was stricken with a disease that covered his body with boils. This might remind us of a severe case of carbuncles, which are clusters of boils caused by a staph or strep infection. Of course, there were no pharmaceutical grade antibiotics in those days, and the only limited relief he had was to scratch the incessant itching with broken pieces of clay pottery. To sit, lie, lean, or stand offered no relief to the intense pain and irritation.

His wife, also broke and childless, in utter frustration and anger told him to “curse God and die.” They had no money to possibly buy some relief, if that were even possible, and no children to take them in to give them even basic levels of care. Maybe the best way to describe the situation for Job and his wife is to use the word “hopeless.”

The three friends who visited him had only one explanation for his condition. They believed that Job had done something really bad to make God so vengeful, and now he was paying the awful price. What a slap in his face! They were accusing him of being a hypocrite whose fake righteousness finally caught up with him.

Job was reduced to a burning fever with constant pain while having nothing and no one; not even the support of his wife. He was in utter misery and all alone.

It is easy to become bogged down with all the dialogue in chapters 3 through 37. But, from chapter 38 to chapter 41, we get to the heart of the issue about God’s glory. I cannot personally offer any explanation about God’s glory that would be more fitting than the one God Himself gave us as He “answered Job out of the whirlwind.”

What Job did not know was that Satan had attacked the integrity of God with accusations concerning the reasons for his faithfulness to Him. God responded and gave permission for Satan to take all of Job’s possessions, including his children, and then to finally take his health. In the process, he even lost the support and encouragement of his wife.

All of God’s creation is for His glory, and that includes 21st Century members of His Church, whether we understand what is going on in the unseen dimension or not. We are magnificent beings created in the image of God for a purpose, and that purpose is outside of ourselves. It all has to do with His glory. Indeed, this is a truth worthy of our careful consideration because it explains a lot about life.

But, there is something else in the story of Job. It is in the form of a gift from God that brings unspeakable joy in the face of wretched sorrow. Read on!

Job on the Impermanence of Death

As a result of Satan’s accusations Job lost his entire ranching operation that consisted of 7,000 sheep, 3,000 camels, 500 yoke of oxen, and 500 female donkeys. But, at the end of this time of testing and suffering, God restored his health, and in the process of restoring his business, He doubled the number of his livestock.

The reason God did not double Job’s second family is that he never really lost his first family. Unlike his livestock, Job still had his original family, even though they had died. At the very moment this is being read, Job and his wife have 20 children with them — 14 sons and 6 daughters.

What does that mean for us? The answer is obvious.

Death temporarily separates Christians from each other, but it is absolutely impossible for death to separate Christians from each other forever. You see, Jesus has taken any such power away from Satan and death (1 Corinthians 15:54ff). That is why Paul, in writing about the rapture in 1 Thessalonians 4:18, could say, “Therefore, comfort one another with these words.”

I believe the overwhelming majority of Christians have already gone into the presence of our Lord through the door of death. And, if Luke 21:28 can be taken to mean what it says, then I believe the return of Jesus for us is imminent.

Regarding physical death, we must never forget that it is merely a narrow threshold over which we cross as we step into eternity with Jesus. It is not a room into which we enter and abide. Further, we know death does not, because it cannot, permanently separate us from the personal presence of our redeemed loves ones.

Don McGee: For Christians, #death is merely a narrow threshold over which we cross as we step into eternity with Jesus. Click To Tweet

This hope is a gift from God that cannot be earned by any effort or bought with any currency. Education, money, prestige, talent, accomplishments — whatever anyone might list — those things are mere refuse in comparison to what God has for us regarding the resurrection of the dead (Philippians 3:7ff).

Interestingly, the word “refuse” in that passage can be defined as “something that is as detestable,” such as animal dung. That ought to help us keep things in perspective!

To paraphrase Phil Robertson about life and death: I don’t know of anyone who can come up with a better deal than what Jesus offers.