A Litmus Test For Governments

How can one know if their government was set up by God in covenant with its people?

In a Christ in Prophecy series titled “America’s Christian Heritage,” Dr. David Reagan interviews a historian who says not all governments are ordained by God.

The Covenantal Basis of American Society

Dr. Reagan: In your book you constantly emphasize what you call “the covenantal basis of American society.” What do you mean by that concept? Why is it important? And, how does it relate to our Christian heritage?

Rev. Marshall: It is the most important element in American history because the nation was founded by Christian men and women who were in covenant with God through faith in Jesus Christ. God is a covenant-making God. What they believed as Reformed Christians from the Calvinist wing of the Protestant Reformation was that if they would build a society based on these biblical principles in covenant with God, to seek to live in obedience to His commands, and to put the love of Christ into practice, thereby they would be creating a society of justice. If you don’t care about your neighbor there is no such thing as justice. So, if they would do that, God would watch out for and protect this nation. I think the history of America amply demonstrates that God has kept His end of the bargain.

Dr. Reagan: Would that be for example the bases of something like the Mayflower Pact?

Rev. Marshall: Absolutely. The Mayflower Compact was this hastily written out one page document creating a new government because the Pilgrims were not going to stay in Massachusetts. They felt by the Lord to stay there, having planned to be under the authority of the Jamestown Colony in Virginia, but the Lord had different plans for them. They weren’t going to be under that authority and so they had to set up a new government. 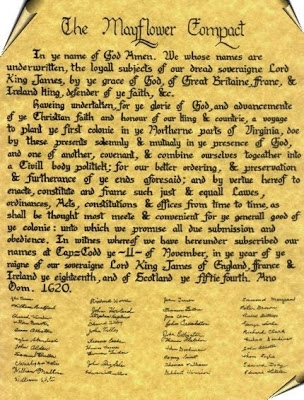 The Pilgrim elders gather in the captain’s cabin to create this one page Mayflower Pact. The first sentence says, “In the name of God amen.” I used to think, “That is kind of boiler plate, pietistic talk from the 1600’s.” No, no wrong! That was a specific formula that was used by Puritans whenever they created covenants or constitutions, and they did this continually by the way. It was an announcement to the reader that what they were about to read was a covenant that had been entered into with God Almighty. In other words, what follows is based on our relationship with God. That is why they open it with “In the name of God amen.”

Dr. Reagan: There is a document that has been circulating on the Internet for sometime now that is very impressive to me because it gives the opening paragraph of every state constitution, and every one of them speaks about a covenantal relationship to God.

Dr. Reagan: You also emphasized in your writings that the only legitimate government is one that is instituted by the consent of the governed.

Rev. Marshall: Yes. The Lord showed me that American government’s authority is in terms of giving our free consent, which is rooted in Scripture. Go back to Exodus 24 with the Children of Israel in the Sinai Wilderness. Moses reads the 10 Commandments of God to them, and then there is a ratification ceremony — a covenant — a sealing into the covenant by blood where Moses takes the blood of the sacrifice and he says, “Here is the Word of God, the Commandments of God. Do you accept this?” The people say, “Yes, we will, we commit, we pledge to live by these commandments.” Then Moses takes the blood of the lamb and it is sprinkled by the priest on the people so they are sealed into the covenant. Now, at the moment when they’ve said, “we will obey these laws,” they are giving their consent to be governed by the revealed Word of God.

So, all true government, all righteous government, is based on the consent of the governed, because God governs us only by our consent. He is not a tyrant. He doesn’t Lord it over people. That is Satan’s project, but God doesn’t govern that way. So, the point is relevant for today. Any government which does not govern by the consent of the governed is an ungodly government by definition. It is satanic government. I am talking about China, Cuba, the Sudan and a lot of other places in the world.