During the last presidential campaign, Hillary Clinton decided to make the point that Barack Obama was all smooth talk with no substance. In her attack on him she said that “talk is cheap” and that words were nothing without action.

Her attack really riled Obama, and he fired back with these memorable words (which he plagiarized word for word from a speech by Governor Deval Patrick of Massachusetts):1

Obama was right, words do matter. They matter a lot. The old saying, “Sticks and stones may break my bones, but words will never hurt me,” is a lie. Words can hurt, and hurt deeply. They can even destroy. Just tell a child repeatedly that he or she is “dumb” and watch how it impacts their life.

Euphemisms have always been a part of language, as people have used substitute words or phrases to soften the impact of something they want to say. So, instead of calling a person a liar, one might say, “I think you may have your facts wrong.” Or, instead of describing a person as being fat, you might say the person is “plump” or “heavy set.”

Euphemisms are motivated by politeness. Instead of referring to a friend’s occupation as a “garbage man,” you might call him a “sanitation worker.” Instead of describing a family member as “retarded,” you might call him “mentally challenged.” Rather than ask how to find a “toilet,” you will probably ask directions to a restroom.

An interesting example of a euphemism can be found in the Bible. Since the name of God — Yahweh — was considered sacred by the Jews, they refused to pronounce it out loud. So, when reading the Scriptures orally, they developed a tradition of substituting the word, Adonai (Lord), for Yahweh. When the translators were preparing the King James Version, they decided to follow this tradition by injecting a translation code. When Yahweh appeared in a verse, they indicated its presence with the word, LORD (all in caps). When the word Adonai appeared, it was rendered as Lord.

Euphemisms constantly change. What was accepted as proper yesterday might be considered highly improper today. “Negro” became “Colored” and then was followed by “Black” and “Afro-American.” Today, the only acceptable term is “African-American,” a term I personally don’t like and refuse to use because I consider it divisive for us to think of each other in hyphenated terms. I am reminded of a t-shirt I saw on a teenage Black boy at a mall. On the back of the shirt, it read:

I’m not Black.
I’m not Colored.
I’m not African-American.
I’m a born-again Child of God!

In modern times the use of euphemisms has been elevated to a fine art through the development of political correctness, often referred to as “PC.” Despite its many negatives, there are some positive aspects to this movement. For example, it has been effective in subduing the use of ethnic slurs like Nigger, Gringo, Kike, Dago, Kraut, Mick, and Camel Jockey.

Even so, it can result in some crazy situations. Consider what happened at a City Council meeting in Washington, D.C. in 1999. While discussing the city’s budget for the next year, an aide to the mayor said he thought the budget was “niggardly.” That is a word that means “stingy” or “miserly.” Despite the fact that it was a legitimate word, all hell broke loose, and the aide was fired for speaking a “racial slur.” (He was later rehired.)2

Another positive aspect of PC is that it has motivated the change in a lot of job titles that were once male-dominated and reflected that fact in the name. Mailman has become “Mail Carrier.” Fireman is now “Fire Fighter.” A policeman has become a “Public Safety Officer.” Chairmen are now referred to as “Chair Persons.” But some of these make-overs have gotten out of hand, as when a gas station attendant is referred to as “a petroleum transfer technician” and a car wash worker is called “a vehicle-appearance specialist.”

This kind of nonsense prompted the comedian, Henny Youngman, to claim that his brother-in-law was a “diamond cutter.” His actual job was mowing the field at Yankee Stadium!

Unfortunately, most political correctness is not positive in nature. That’s because it is used by Liberals to promote their political agendas. They also use it as a powerful form of censorship. On most university campuses today, students have to be very careful what they say or else they can get in trouble with the thought police and even be required to attend sensitivity-training.

Liberals use political correctness to disguise sin and thus make it more palatable. A sexual pervert becomes a “sexually dysfunctional person.” A prostitute is referred to as a “sex worker.” Homosexuals are “gay people.” Gambling is “gaming.

“As you can see from these examples, Liberals use PC to soften the image of behavior they are sympathetic to but which the general public finds unacceptable, usually because the behavior violates Judeo-Christian principles which the Liberals hold in contempt.

PC becomes a form of censorship when it is used to force people into conformity. For example, a person could get into trouble today on the job or in school for making reference to an “American Indian.” The politically correct terminology is “Native American.” I personally refuse to use that term because I consider it to be nonsensical. I was born and raised in the United States. If I am not a Native American, then what am I? Some sort of alien? 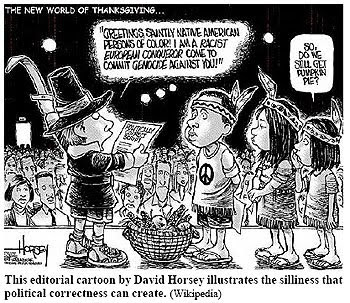 Another example of PC being used as a form of censorship can be found in the fact that more and more academic journals will not publish papers that use the terms B.C. or A.D. because these terms reference time to the birth of Jesus. Authors must instead use the terms B.C.E. and C.E. which stand for “Before the Common Era” and the “Common Era.”3

PC can also become very tedious, to the point of being downright silly. “Lame” became “crippled,” which was then renamed “handicapped,” which was subsequently replaced with “disabled.” But that was not good enough. Next came “physically challenged.” And now, believe it or not, the politically correct term is “differently abled.” Or consider the fact that the National Association for the Advancement of Colored People now considers the term “colored people” to be a racial slur!

PC can really become dangerous when it is used to advance a political agenda. And this is where the Obama Administration excels. Illegal aliens have suddenly become “undocumented immigrants.” Terms like “Islamic terrorism,” “Islamic radicalism,” and “Muslim extremism” have been banned. The Global War on Terrorism has become “The Overseas Contingency Operation.” (The what?) The words, “crusade” and “jihad” have also become taboo.4

An Ominous Shift in Vocabulary

Realizing how important words are to Liberals in general and to the Obama Administration in particular, you can understand the widespread concern among Christian leaders that has sprung up recently concerning a very subtle but monumental shift in vocabulary within the Obama Administration regarding religious freedom in our nation. It all began in November of 2009 when President Obama spoke in Texas at the memorial service for the victims of the Fort Hood massacre. A few days later he did it again in speeches both in Japan and China. What he did was to substitute the expression “freedom of worship” for “freedom of religion.”5

This is an exceedingly important change in terminology. So important, in fact, that in May of this year, the U.S. Commission on International Religious Freedom issued a report expressing grave concern about it.6

Some commentators believe that one of Obama’s motives is to throw a sop to China and the Muslim world where freedom of religion is denied but private worship is allowed in some areas. They believe Obama is giving a signal to these nations that we are not going to do anything about their denial of freedom of religion. Others fear he is signaling to the secular leaders in this country that he plans to aide and abet them in their demands for a crackdown on public expressions of religion in our nation.7

Whatever the motives may be, the shift in vocabulary is monumental and must be monitored carefully. Already, it has spread to other Obama Administration officials. In December of 2009, Secretary of State Hillary Clinton used the same terminology three times in a speech at Georgetown University. Here is an example:8

To fulfill their potential, people must be free to choose laws and leaders; to share and access information, to speak, criticize, and debate. They must be free to worship, associate, and to love in the way that they choose.

Notice how she referred to “freedom of worship,” not freedom of religion. And in passing, I might ask, “Since when has the right ‘to love in the way you choose’ become one of our basic human or constitutional rights?” Does this guarantee the rights of pedophiles and prostitutes and those engaged in polygamy and bestiality?

Where is the Obama Administration headed with this change in words? Remember, it was Obama himself who said, “Words matter!”

5) Paul Cooper, “Why is Obama changing ‘freedom of religion’ to ‘freedom of worship’?” www.rightsidenews.com.