On the Brink of Many Disasters

On Saturday, October 16th I was interviewed by Phillip Armstrong of the Prophecy Zone Radio talk show, broadcast on BlogTalkRadio. 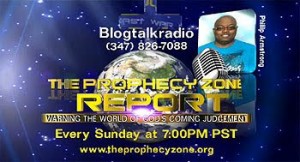 I came on as the second guest on this two part program. The first guest was financier Karl Denninger. Known as the “Ticker Guy” on his own radio program, he gave an alarming report of how the U.S. government’s stratospheric escalation of debt and creation of our own funny money could well bankrupt the country well within a single year. He also writes about this on his website at market-ticker.org.

Phillip and I then discussed a plethora of end time events approaching like a raging storm:

Listen to the whole program or skip to the second half hour just to hear our lively segment!

(My apologies for not having a written
transcript of this interview available.)