Truth of the Resurrection: No Fear of Death

Why do Christians have no fear of death?

To be clear, Christians have some fears related to death, but the actual fear of the destination after death is noticeably absent. Take for instance our blog’s October 2010 poll where I posed the question, “What is your greatest fear in dying?” Of the 446 respondents who answered, 151 (33%) said they honestly had no fears concerning death. Another 52% had fears, but they were related to what was being left behind, like the sorrow the family left behind would endure (22%), the pain of the actual death process (87, 19%), or how their body would be found (my vote, as my grandfather died on the jon!).

The remaining 16% were either unsure about their destination (28, 6%), going to Hell (23, 5%), going to Purgatory (1) and Judgment Day (26, 5%). Since Christians can be sure in their salvation that they will be going to Heaven to live with Christ forever and that there is only judgment for rewards, the remaining 16% of our respondents are most likely unbelievers. If any respondents were believers, they most likely struggle with eternal security questions, something all Christians at one time have to address, realizing finally that Jesus’ promise in John 10:28-30 is our firm foundation. And so, I feel confident that our poll supports the thesis that Christians have no real fears concerning what comes after death. 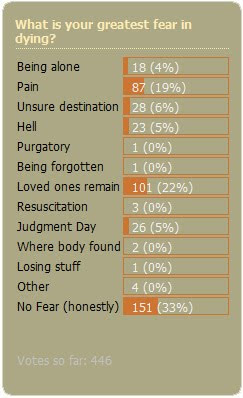 The Truth of the Resurrection

Lamb & Lion Ministries conducts a number of Bible conferences in the Dallas, Texas area each year. Our June 2010 conference theme was “Defending the Faith”.One of our guest speakers was Dr. Ron Rhodes, the founder and director of Reasoning From the Scriptures Ministries. With nearly 50 books penned and decades of public teaching, he is an expert on the Bible. As a former “Bible Answer Man,” he specializes in easy to understand answers to the really tough questions about the Bible and the defense of the Scriptures.

Dr. Rhodes’s topic at our conference was “The Truth of the Resurrection” (watch). He did a remarkable job explaining the reasons Christians have for not fearing death, while the rest of the world waits in trepidation. The following is the first segment of his presentation.

The Fear of Death

Not long ago I read an article about an Indiana cemetery that had a tombstone over 100 years old. On it were the following words, “Pause stranger when you pass me by, as you are now so once was I. As I am now so you will be, so prepare for death and follow me.” Alright, this guy had a sense of humor. Well, somebody else had a sense of humor because they scribbled some new words on there, and I thought they were very interesting. He wrote, “To follow you I am not content, until I know which way you went.” These are words for the wise!

I have always found that a person’s dying moments are very educational in terms of his worldview. What a person says right at the moment of death really tells you a lot about what they believe personally.

Many people are unprepared for that final moment. General John Sedgwick was on the front lines with his army when he said, “Don’t worry, boys, they couldn’t hit an elephant at this dist…” And then, he was a goner.

Some people show a sense of humor about death. Spike Mulligan said, “I told you I was ill.”

Ethan Allen, an American Revolution General, said, “Waiting are they? Waiting are they? Well, let them wait!” You see, his doctor had just told him, “The angels are waiting for you in Heaven.” He didn’t want to rush. He was trying to hang on until the last minute.

Some unbelievers are filled with despair, and this is the sad part. I remember Louis B. Mayer who was a big film producer in Hollywood who said, “Nothing matters, nothing matters.” This wasn’t someone who believed in the Resurrection.

Voltaire back in the 1600 and 1700’s said, “I wish I had never been born.” He implored his doctor, “I will give you half of what I am worth if you will give me six more months of life.”

Some unbelievers are simply unsure of what lies beyond the grave. For example, philosopher Thomas Hobbes said, “I am about to take my last voyage, a great leap in the dark.” How different it is for you and me. We know where we are going. We know that the Resurrection awaits us, but this guy had no idea what the Resurrection was about.

Some unbelievers are oblivious to their mortal danger. In fact, Charles Darwin said, “I am not the least afraid to die.” Now, I need to tell you that stories of a death bed conversion are untrue. I have looked into this very thoroughly and he died an unbeliever. Darwin had no idea what was coming.

Saddam Hussein was executed by hanging right before he died and he said, “There is no God but Allah, and Mohammad is God’s messenger.” The moment that his spirit departed the body he received a rude awakening, as he suddenly realized that Mohammad was a false prophet and Allah is a false god. He learned that Jesus Christ is the King of Kings and the Lord of Lords who was resurrected from the dead and who was ascended into Heaven and sits at the right hand of God the Father. He reigns supreme over things on Heaven and Earth. What a rude awakening, indeed!

No Fear of Death

How different it is for those of us who love Jesus. We don’t fear death.

I think about John Wesley who said, “The best of all, God is with us.” Wesley was looking forward to the Resurrection. He knew that he was going to be with God and he was going to have a brand new body. His mama Susanna Wesley had earlier said, “Children, when I am gone, sing a song of Praise to God.” Boy, that is a different tone all together, isn’t it? Joseph Addison, a writer who lived in the 1700, said, “See in what peace a Christian can die.” Lady Glenorchy, a lady who was very wealthy and gave out a lot of money to missionaries, said, “If this is dying, it is the pleasantest thing imaginable.” What a difference that is in terms of her future belief. Missionary David Brainerd said, “I am going into eternity and it is sweet to me to think of eternity.”

Look at it from God’s perspective. Right now we are just standing in tiny bubbles. We are not aware of all that is going on out there. But, from God’s perspective, He is looking down on this little tiny planet and souls are literally flying out of bodies. You see death is everywhere. That is why we take death seriously, and woe unto those who go into eternity without having taken it seriously.

In the next segment of Dr. Rhodes sermon on “The Truth of the Resurrection,” we’ll look at the various attacks by Satan against the doctrine of Jesus’ Resurrection.