Two of the titles in this list are often confusing and disturbing to Christians — namely, “God of this world” and “Prince of this world.” “How can this be?” people often ask. “Didn’t Jesus defeat Satan at the Cross? Hasn’t Satan been dethroned?”

The answer is that Satan’s ultimate defeat was sealed at the Cross, but it has not yet been realized in history. That’s why many years after the Cross, the Apostle John wrote, “…the whole world lies in the power of the evil one” (1 John 5:19). The writer of the book of Hebrews asserts that all things have been put in subjection to Christ, “but now we do not yet see all things subjected to Him” (Hebrews 2:8). 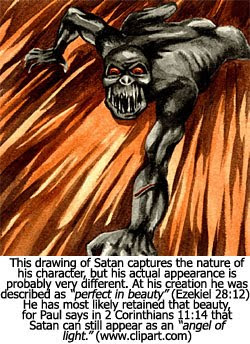 The de-throning of Satan as the prince of this world was guaranteed by Jesus’ victory over the Cross through the power of His resurrection. But Satan will not actually be removed from his throne until Jesus returns, at which time “the God of peace will crush Satan…” (Romans 16:20). The total defeat of Satan is a delayed benefit of the Cross, just as is the receipt of our glorified bodies.

A key aspect of the conflict between God and Satan is all about dominion. This earth was created for Mankind. God granted dominion over the creation to Adam and Eve (Genesis 1:28). But when the two of them succumbed to Satan’s temptation, that dominion was lost. Satan stole it, and he became the prince of this earth. That’s why he could legitimately tempt Jesus by offering Him all the kingdoms of the world if Jesus would only bow down and worship him (Matthew 4:8-10).

In the next segment of this “Satan’s Story” series, we’ll look at what the Bible says concerning Satan’s limited freedom and the prophecy concerning his ultimate fate.