Behold, He is coming with clouds, and every eye will see Him, even they who pierced Him. And all the tribes of the earth will mourn because of Him. Even so, Amen. “I am the Alpha and the Omega, the Beginning and the End,” says the Lord, “who is and who was and who is to come, the Almighty.”
– Revelation 1:7-8

How in your mind’s eye do you picture Jesus Christ?

Because the Christmas holiday is a celebration of the Savior’s birth, when picturing Jesus, one’s mind naturally depicts a baby. Popular nativity scenes portray Luke’s description of Jesus as a tiny babe swaddled in strips of cloth and lying in an animal trough. His parents, Mary and Joseph, gaze down adoringly. Shepherds and wise men gape in amazement from their perches along stone walls. The heavenly host fly above majestically singing, “Glory to God in the highest, and on earth peace, goodwill toward men!” (Luke 2:14).

While the angels add a sense of the divine to the Nativity Story, and Hollywood has added the additional touch of a beam of Bethlehem starlight spotlighting the little family, for the most part, the scene is rather pastoral — a peasant family sitting in the hay among smelly animals in some sort of cave. It is meant to be a very humble scene.

Because Christmastime happens to also be celebrated among cultural Christians and even non-Christians, the humble imagery of the baby Jesus remains in the mind’s eye. That is, until Easter, when Jesus is portrayed altogether differently. Now He’s all grown up, fully bearded, but frail and emaciated. His lithe body suffers from beatings and is covered in lash marks. He is nailed naked to a tree where he limply hangs bleeding. And there Jesus remains on that cross in the mind’s eye, at least until Christmas returns and resets the mental image of Jesus back into a tiny baby again. And the circle continues.

One of the most popular scenes from the movie Talladega Nights is when the lead character, racecar driver Ricky Bobby (played by Will Ferrell), says grace with his family over a feast of fast food. He begins each praise and prayer request with “Dear Lord Baby Jesus” until his wife, Carley, impatiently interrupts with: “Hey, you know, Sweetie, Jesus did grow up. You don’t always have to call him ‘baby.” Incensed, Ricky responds with: “Well, I like the Christmas Jesus best and I’m saying grace. When you say grace you can say it to grownup Jesus, or teenage Jesus, or bearded Jesus, or whoever you want.” Even Ricky’s father-in-law, Chip, chimes in with: “He was a man! He had a beard!” From there, the conversation degenerates as each family member describes the “Jesus” they prefer: a ninja fighting off evil samurai, sporting giant eagle’s wings, singing lead vocals in a band, and so on.

Christians watching this movie tend to squirm dumbfounded over whether this scene borders on blasphemy or comedy, and yet one cannot help but come away with a profound revelation — most people have created their own personal “Jesus.” People see Jesus in the only way they’ve ever encountered Him, and that’s often only during Christmas and Easter. Jesus remains to most as either a helpless baby or a dying man.

Besides the Jesus portrayed at His First Coming in the New Testament, did you know that Jesus can be found making appearances in the Old Testament?

Most forget that the Son of God has always existed coeternal with the Father and Holy Spirit. His origins stretch back beyond the beginnings of the Creation (Genesis 1:1; John 1:1,18; 8:58; 16:28; 17:5; 1 Timothy 1:17). And, we know from Scriptures that Jesus just didn’t sit there in Heaven idly waiting to be “born of a woman.” The saints of the Old Testament era perceived the Son of God quite differently — as the “Angel of the Lord.” Should you happen to be wondering what the theological term is for the visible appearances of Jesus Christ in other forms prior to His incarnation, that would be the word “theophany.”

We know that the Angel of the Lord wasn’t like any other kind of angel because He readily received the worship due only to God Almighty. By contrast, in the book of Revelation, the Apostle John “was in the Spirit on the Lord’s Day,” meaning the Holy Spirit transported John off of Patmos and far into the future to witness the Day of the Lord (1:9-10). He quickly became overwhelmed by all that he saw. Flustered, John made the mistake of attempting to worship his angelic guide, who then immediately pulled the Elder to his feet and cried out: “See that you do not do that. For I am your fellow servant, and of your brethren the prophets, and of those who keep the words of this book. Worship God!” (22:9).

God’s angels never accept the worship of man, or else fall hard after the folly of Satan’s demons. And yet, the Angel of the Lord freely accepted worship. The Old Testament saints were all too happy to proclaim they had seen the very face of God. “So Jacob called the name of the place Peniel: ‘For I have seen God face to face, and my life is preserved'” (Genesis 32:30).

The use of the label “angel” can appear problematic for us today when it comes to applying it to the Son of God, but remember that besides being used as a reference to Heaven’s servant caste, the label “angel” can transcend God’s angelic beings and also be used to describe the duty of God’s messenger. Jesus’ duty in His Old Testament appearances was for the purpose of serving as a messenger at vital key moments in Israel’s history. It would appear these events were just too important to send an everyday angel, and so God Himself appeared under the title of the Angel of the Lord. And so, as Herbert Lockyer explained, when those ancient saints pictured Jesus they saw Him as:

“The angel of the Redeemer is now arrayed in mortal flesh, He like an Angel stands, and holds the promises and pardon in His hands; commissioned from the Father’s Throne, to make His grace to mortals known.”

The beauty and majesty of God’s prophetic word introduce us to a third Jesus whom few rarely if ever encounter because they never study Bible prophecy. In the prophecies concerning Jesus’ Second Coming, human frailty is stripped away revealing Christ’s true glory, a divinity that the Apostles could only glimpse at the Transfiguration. Christ’s true form stunned James and John into silence and Peter into babbling. The Apostles witnessed Jesus in His eternally glorified state. 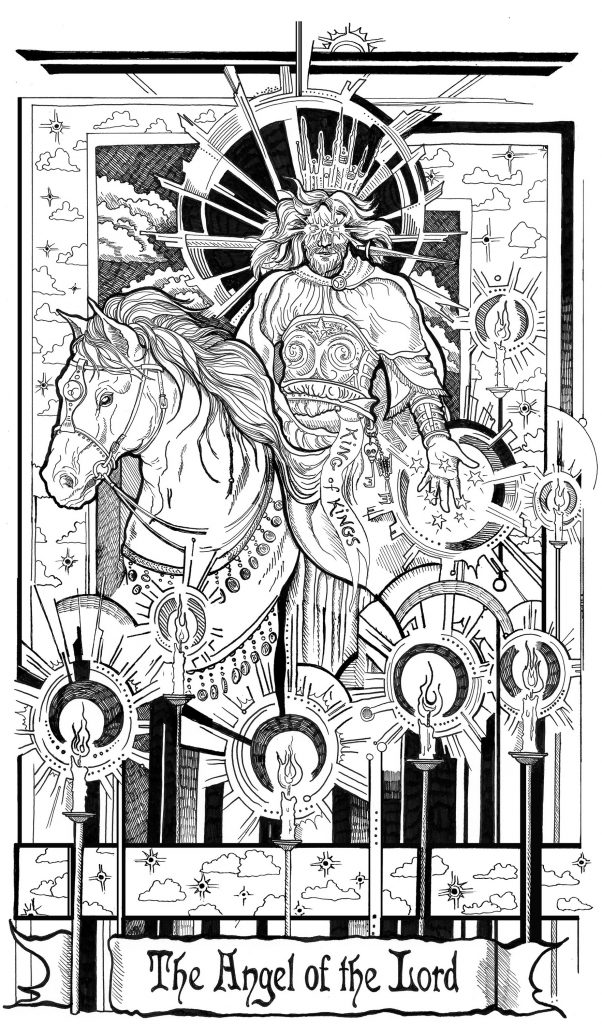 “The Angel of the Lord” by Christian artist Shalis Stevens

With a self-introduction in Revelation 1:8 of, “I am the Alpha and the Omega, the Beginning and the End… the Almighty,” Jesus breaks out of the box of babyhood with His claim to agelessness and ultimate power.

Revelation 1 continues to describe Jesus as, “One like the Son of Man,” so only resembling frail humanity in appearance. Clothed with a garment and girded with a golden band, His hair gleams bright white like wool and His eyes blaze like flames. Jesus’ feet glow like brass refined in a furnace and His voice thunders with the sound of many waters. Jesus’ holiness blinds like the sun in its strength. The Jesus the elderly Apostle John encountered caused John to fall at His glowing feet as a dead man!

Jump ahead to Revelation 19 and you’ll yet again stand in awe of the description of Jesus as He triumphantly returns to earth as a warrior king dispensing righteousness as the Judge waging war against Satan’s forces. Jesus bursts out of the heavens riding His white war charger as the armies of Heaven trail endlessly behind Him. Jesus’ eyes blaze like fire, atop His head sit many crowns, His robe is dipped in blood, and He strikes the enemy nations dead with the sword of the Word protruding out of His mouth. Emblazoned on Jesus’ thigh is the title: “KING OF KINGS AND LORD OF LORDS.”

Often it is more palatable to paint Jesus inside the box of one’s mind as a little baby or suffering servant, or keep Jesus appearing like an everyday angel as some cults do, but are those the real Jesus? In part, yes, for they were as much a part of Jesus as our own baby, childhood, and teenage selves once were to us then, but are no longer.

Jesus eternal is the Jesus of Bible prophecy. So, like John, stand in awe of your Savior revealed!